Understanding Naga conflict: How will the peace talks proceed? 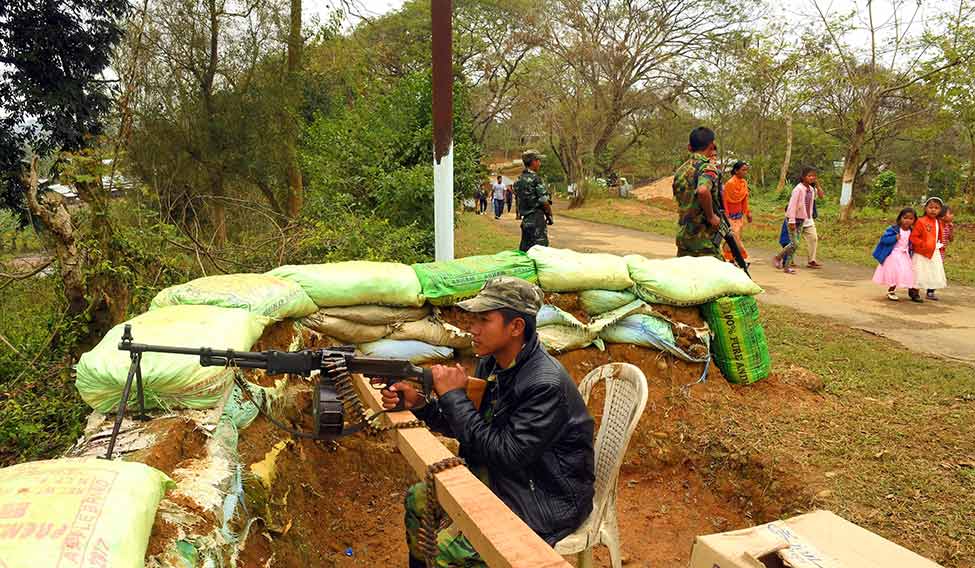 A scene from inside Hebron, the NSCN-IM stronghold | Salil Bera

On Friday, Nagaland Chief Minister Neiphiu Rio claimed a "breakthrough" in the ongoing negotiations to resolve the state's decades-old insurgency problem. "It is a historic moment and an occasion of great joy for all Nagas and the nation as a whole. Peace will now pave the way for genuine progress and true nation-building," Rio said in a tweet. Add to that, the media cell of Naga National Political Groups (NNPG), a conglomerate of seven Naga organisations holding talks with the Centre, said in a statement that, in the course of negotiations, the Union government had endorsed the usage of Naga emblem/flag specifically for cultural identity within the Naga homeland. "The Naga flag is a political symbol and cannot be confined to socio-cultural activities. Therefore, together in one voice, Nagas would pursue it politically and democratically. The flag, since the dawn of Naga political consciousness, has ever been an expression of our political identity and aspirations," it stated.

But, in a statement, the Union home ministry said that it has come to the government’s notice that lot of rumours and misinformation is being spread in the media including social media that the final Naga settlement has been arrived at and will be announced soon. The ministry said talks were yet to be concluded.

The talks to find a lasting solution to the seven-decade-old insurgency problem in Nagaland continued past the October 31 deadline on Thursday, with the Centre’s interlocutor and Nagaland Governor R.N. Ravi holding discussions with NSCN-IM, the major insurgency group in the region.

While the dialogue with the Naga National Political Groups (NNPG) is said to be over, talks with the NSCN-IM, has been centred on its demands for a separate flag and constitution for the Nagas.

The conflict can essentially be brought down to an armed revolution since 1946 for an autonomous Naga state constituting Nagaland and areas of Arunachal Pradesh, Assam and Manipur—aka the Greater Nagalim. After British conquest in 1881, Naga National Council (NNC) was formed in 1946, and its extremely influential Angami Zapu Phizo announced the sovereign Naga state in 1947. There were issues related to an agreement (for 'accession') signed between NNC and the government ahead of independence; later, a supposed plebiscite, which the Centre refused to recognise, claimed that over 90 per cent of Naga people supported independence from India.

The conflict turned violent and the Armed Forces Special Powers Act (AFSPA) was implemented in 1958. NNC signed the Shillong Peace Accord in 1975, ending violence temporarily, but breakaway factions formed the National Socialist Council of Nagaland (NSCN) which refused to recognise the Shillong Accord and continued the conflict. The NSCN split and split further, forming NSCN-IM (under Isak Chishi Swu and Thuingaleng Muivah) and NSCN-K (under SS Khaplang). Both Khaplang and Isak Swu have passed away, leaving NSCN-IM the main player in the talks.

Currently, groupings like the NNPG—which includes outfits like the Federal Government of Nagaland and the Naga Nationalist Council—and NSCN-K, along with NSCN-IM, are involved in the peace talks.

How did different governments react?

The Nagas had been demanding sovereignty even before India’s independence, claiming that they had not been part of British India. Pandit Nehru rejected the demand, but he kept Naga matters under a director in the ministry of external affairs. Indira Gandhi offered them “anything but independence”, but transferred the issue to the home ministry, further angering the Nagas.

The first olive branch was waved by P.V. Narasimha Rao. His government’s secret talks with the NSCN-IM was followed by similar interactions by the H.D. Deve Gowda government, leading to a ceasefire agreement concluded by the I.K. Gujral government. Atal Bihari Vajpayee recognised the “unique history and the situation of the Nagas” and created a ceasefire monitoring group in 2001. Manmohan Singh offered a “non-paper proposal’’ to the NSCN-IM. And, Narendra Modi got a framework agreement signed. D.K. Pathak, a 1979 batch IPS officer of the Assam-Meghalaya cadre, is monitoring the implementation of the ceasefire ground rules.

PM Modi, in 2015, set the groundworks for the secretive Naga framework agreement. THE WEEK’s senior special correspondent Namrata Biji Ahuja had accessed the major clauses in the deal: The final accord will spell out permanent resident status for the Nagas, like in Jammu and Kashmir. Only permanent residents will have the right to vote and acquire land in Naga territory. The Union government will create an autonomous district council with financial autonomy on the lines of the Bodoland Territorial Council for the four hill districts of Manipur (Senapati, Tamenglong, Chandel and Ukhrul). Whether it will be done under 6th schedule of the Constitution or a state act is yet to be discussed.

What is the way forward now?

NSCN-IM demands for a separate flag and constitution are major irritants for the Centre. So is the demand for a separate Nagalim. The central government has already rejected the NSCN-IM's demand for unification of Naga inhabited areas located in Manipur, Arunachal Pradesh and Assam. The three northeastern states have also vehemently opposed it. The talks were convened in Delhi in a bid to iron out differences, particularly on the demands for a separate flag and Constitution for the Nagas, which have already been rejected by the Centre. Ravi, in a statement last week, had said that a mutually agreed draft comprehensive settlement, including all the substantive issues, was ready for signing the final agreement. “Unfortunately at this auspicious juncture, the NSCN-IM has adopted a procrastinating attitude to delay the settlement, raising the contentious symbolic issues of separate Naga national flag and Constitution on which they are fully aware of government of India’s position,” he had said.

Multiple reports, citing NSCN-IM insiders, however, claimed that NSCN-IM has agreed to a deal sans a separate Constitution and a flag that will be used only for cultural purposes. Only the future can tell us how the conflict will play out.