Peace accord is only with NSCN(IM), not Nagas 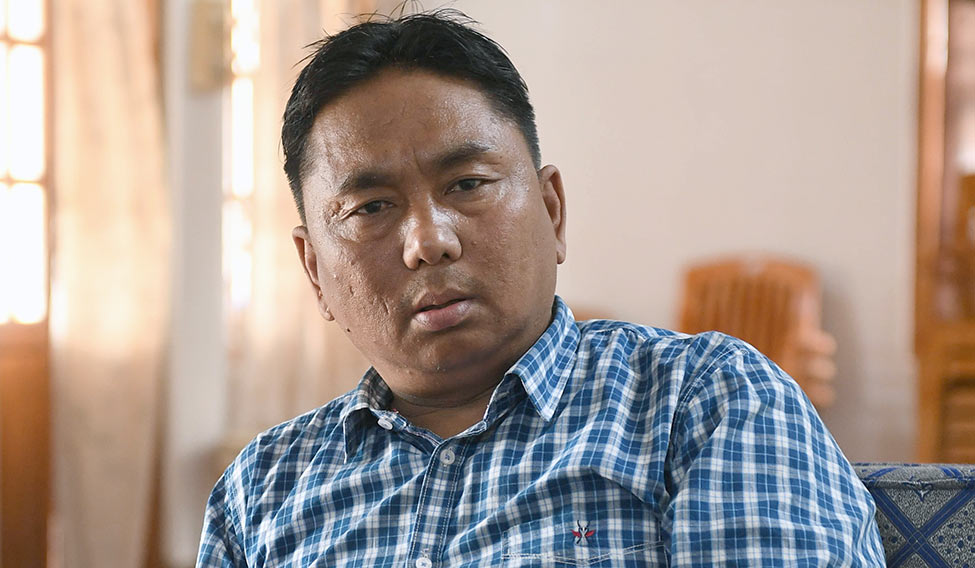 Interview/Alezo Venuh, envoy of the collective leadership of NSCN/GPRN

An hour and half drive through the jungles of Dimapur lies Khehoi camp, the headquarters of rival NSCN quarters (opposing NSCN (IM)), led by Kitovi Zhimomi and Neakpao Konyak. They were part of the Myanmar-based NSCN (Khaplang), which had a ceasefire with the government of India. When Khaplang violated the ceasefire, the duo parted ways with him, but instead of joining the NSCN(IM), they formed their own faction, calling themsleves NSCN/ GPRN. They have been dubbed by the security forces as NSCN(KN). They refuse to be part of the ongoing political negotiation since the framework agreement between the government and the NSCN(IM) was signed without consulting them

The faction has an army of 5000, armed with automatic weapons, machine guns, rocket launchers and M16 assault rifles. Their camp, though a mirror image of the NSCN(IM) headquarters of Hebron, is smaller and more difficult to approach. A solider carrying a rocket launcher moves around in the highly militarised zone of the civilian headquarters.

The faction minces no words while blaming the government of India for not initiating a dialogue with Khaplang, which forced him to abrogate the ceasefire."Simply signing a ceasefire does not offer a solution," says Alezo Venuh, envoy of the collective leadership of NSCN/GPRN. “There has to be a conducive atmosphere to initiate a dialogue and find a solution. No one consulted us when the framework agreement was signed. We cannot be part of something that is not known to us. It will be suicide for us."

Any slip up in the peace process that does not meet the demands of the Nagas of Nagaland may cost the government of India dear, causing more bloodshed among the Nagas. Modi and Muivah (Thuingaleng Muivah of the NSCN(IM)) , who have signed the framework agreement, may need to take this in mind before announcing the final settlement.

Muivah knows it too well. His vice president Kholi was with Kitovi months ago. Together, they were part of the rival NSCN(K) faction. It was only when Myanmar based S.S.Khaplang abrogated the ceasefire and unleashed violence on Indian security forces that Kholi decided to return to the IM fold.

Says Akato Chophi, Kilo Kilonser (minister) of public relations in NSCN(KN), “How can one group decided the fate of the entire Naga community? Similarly, Nagas from Manipur cannot decide the fate of Nagas from Nagaland. Our government controls only 11 districts of Nagaland. If integration is not possible, then we have every right to decide the future of Nagaland.”

For the fighters at Khehoi, the scars run deep. 53-year-old Khuheshe Sumi says the Indian occupational forces raped their sisters and daughters. “My wife is an advocate. My elder son is completing his education and he will soon join, taking my place,” he says.

35-year-old Sungjemla who is serving in the NSCN(KN) army, switched from the IM to KN in 2015. “I had undergone training in the NSCN(IM) camp in 2003. My father and the local church had recommended my name to join the group. Now, I have switched to KN because I want to fight for the Naga people's rights in Nagaland. After all, it is their struggle,” she says. “When I was in IM, I never visited my family. But since I have joined KN, I have been home twice,'” she says. Sungjemla's father is an ex-Naga Regiment solider of the Indian Army.

“The Indian Army beat my father three times, accusing him of supporting the underground forces. Atrocities were unleashed on the public after AFSPA was imposed. After he retired, he volunteered to serve the movement.We want peace,'' she says.

In the Khehoi camp, THE WEEK speaks at length to NSCN/GPRN envoy Alezo Venuh. Excerpts:

What are your reservations about the Naga peace process undertaken by the Indian government?

Has the government of India tried to initiate a dialogue with you?

The Nagas have been fighting for their sovereign rights before India got independence. We have signed a ceasefire agreement with the government of India because there is a problem. But simply signing a ceasefire does not offer a solution. There has to be a conducive atmosphere to intiate a dialogue to find a solution. The Nagas are fully prepared. Peaceful co-existence has to come about through a process of dialogue. But unless you come to the negotiating table, what can we say?

What is your demand?

Our activities are restricted to state of Nagaland. We don't poke our nose where it is does not benefit us. We have said that the accord between the government of India and the NSCN(IM) is only with IM and not the Nagas as a whole. This framework agreement, signed in 2015, has not been made known to Nagas. No one consulted us when it was signed. Later through some channel they reached out. We said, "How can we be part of it unless it is made known to us? It will be suicide for us."

What lies ahead now?

I think the government of India has failed to address the real issue and reach out to the real stakeholders. The classic example is why Khaplang and other members have failed to continue with the ceasefire. They were forced to abrogate it. Khaplang is now sheltering many northeast groups there across the border. India needs to know that a time may come when the situation may force us to take any step.

How big is the threat from NSCN-K?

Khaplang had signed a ceasefire, which he was forced to abrogate after a lack of dialogue. He has access in Myanmar, where he is giving shelter to ULFA, NDFB, and many groups from Manipur like the Meitei revolutionary forces. Recently, there were attacks on security forces. We had no hand in it. We don't indulge in violence.

When you go for a ceasefire extension with the government of India in mid-April will you tell the government that the ceasefire was abrogated by Khaplang because of their failure in reaching out to him?

That we will be the strong message conveyed by our representatives who will be meeting the Indian leaders. Our leaders have made it clear that we would support any solution that is acceptable to the Nagas. At the same time, we have made it known that no solution should bring a repeat of what happened in the past. We don't want bloodshed again.

Where do you get the funds to run your government?

Our movement started a long time ago. People donated out of free will. We continue the same way. Our tax is not imposed.

How do you take contributions from the public?

There is a ration tax where each household contributes an amount—around Rs 120 per year. They either give in cash or products like rice. Then there are business tax, forest tax and such. Business tax is fixed at five percent, but you can't expect a fixed amount. So we negotiate and the people give what they choose.

Don't you think people are being burdened by tax?

We are well aware that, apart from us, NSCN(IM) and other groups collect tax. We don't want to overburden the people . We ensure than it does not.

Do you think it is high time that a resolution is reached?

The people are eager to reach a solution. But the government of India use their agencies in different ways, to divide the Nagas.

How supportive is China?

There are record that our leaders approached China in the past. The Chinese help was there and they supported us. But that is a different chapter now.

Don't you think that factionalism is weakening the movement?

Yes. As of now, we have NSCN(K), NSCN/GPRN, NSCN (Reformation) and NSCN(IM). Recently, we have initiated a Naga National Political Group (NNPG) and we are reaching out to the civil society, especially in Nagaland, and talking about unity.

Your form could not be submitted.
This browser settings will not support to add bookmarks programmatically. Please press Ctrl+D or change settings to bookmark this page.
Topics : #Inside secret Naga state | #Nagaland | #terrorism