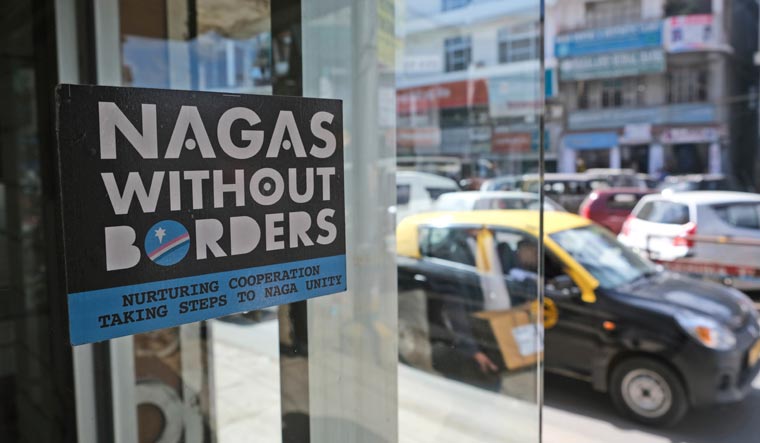 Intelligence reports reveal that top NSCN(IM) commanders along with some cadres have gone to Yunnan province in China seeking support as government hardened its stand on the Naga deal without a separate flag and Constitution. Sources in the intelligence agencies said that the group that has been camping in Yunnan includes ex-Naga army chief Phunting Shimrang and his two associates Hanshi, a self styled deputy commander of the rebel outfit and Absalom Assissi.

The intelligence sources said that Shimrang and his commanders are accompanied by nearly a hundred cadres.

Sources in the rebel outfit confirmed that Shimrang and his associates are trying to hold dialogue with their support base in Yunnan for unity towards the Naga cause and autonomy. The sources, however, denied all speculations and reports that the present NSCN(IM) chief Anthony Shimray had left Hebron, the headquarters of the insurgent outfit, to move to an undisclosed location. Shimray is in Hebron, a top leader said.

A senior leader of the NSCN(IM) also said that the cadres accompanying Shimrang and his commanders were not from camp Hebron. The rebel leader also denied that a hundred cadres had crossed over to Yunnan, as claimed by intelligence sources , saying the actual numbers were much less.

Meanwhile, various cadres of the NSCN(IM) have reportedly been camping in the India-Myanmar border areas ever since the discussions between NSCN(IM) general secretary T.H. Muivah and Nagaland Governor and interlocutor R.N. Ravi picked up steam over the last one month with the latter making it clear that any solution or peace accord will be within the framework of the Indian Constitution and demands like a separate flag and Constitution cannot be accepted. The outfit was fearing crackdown if the proposed accord fell through even as security sources stressed that they would take all precautions to ensure the ceasefire remains intact.

Meanwhile, Shimrang's latest move to reach out for support in Yunnan province gains significance as the ex-Naga army chief in an interview to THE WEEK in April, 2017, had said that their movement had always been suppressed by Indian government by calling it an ''internal problem'', but it was only when the outfit had reached out to China in the early days of the Naga struggle, that the government woke up to the issue.

Seeking an early resolution to the decades-old problem, Shimrang had said, ''Will India wake up only if the Naga army starts doing that again?”

Shimrang had said that even if a settlement was not reached that time, the movement would not wear out. ''Even if only 30 to 100 people are left, we will start again,'' he had said.

Two years later, it seems Shimrang is trying to do just that. However this time, it may be difficult for the rebel outfit to justify its China move given the fact that Ravi has decided to resolve the Naga problem within a set timeframe and the government seems determined to resolve the issue through peaceful means. Will the NSCN(IM) be willing to resolve the sticking points and pick up the offer of the Indian government or will it be responsible for delaying a peace accord? All these are expected to become clear in the next few months.