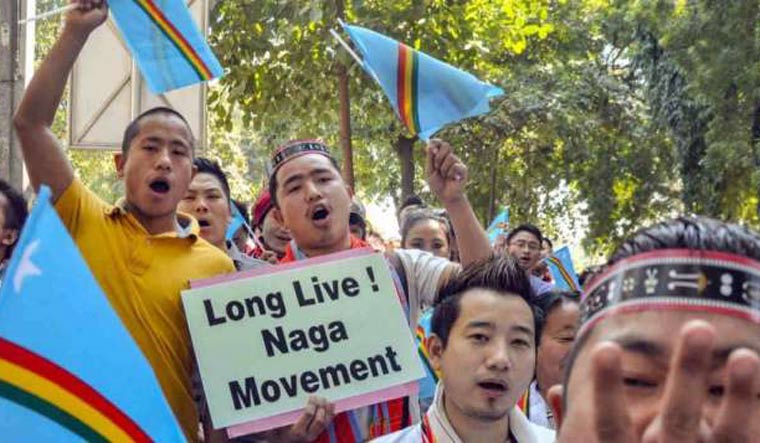 The much-hyped framework agreement, signed between the Modi government and the largest Naga insurgent group, NSCN(IM), has entered the sixth year on August 3 without any headway into arriving at a lasting solution to the decades-long insurgency. The unfulfilled promises of the framework agreement has resulted in huge trust deficit, dissatisfaction, disunity and uncertainty among the Nagas. If left unaddressed, these can impact peace and stability in the region.

Firstly, there is a logjam over the critical issue of protecting the political identity of the Naga people. The NSCN(IM)  says their unique identity is represented by the Naga national flag and Yehzabo (Constitution), but the government has made it clear that all negotiations will be under the framework of the Indian Constitution. Successive governments in the past decades had failed to arrive at a consensus on the issue, and the current BJP government too has been unsuccessful in bridging this divide in the last six years. The problem has been compounded by deep mistrust on both sides over the interpretation of the framework agreement that was signed between government-appointed interlocutor R.N. Ravi and NSCN(IM) general secretary T.H. Muivah in 2015.

According to the NSCN(IM) leadership, the Nagas weren't obstinate and have taken the Indo-Naga political talk this far, but now it is the interpretation of the framework agreement that has resulted in a deadlock. ''The pressing irony is that without the Naga national flag and Yehzabo, everything discussed and agreed upon shall be nullified. More than that, the framework agreement should not be twisted to project that it is under the purview of Indian Constitution,'' said a statement issued by the NSCN(IM).

The framework agreement was a fresh attempt, after more than two decades of the Indo-Naga political negotiations, to find a credible and lasting solution to the decades-long insurgency and find a middle ground on the political rights of the Naga people who are demanding a greater  Nagalim. But a shadow of mistrust has come over it.

The ball is the government's court. The various Naga groups seem to be united in their demand that what has been committed in the framework agreement should be taken to its logical conclusion.

On August 3, there were several calls for bandhs by the NSCN(IM) and United Naga Council to reiterate their support to the framework agreement.

Milan Shimray, general secretary of United Naga Council, said the Naga groups are looking for a peaceful resolution to the problems. ''We are committed to the ceasefire agreement. We are demonstrating in support of the framework agreement and for its failure to materialise even after waiting for six long years by the negotiating parties,'' he said.

The cracks in the Naga unity in the last six years has added to the problems. The government created at least two forums to carry forward the talks with the Naga groups after signing the framework agreement with NSC(IM) on August 3, 2015.

Instead of including all Naga groups under one umbrella,  the interlocutor signed an agreement with a working committee of six Naga National Political Groups (NNPGs) led by its convenor Kitovi Zhimomi in 2017.

The result is that today, both the NNPGs and the NSCN(IM) are unhappy with the way the talks have come to a standstill. The breakpoint came last year.

''The official talks have not taken place for months now. The government should explain the way forward . A lot of time and effort has gone in from both sides and the deadlock is creating a lot of uncertainty,'' said Elu Ndang, general secretary of Naga Ho Ho.

Presently, the NSCN(IM) is holding informal discussions with the Intelligence Bureau officials. There are efforts going on both sides to bring the Nagas together on the talking table—a task that could have been attempted before the framework agreement was signed. ''Unless there is unity among the Naga groups, there cannot be any lasting solution to the insurgency,'' said an NSCN leader.

The seeds of discord were sown when the NNPGs showed signs of agreement while the NSCN(IM) was still not on board in 2019. The NSCN(IM) went on to accuse the government of a divide and rule policy. The Naga unity witnessed a jolt and the talks failed after the agreement itself came under question.

It is clear that the final negotiations of Naga insurgent groups have to be held with the government of India. Now, with the framework agreement in hand, none of the Naga groups are looking for a temporary solution.