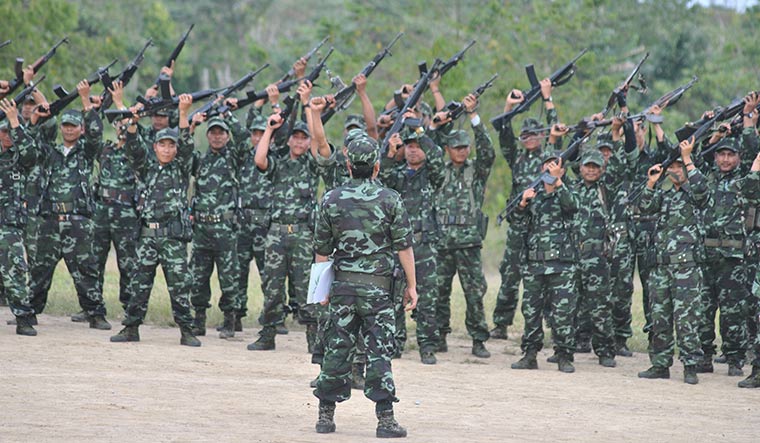 There is fresh trouble brewing in the backyard for the government which is marching towards bringing an end to insurgency movements in the northeast. A fresh step in that direction was the signing of the historic accord with one of the dreaded insurgent groups of Assam, the National Democratic Front of Boroland (NDFB). Last week, the government also signed the Bru-Reang refugee agreement to resolve the contentious issue of resettlement of the Bru refugees in Tripura.

While there was good news, the developments in Nagaland were causing worry to the security establishment as the decades old Naga insurgency problem was threatening a fresh revival.

There is a standoff between the biggest Naga insurgent outfit NSCN(IM) and the National Investigation Agency over the latter’s move to arrest Alemla Jamir, cabinet kilonser (minister) in the NSCN(IM)-led government of the People's Republic of Nagalim (GPRN), who has been charged with “terror funding”.

The outfit issued a public statement on Sunday condemning the arrest and criticised the “carrot and stick policy”of the government, and warned of a pre-ceasefire situation of increased militarisation. The NSCN(IM) said the latest move by the NIA could jeopardise efforts towards maintaining peace in the northeast.

Two days later, a fresh flashpoint emerged on Tuesday after the NIA filed a chargesheet against four accused—Luckin Mashangva, Jai Kishan Sharma, Yangte Josaham and Napong Jenpi alias Jenpi—under various sections of UAPA and Arms Act in a case related to the ambush on the convoy of Khonsa MLA Tirong Aboh and others on May 21 last year by armed cadres of NSCN (IM). The ambush took place near Pansum Thong village in Tirap district of Arunachal Pradesh, while the convoy was moving towards Khonsa from Dibrugarh. In the incident, a total of 11 persons, including Aboh, were killed while three other persons sustained injuries, said the NIA.

On Tuesday, the NIA said the investigation has established that members of NSCN(IM) conspired to commit the terrorist act killing the MLA and others. “Investigation further established that the terrorist act was a result of larger conspiracy due to opposition by the MLA of anti-development and extortion activities of NSCN(IM) in Tirap district,” said the NIA.

The fresh arrests have put the spotlight back on the leadership of the NSCN(IM) led by T.H. Muivah who is holding peace talks with the government to stitch peace accord.

The outfit has said accusation against Jamir has come as total shock considering more than two decades of political dialogue with the NSCN.

It is only when the government starts respecting its commitment, not otherwise, can the political dialogue move forward in the spirit of 'mutual trust and understanding', said the statement issued by ministry of information & publicity (MIP) of government of the People's Republic of Nagalim (GPRN).

The outfit warned that “the situation will certainly go out of control if the government does not take corrective measures in the true spirit of the ongoing political dialogue with the NSCN.”

The press statement, issued from Hebron, the largest camp of the outfit, said the unrestrained excessive activities of NIA will certainly reverse the clock back towards the pre-ceasefire period which witnessed intensive militarisation, violent conflict and serious violation of human rights.

The tension with the Naga insurgent group is bound to escalate matters, said a security official, adding that the ceasefire is of utmost importance at this time to maintain peace and tranquility.

Meanwhile, there is hope as the government and the security agencies are keeping a close watch on the developments.

The NSCN said its statement has been necessitated in view of the urgency to save the political dialogue instead of creating distrust at this stage and demolishing the political negotiation.

The outfit said after decades of suppressing the Nagas within the purview of India’s internal law and order issue, the government of India later on acknowledged that the Indo-Naga issue was political.

It said it was only after the change seen in India’s policy that the NSCN agreed to have political dialogue with the government of India in 1997. The political dialogue has travailed more than two decades and some positive steps were taken with the official recognition in 2002 of the “unique history and situation” of the Nagas and the signing of the Framework Agreement (FA) on August 3 , 2015.

“However, much to the indignation of NSCN, the more than two decades of ceasefire and political dialogue has witnessed innumerable violation of ceasefire ground rules by the GoI (violations which are well documented), its security forces and its intelligence agencies, particularly the National Investigation Agency (NIA) whose power has been increased in the name of checking terrorism and protecting India’s national security. The NIA has been acting with impunity and intensified its activities, particularly after the ultimatum served by the GoI interlocutor in July, 2019 and the deliberate rejection of the FA principle wherein the sovereign rights of the Naga people to use its national flag and constitution has been officially acknowledged”.

It sought to remind the government that the memorandum of understanding (MoU) signed on November 18, 2002, in Milan in Italy had agreed to lift the ban on NSCN under the Unlawful Activities (Prevention) Act and it was also understood that as the dialogue with the NSCN progresses further and environment becomes more peaceful, other rules, regulations and acts will be reviewed in due course of time. “The MoU also agreed that the NSCN leadership, on the invitation of the Prime Minister of India, will come to Delhi in December, 2002 to carry forward the peace dialogue in a spirit of mutual trust and understanding and ensure the safety, security and well-being of the NSCN leaders during their visit to Delhi.”

However, of late the activities of GoI intelligence agencies, particularly the NIA, has definitely created trust deficit in the minds of the Nagas and the NSCN, it said .

Meanwhile, there was good news last week when Home Minister Amit Shah and Assam CM Sarbananda Sonowal signed the tripartite agreement with the representatives of factions of the banned organisation on Monday. The NDFB factions are led by Ranjan Daimari, Govinda Basumatary, Dhiren Boro and B Saoraigra.

Coming as a major achievement, as many as 1,550 cadres of the insurgent outfit along with 130 weapons will surrender on January 30. This is expected to bring an end to the decades long violent movement for a separate Bodoland .