Ravi enjoys the trust of both Modi and the Nagas 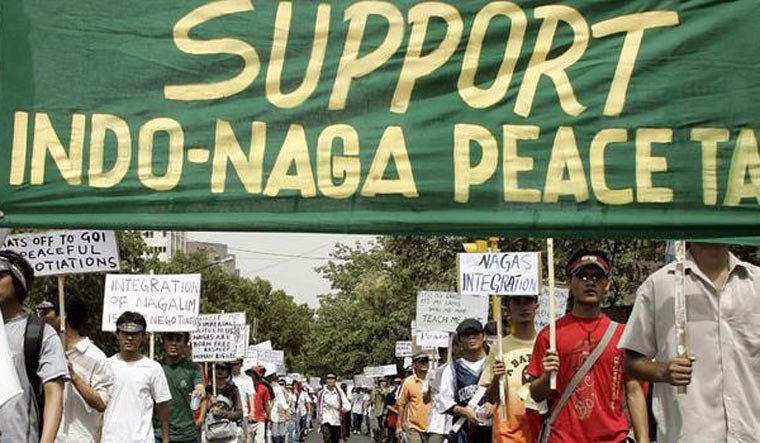 The Naga insurgent groups led by the NSCN(IM) see a ray of hope in government-appointed interlocutor R.N. Ravi taking over as the governor of Nagaland. The reason: Ravi enjoys the confidence of Prime Minister Narendra Modi and may be in a better position to take the ongoing peace talks to a final conclusion.

Top sources in the NSCN(IM) said that Ravi’s appointment as governor might not produce the desired results, but the underlying hope is that he can play a vital role in a final agreement, since he enjoys the trust of both Modi and Nagas.

“It is like two sides of the same coin. It can be bad or good. However, I want to see the positive side. R.N. Ravi can play a vital role as he enjoys the trust of both Modi and the Nagas,” a senior NSCN(IM) leader told THE WEEK.

Senior security officials said Ravi’s first challenge would be to steer the Naga insurgent groups, who have a ceasefire with the government, away from their counterparts in Myanmar to ensure there is clear distinction between the insurgents on the Indian side and those in Myanmar, who are supported by China .

P. Chuba, the president of Naga Hoho, the Apex Naga tribal body, told THE WEEK that he wants to view the development in a positive way.

“Ravi may be the most capable person to implement whatever transpires in the agreement as governor, provided the government of India agrees to a political settlement,” he said. There are two main talking points that will be discussed between the Naga groups and the government—the constitution of Nagas and their demand for a separate flag.

“Now, it depends on the willingness of the government of India to take the talks forward on these two subjects. It is to the benefit of Ravi and the Naga people that he remain the interlocutor. Because, if there is a new interlocutor, he may buy time and the talks might have to start from scratch. So I think it’s a positive decision to let him continue as interlocutor,” he said.

Notably, the peace talks with various groups have not happened recently and may resume after Ravi takes charge.

Hope is what the Naga people are clinging on, especially at a time when the elusive Naga framework agreement signed between NSCN(IM) general secretary Th Muivah and Modi in 2015 has not yielded any conclusive results.

With Ravi’s appointment as governor, the Naga issue gains more prominence as the special status accorded to Nagaland under Article 371(A) of the Constitution gives the governor of Nagaland more power.

The NSCN(IM) has already said that the demand for complete sovereignty has evolved to one of “shared sovereignty” over the years, and their hopes now hinge on how Ravi negotiates a final peace deal that fulfils the aspirations of the Naga people.

According to government sources, what turned out to be a feather in Ravi’s cap was how he carried forward the peace talks with NSCN(IM) without a break, while arranging for a fresh ceasefire with one of the factions of NSCN(K). He also roped in breakaway NSCN(KN) and the civil society into talks, and yet continued to engage NSCN(IM), which indicated his negotiating abilities.

Ravi’s appointment, however, has created ripples in the bureaucracy and security establishment, as many were taken by surprise. Ravi’s critics are sceptical and equally surprised.

“There has been no forward movement in negotiating a final settlement. The basic demands of the Naga people have not been addressed still. The government must realise that they cannot delay it too long, as the patience of the Naga people is running out. The new generation of the Naga insurgent groups is far more impatient. It all depends on the willingness of the government of India to find a permanent solution,” said an official handling the Naga issue.

“Will Ravi still remain the interlocutor? Will someone replace him? I think it's too early to comment on this issue,” said the official.

Meanwhile, the ministry of home affairs is yet to officially react to the development and clarify Ravi’s role as interlocutor for the Naga peace talks, and the new charge as governor assigned by the prime minister's office.