One Body, One Nation 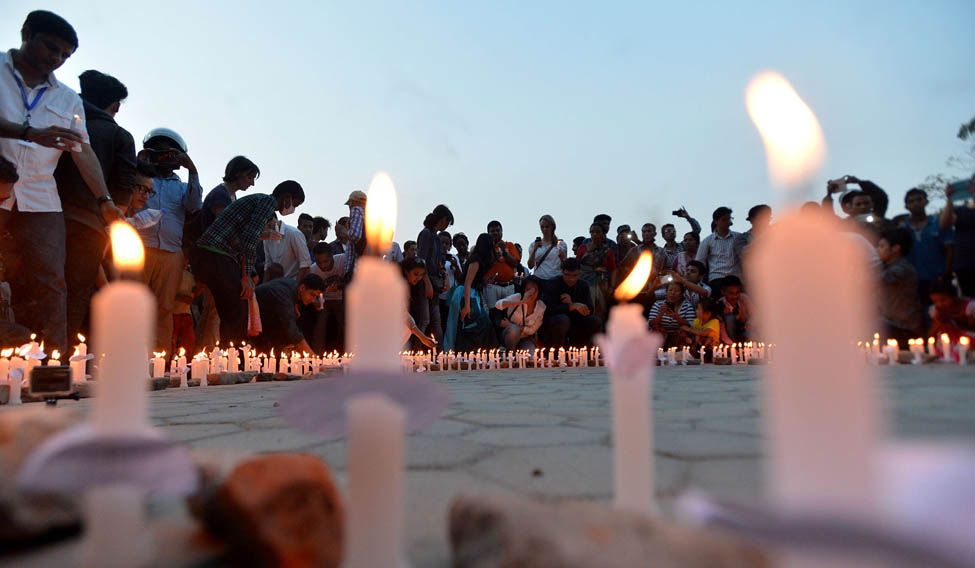 The land of Nepal, home to about ten of the world's highest mountain peaks, was established by yogis and mystics as a living, tantric body. Energy centres were created in such a way that the very geography of the nation was made to work like the living body, the whole nation would in a certain sense operate as one being. To be receptive to this dimension, the psychology of the nation was geared toward spiritual liberation.

Having visited this land every year for the past twelve years, it holds an intimate place in my heart. This present calamity of being struck by two earthquakes in a span of less than three weeks, is devastating. Not only is the loss of lives truly heartbreaking, it has also wreaked havoc on places of tremendous historicity and disturbed the science with which they were built.

Large parts of Bhaktapur, a beautiful, ancient city, have been reduced to rubble. “Bhaktapur” means a city of devotees or a city of devotion. It was created in such a way that it will not let you forget about the presence of the divine even for a single moment. Anywhere you looked, every small utility was made like a temple. Every step that you take on the streets, you could see a tremendous sense of aesthetics. Now this living city which has been occupied by people for 1,100 years without a break, has borne the wrath of this natural calamity. It very much deserves to be restored, heritage cities such as Bhaktapur are irreplaceable. I hope international agencies will take up restoration of this marvelous manifestation of Nepali aesthetics and ingenuity.

India connects to Nepal in its essence. Nepal has always been part of Bharatvarsh till political borders were drawn inconsiderate of cultural bonds and their significance. It is the only ‘Hindu’ Nation on the planet, in the sense, its culture is not based on belief, but in seeking liberation or Mukti. It is also the only nation which has been identified with this fact officially today. Even now, 98% of the population in Nepal goes to the temple in pursuit of mukti, which is largely being lost in India, the very genesis of this culture, where invasions and ignorance have led to very different kinds of aspirations taking us to temples. The beauty of Nepal is that they continued with the same spirit offered to them by their kings who sponsored these great adventures of turning their whole kingdom into a spiritual body. It was made in such a way that whether you were a man, woman, child, animal, bird, worm – nobody escaped the spiritual process. This was not exclusive to just those who closed their eyes and sat still. It was a gesture of the highest compassion that everybody benefited from it.

It is wonderful to see the Prime Minister has responded to the Nepali need with such alacrity. It is also very heartening to see how our army is helping with the rescue operations, and our government is rebuilding the electric supply. I urge everyone to recognise and respond to this calamity with compassion. My deepest condolences and blessings to Nepal and its people. Over the generations, the people of Nepal have been known for their courage and resilience. May they recover and prosper and operate as they have always done, as One body.

Your form could not be submitted.
This browser settings will not support to add bookmarks programmatically. Please press Ctrl+D or change settings to bookmark this page.
Topics : #Mystic Eye | #opinion