Democracy and the spiritual thread - I

Nations are made on the basis of race, religion, language or ethnicity. India is a colorful combination of all these things and more. Sameness has been the formula in the making of nations, and yet, India stands in total defiance of this mediocrity. We are an absolute amalgamation of a very complex mix of all these things, but still we are a nation. Probably the oldest nation on the planet—if you look back 8,000-10,000 years, when sometimes we were over two hundred political entities, we were still considered as one nation by those within the subcontinent and also from those outside. It was always known as Bharat, or sometimes as Hindustan. When we said ‘Hindustan’, it predated all religion. We were not talking of a particular type of people but of a geographical identity—the land between the Himalayas and the Indu Sagar. Every hundred kilometers, we looked different, spoke a different language, dressed differently and even cooked differently. And so it is today, too.

It is important to understand because this is unique only to India. Everywhere else, people come together because they are tied by a common belief, religious or otherwise. But India has always been identified as a land of seekers not believers. You become a seeker only when you realise you don’t know a damn thing about life. And that is how people live here—as seekers of truth, seekers of liberation. This is one nation on the planet where most of its population does not hold god or heaven as the highest goal. Mukti or liberation, continues to be our ultimate goal.

This is a wrong concept that everyone should have a common belief to be together. People believing in one god or one ideology have been fighting everywhere in the world. In fact, when there is no belief system, when you have no set of concretised ideas, when life is your mission and your teacher, seeking comes naturally. Then you're always looking to learn, always willing to learn, and always seeking your way through life. 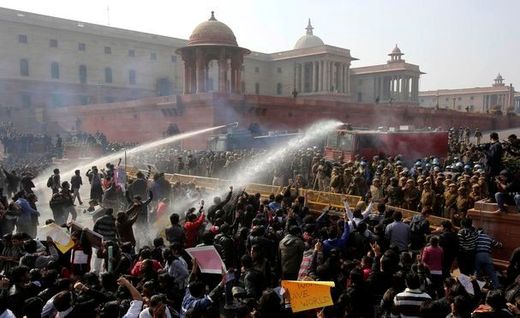 This milieu of things sets the right kind of atmosphere for a democratic process also, because a democratic process cannot happen in any reasonable sense if people are already predetermined which party they will vote for, which caste they will vote for, which creed or which race they’re going to vote for. When the opportunity comes in front of us, if each one of us is willing to think from our own intelligence and arrive at a decision of vote, then democracy makes sense. Otherwise, it is just feudalism of a different kind. So real democracy can only happen when people do not have strong set of beliefs about anything; they are willing to take a fresh look at everything.

The word for democracy in Tamil language is 'jananayakam'. It means people are the leaders. It is not that we are electing a leader. Well, one billion people can’t go and sit in the Parliament so we are sending five-hundred-and-forty people, but people are the leaders. They are the ones who must make decisions. But we think, once we cast a vote, our job is done. If people have to be leaders it is very important the necessary education is imparted right from the school level. Political class is becoming feudalistic in so many ways simply because there is no active relationship with the people except for that one voting day. And that one day will turn into a farce if there is no active relationship. I believe this should not be optional; this should be mandatory—that elected candidates have to come back to the people and engage with them.

Another idea that must be taken out of people’s minds entirely, is that if you want to become a leader, all you have to do is gather hundred people and block a road or a railway or something else. Agitation was the right way during the British era but no more. This is nothing but a pre-independence hangover and it has to go if democratic process has to happen effectively today.