The Forgotten Essence of India

Today, power is the only thing that is respected. This is only because we have not created a world where gentleness is respected. But is this power, this craze to accumulate wealth, making us happy? We are now at the peak of world attention. It is important to see how we present ourselves to the world and what we have to offer to the world.

We have forgotten that the essence of Indian culture has always been about human liberation. No other culture has looked at a human being with so much depth and understanding and created methods to evolve a person into his ultimate nature. To put it bluntly, we have technologies to an enlightened being. Western societies talk of political, social and physical liberation, but we have always understood liberation as the core value of who we are, the ultimate liberation. We need to understand that this Indian spiritual ethos is not about belief systems. It is about systematic practices that were so intellectually and magnificently presented over thousands of years that they sharpened the mind and body in a certain way. That is why the country is so effortlessly going ahead in the information and technology age. India as a nation is very unique. It has an ethos and a quality that you can't find anywhere else. There has been a certain dimension to this mass of people which we right now refer to as India or Bharat, a certain sense of awareness and wisdom which is very hard to find anywhere else. People always looked east when they thought of inner wellbeing. Why shouldn't India aspire to make every nation meditative? 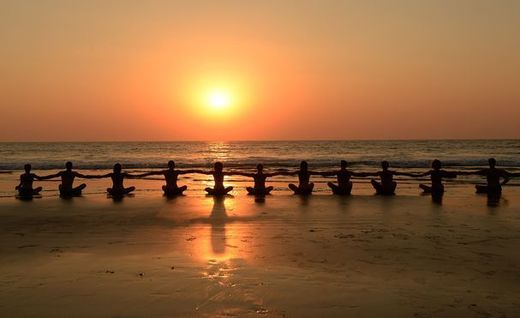 That is why I say yoga. When I talk about yoga, I am not referring to various postures that people seem to want to achieve. I'm talking about yoga as a method, a whole technology, which leads you on to a sense of inclusion; to experience everything and everyone as a part of yourself, which ultimately brings absolute clear perception of the realities in which you exist. Modern science looks at everything as a conquest. There are two ways of making somebody or something yours—one is by conquest, another is by inclusiveness. Inclusiveness is the way of yoga; conquest unfortunately has become the way of modern science. We have a wrong sense of what is achievement in life. Is conquest at the cost of harming someone an achievement, or is inclusion by making someone fall in love with you an achievement? Our juvenile ideas of achievement need to be altered, particularly in the minds of children. Though forceful extraction is more useful, it is crude. It is in inclusion and gentleness where the very process of life thrives. So our aspiration should be to become a nation operating from clarity, creating wellbeing for itself and as far as possible, wellbeing for everybody in the world. Unfortunately, because of over two centuries of extreme poverty, our spiritual ethos has gotten twisted out of shape. It becomes the responsibility of every generation to put it back into shape, as the effective tool for one’s liberation while demonstrating its immense possibility to the world.

So a time has come for this culture to manifest and reinstate itself once again. The distortion it has gone through due to invasion and poverty has not destroyed the spiritual thread even if it has made us hungry for power and wealth. As a nation we must show the world by example that when we talk of freedom, we mean ultimate liberation: freedom from everything, freedom from prejudice, freedom from fear, freedom from death. So, establishing that focus is most important today because every human being tends to get encumbered hugely by external factors. Fear encumbers human intelligence in so many ways. But once a person has the ultimate goal of liberation, nothing else is more important for him. He goes about his life with a profound understanding, with a certain sense of responsibility. We should become a counter model for the dog eat dog type of world situations. We should establish a society that is respected not because of its aggression or wealth but because of its wisdom of life. And till we learn to respect gentleness, the world will never know evolved situations.