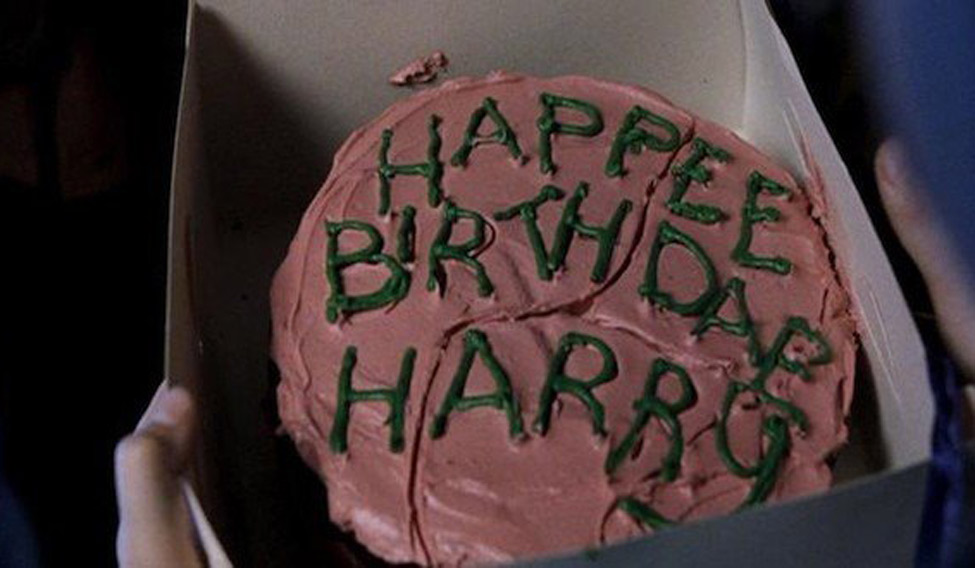 “Might’ve sat on it at some point,” said the gentle giant as he handed Harry the cake he had baked

From the frugal meals at the Dursleys to the grand feasts at Hogwarts, Harry Potter has had a sumptuous journey as far as food was concerned in the seven-book series. As a reader (by the night and foodie throughout the day), certain delicacies in the wizarding world have tickled my taste buds, and some, well, not so. Here's a look at some of the well-known ones:

Food was scarce at the Dursleys, for Harry Potter, that is. They never bothered to celebrate his birthday and get him a cake. He was given leftovers and sometimes, went to bed hungry. But the wizarding world, in contrast, was heaven. So, when Harry received his first gift from the wizarding world it was certainly a turning point. “Might’ve sat on it at some point,” said the gentle giant as he handed Harry the cake he had baked. We do not know how it tasted, but are happy and relieved to know that the world of magic has found him and that there are people who care for him.

When Harry and Ron meet for the first time on the Hogwarts Express, there is an instant camaraderie, thanks to the food trolley. Till then, Harry never had anything to share, or anyone to share it with. Ron gives Harry his first lessons on the wizarding world as they gobble Bertie Botts Every Flavour Beans, Chocolate Frogs, Pumpkin Pasties, Cauldron Cakes and countless other sweets. Mrs Weasley's Corned Beef Sandwiches, packed for Ron, are forgotten.

Start-of-term feast. Christmas feast. Feasts at Hogwarts are an elaborate and mouth-watering affair. Though Harry misses it most of the time, he has more than made it up every time he has been at the table. The dishes prepared by house-elves magically appear on the plates laid out on each house table. The food is worthy of a heart attack—roast beef, roast chicken, pork chops, lamb chops, sausages, bacon, steak, roast potatoes, mashed potatoes, chips, steak and kidney pie... the list is unending. Same goes for breakfast, lunch and dinner. I wonder if Madam Pomfrey treats the students and teachers for high cholesterol and diabetes! Also, don't wizards drink water? There is plenty of Pumpkin Juice going around but water is hardly mentioned, except once, when Harry wakes up at night and drinks water.

Other than Hogwarts, the other place that feels like home for Harry, is the Burrow. During the first year, when Ron alerts his mother that Harry wasn't expecting any presents for Christmas, she knits an emerald green jumper for him and sends it along with home-made fudge. Similarly, whenever Harry is staying over, Mrs Weasley fusses over him, feeding him heavily buttered toasts, bacon and other goodies. But the best was the giant golden snitch cake baked for Harry's 17th birthday. Mrs Weasley's food is full of love. She loves Harry just like her sons and considers him part of her family. Well, eventually he becomes family!

It is, arguably, Harry’s favourite pudding. When in presence of Amortentia, the love potion, Harry is reminded of "treacle tart, the woody smell of a broomstick handle, and something flowery he thought he might have smelled at the Burrow". It is often found at the feasts and is made of golden syrup, fresh breadcrumbs and lemon juice.

The way Rowling sets up food in the story, not only connects us, the readers, with our hero, but also supports the cultural identity of the entire series. She uses real and magical dishes to set the boundaries of the world Harry lives in. Certain dishes mark turning points in the story, or are part of a bigger plot in the narrative. So, food in Harry Potter is not only abundant, but also relevant, not merely for its nutritive value, but as an important part of its identity.

Food in the wizarding world is colourful and fun, when compared to that found in the world of muggles. While muggles eat sherbet lemons (which, interestingly, Dumbledore loves), wizards try Bertie Blotts Every Flavour Beans. While wizards enjoy jumping chocolate frogs, we are left with boring chocolates.

Rowling consciously serves us traditional British dishes during lunch, dinner, breakfast and feast. Knickerbocker glories sound magical to those who are not familiar with it. But they are, in fact, an ice cream sundae variety available all around England. Treacle Tarts is a traditional English dessert. When the books travelled across the ocean to the US, certain changes were made—chips became fries and jacket potato was changed to baked potato.