Rupert Grint said Watson and Radcliffe were "like family" 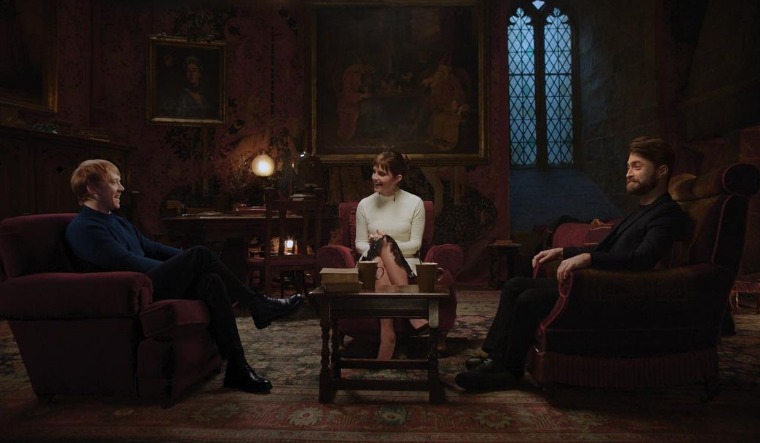 Rupert Grint, Emma Watson and Daniel Radcliffe in a still from the upcoming HBO Max special 'Return to Hogwarts' | Instagram

Looking back at the decade they filmed the "Harry Potter" movies, actors Daniel Radcliffe, Rupert Grint and Emma Watson, who got back together with the rest of the cast for a 20th anniversary reunion special, said the films will forever remain an integral part of their life.

Radcliffe, Watson and Grint were 11, 10 and 11, when they did their first press conference in 2000 for Harry Potter and the Philosopher's Stone.

Recalling the emotional last day of shooting the final movie Harry Potter and the Deathly Hallows – Part 2 as Harry Potter, Hermione Granger and Ronald Weasley, the actors said there was sadness but also gratitude to have been a part of a series that impacted so many lives globally.

"On that last day, I just lost it," Radcliffe, who played Potter, said in the reunion episode, which was filmed on the massive set that Warner Bros had built for the movies, adapted from J K Rowling's best-selling book series.

Sitting in the Gryffindor Common Room, the three relived their memories of growing up during the course of filming the movie series.

Watson said, "I remember all of us just holding each other. All three of us were like utterly devastated. I think it was the first time we allowed ourselves to even process or realise 'we've done it', 'we've made it through.'"

The actor, who went on to establish a successful career in Hollywood later, said she was proud to have been a part of the series. "There's something about 'Harry Potter' that makes life richer, like when things get really dark and times are really hard, stories give us places we can go, where we can rest, feel held," she said.

Grint said the film series is so "ingrained" in him that "I measure my life with these movies."

Radcliffe, who was discovered to play Potter after "Philosopher's Stone" director Chris Columbus saw him in the BBC One television film "David Copperfield" in 1999, said every part of his life is connected to "Potter".

"I don't think I fully appreciated the reach that these films had when we were in them... These are the only films my dad and I watched together, like we can't talk about anything else... We watch 'Harry Potter' together and that has been our thing," the actor recalled.

Grint said it is amazing that the stories are finding new mediums be it the stage show Harry Potter and the Cursed Child or the Fantastic Beast franchise.

"It's just kind of living forever. And it's amazing to see that," he said. Actor Tom Felton, who played Harry Potter's rival Draco Malfoy in the series, spoke about the friendship that the young cast shared behind the scenes.

The actor recalled how they had no inkling that they were surrounded by the acting royalty of Britain in artists such as Robbie Coltrane, Warwick Davis, Richard Griffiths, Richard Harris, Alan Rickman, Fiona Shaw, Maggie Smith, Julie Walters, Kenneth Branagh and Ralph Fiennes.

"Most of the fans that come up and say hello to me now weren't even born when we made the films, so it quickly makes you feel slightly older and very grateful that it has been passed down to other generations," Felton said. Coltrane, who played the popular character of Rubeus Hagrid in the movie series, said his children grew up during the course of filming.

"So you could be watching it in 50 years time, easy. I won't be there sadly, but Hagrid will." His favourite scenes to look back even now are the ones he films with Watson, Radcliffe and Grint.

Grint said Watson and Radcliffe were "like family". "We're just so intrinsically linked. They are very important people to me."

Fans can watch The Harry Potter reunion special on HBO Max on January 1.