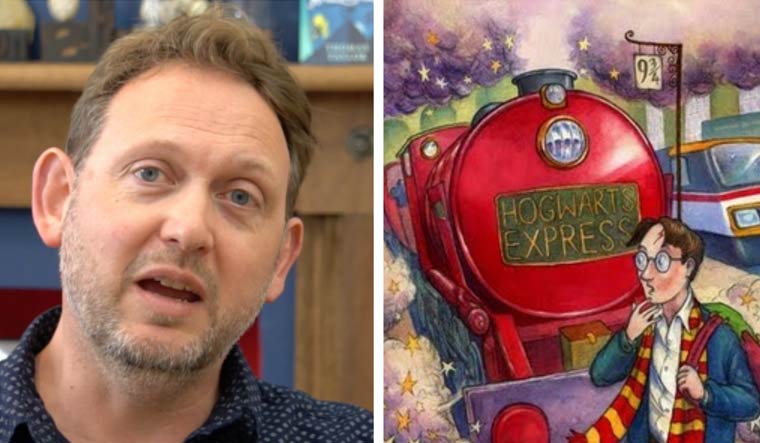 Thomas Taylor; the cover of Harry Potter and the Philosopher's Stone

The year was 1996. Thomas Taylor was only 23 and fresh out of art school. It was probably the spontaneity of the age which made him walk into the London office of Bloomsbury Publishers and drop off some sketches of dragons.

A week later, he got a call from Barry Cunningham, the publisher, with an offer to do the cover for a book by a certain J.K. Rowling. And the book? Harry Potter and the Philosopher's Stone, which completes 25 years today. A quarter century since history was made in the world of fiction writing.

A red steam train with HOGWARTS EXPRESS written on the front on platform 9 3/4, and purple smoke billowing out of it. A bespectacled boy with a lightning scar on his forehead taking it all in wonder. Taylor's illustration on the cover would go on to become one of the most iconic images in the world. Cunnigham had told Taylor that he wanted to show Harry Potter boarding the Hogwarts Express, on the cover. What sounded simple, wasn't so when Taylor started sketching.

“Naturally I was quite excited,” Taylor wrote later. “My first illustration job – Yay! I expect I bought some new pens to celebrate, and maybe a moderately-priced bottle of Belgian beer. There was an incomplete manuscript to read, roughs to do, and then the painting. The final image — a pencil sketch, painted with concentrated watercolour and then outlined with a black Karisma pencil — took two days, and all things considered I was quite pleased with it. I think I delivered it by hand.”

Interestingly, the amazement around the world wasn't restricted to the boy phenomenon on the front cover. An unknown wizard which Taylor painted on the back cover intrigued readers. He wore a wizard's hat, pin-striped trousers, had a pipe in his mouth, a book tucked in his arms and a bulge in his right pocket. Readers, reportedly, demanded to know who it was. Taylor knew the answer – the wizard was modelled on his father, who used to dress flamboyantly! But finally, upon Bloomsbury's request, it was replaced with an illustration of Albus Dumbledore in later editions.

What's baffling, however, is that Taylor didn't buy the book when it was first printed, as the publishers were supposed to send him a signed one! He could have made a fortune, if he had – a first edition was, reportedly, recently sold for $471,000. Despite designing the cover of a book with phenomenal sales, Taylor said that he did not make a lot of money, as it was a one-off payment without any royalties. He continued to work in Heffer’s Children’s Bookshop in Cambridge.

Even more surprising was that fact that Taylor wasn't really a Potterhead, though he loved the books. The overnight success did more harm to his creative career than good, he admitted later.

The Harry Potter and the Philosopher's Stone one was the only Harry Potter cover he made, as Bloomsbury turned to the more experienced illustrator Cliff Wright once the books took off.

Taylor has moved on, with a successful fantasy fiction book series for children called The Legends of Eerie-on-Sea. But, guess what? He did not design the covers for the four books!