While Modi and Hasina made a great beginning, their goals might have sown the seeds of tension, especially in the fields of water and energy

The house at 32, Dhanmondi in Dhaka, is a tribute to the tenacity of Bangladesh Prime Minister Sheikh Hasina. Forty years ago, her father Sheikh Mujibur Rahman, who was the president of Bangladesh, was gunned down here, along with her mother, siblings and several relatives and supporters. Over the past four decades, Hasina has built for herself an ideological family, with a formidable team of advisers. Gowhar Rizvi, who is her chief foreign affairs adviser, belongs to this group. His rise shows how Hasina has been leaning on first-rate advisers and not depending on ministers to streamline Bangladesh's ties with India.

Early in the morning on June 6, Rizvi was at Dhaka's Hazrat Shahjalal international airport to ensure that the welcome for Indian Prime Minister Narendra Modi, who was arriving on a two-day visit, went without a hitch. When asked about his personal role in negotiating the Land Boundary Agreement (LBA) and several other key projects with India, Rizvi said the focus should be on the teamwork displayed by the negotiating teams of both countries, which helped Hasina and Modi conclude 22 agreements during the visit. The high point of the visit was the exchange of the instruments of ratification of the LBA. Hasina’s media adviser Iqbal Shobhan Choudhury said the LBA had forced the cynics to revisit their traditional anti-India stand. “The ratification of the LBA in the Indian Parliament shows that India itself has adopted a different approach to its south Asian neighbours. The prime minister of Bangladesh planned her moves by keeping the declared policy of 'south Asia first' by the Indian PM,” he said.

Before the instruments of ratification were exchanged, Modi, Hasina and West Bengal Chief Minister Mamata Banerjee flagged off two buses, one linking Kolkata with Agartala via Dhaka and the other connecting Dhaka with Shillong and Guwahati.

On the maritime front, Bangladesh has allowed the use of the Chittagong and Mongla ports for trade with India. "The increased use of Mongla and Chittagong will reduce pressure on the land customs check posts, which see heavy trade between the two sides,” said S. Jaishankar, foreign secretary of India.

Jaishankar said India would not play with the “Himalayan component” of the rivers that flowed from India to Bangladesh. This was music to the ears of the Bangladeshi leadership, which had been disappointed with the lack of progress on the Teesta river water sharing agreement. The two sides also managed to reach an understanding on joint border management to stop fake currency circulation, drug running, arms smuggling and human trafficking.

Modi's successful visit, however, exposed some of the internal political issues of Bangladesh. When Modi met former prime minister Khaleda Zia, who headed the Bangladesh Nationalist Party, she told him that Bangladesh no longer had any political democracy. Even as the meeting was on, Hasina's information minister Hasanul Haq Inu accused Zia of supporting terrorism and fundamentalism.

Zia's critics said, by boycotting the January 2014 elections, she ceded the right to challenge Hasina, who changed the language of politics in Bangladesh by launching Vision 2021, a plan focused on making Bangladesh a middle income country by the next decade. BJP spokesperson M.J. Akbar, who has been lobbying in favour of better India-Bangladesh ties, said there was the growing realisation in Bangladesh that a “class confrontation” was unfolding among the urban Bengali intellectuals, the industrial and the political class, and the rural farming people. “Every political party in Bangladesh, including the Islamists, understand that the class confrontation will have to be controlled somehow. Otherwise, the consequence of this confrontation might trigger a big crisis,” he said. It is this realisation that forced Zia to seek an appointment with Modi.

Commentators said the opposition was running out of agenda, but some warned that Hasina was showing signs of political authoritarianism, especially regarding the war crimes of 1971. Tajul Islam, lawyer for the Jamaat-e-Islami leaders, said the cases against his clients smacked of political vindictiveness. Interestingly, Hasina recently made the biggest U-turn of her career by appointing former dictator General Mohammad Ershad her special envoy with the rank of a cabinet minister. In 1990, Ershad was removed from the post of president following a massive protest movement led by Hasina. 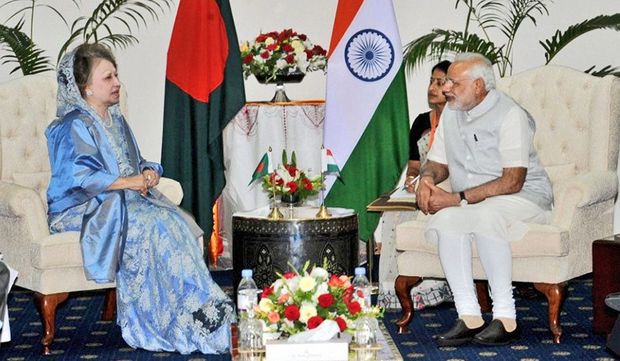 For keeping her promises to Modi, Hasina needs a huge amount of goodwill. A major challenge will be in the field of energy cooperation with India. Mohammed Tamim, a former adviser of petroleum affairs to the government of Bangladesh, said several issues remained unaddressed in energy deals. First on this list is a plan to bring power from the northeast to Muzaffarnagar in Uttar Pradesh via Bangladesh. Tamim said Bangladesh had demanded a share of the energy pie from the northeast as part of the transit plan, but it was not mentioned in the joint statement. “We have demanded approximately 1,500 to 2,000MW energy. This deal does not make sense unless Bangladesh gets a share of the energy to be routed across its territory and with help from its infrastructure,” he said. Tamim was also critical of the fact that the joint statement was silent on India encouraging Bhutan and Nepal to export energy to meet Hasina’s target of 24,000MW by 2021. He said while Hasina and Modi made a great beginning, their mutually agreed upon goals might have sown the seeds of future tension, especially in the fields of water and energy sharing.

Hasina also faces the threat of terrorism and insurgency. She won praise from Modi for dismantling terrorist camps in Bangladesh and for seizing arms buried in forests near the Indo-Bangla border. But such relentless crackdown has increased the threat of an attack against Hasina herself. The murder of liberal bloggers, the rise of Al Qaeda in Bangladesh and the constant attacks on secularists by the Islami Chhatra Shibir, the student wing of the Jamaat, have increased the threat perception against Hasina.

Another crisis facing Hasina is the illegal immigration of young Bangladeshis, who often fall victims to traffickers. Her hurriedly planned recent trip to the UAE was reportedly in response to the Emirates' ban on visas to Bangladeshis following large-scale violation of visa norms. Saudi Arabia has suspended Umrah visas (a pilgrimage to Mecca which can be undertaken at any time of the year) for Bangladeshis. Modi has pledged to work with Dhaka in stopping the flow of illegal immigrants from Bangladesh, but there is very little chance of the issue getting resolved in the near future.

Yet, on all possible fronts, the Hasina government is moving fast to capitalise on the advantages of Modi's successful visit. A day after seeing off Modi, Hasina sat down with her team of ministers and advisers and cleared plans for the June 15 meeting of the transport ministers of Bangladesh, Bhutan, India and Nepal for the BBIN project, a cross-border transport project linking the four countries. “Hindrance-free movement of motor vehicles between Nepal, Bhutan, Bangladesh and India across their international borders will be a revolutionary development in the history of south Asia," said Inu. "It will be an example before the world."

Milestones
Some of the major agreements signed during Modi's visit
* Exchange of instruments of ratification of the Land Boundary Agreement
* Bilateral trade agreement
* Agreement on Dhaka-Shillong-Guwahati and Kolkata-Dhaka-Agartala bus services
* MoUs for prevention of human trafficking, smuggling and circulation of fake currency
* MoU for extending a line of credit of $2 billion to Bangladesh
* MoU for maritime cooperation in the Bay of Bengal and the Indian Ocean
* MoU for use of Chittagong and Mongla ports
* MoU for an Indian Economic Zone

Your form could not be submitted.
This browser settings will not support to add bookmarks programmatically. Please press Ctrl+D or change settings to bookmark this page.
Topics : #Narendra Modi | #Bangladesh