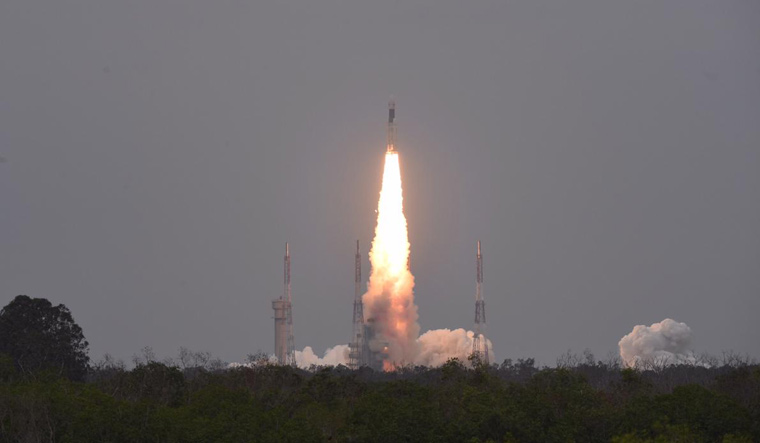 Aiming to take a "billion dreams to the moon", India on Monday successfully launched its second lunar mission Chandrayaan-2 on-board its powerful rocket GSLV MkIII M1 from the spaceport here to explore the unchartered south pole of the celestial body by landing a rover.

The geosynchronous satellite launch vehicle lifted-off from the Satish Dhawan Space Centre here into cloudy skies at 2.43 pm and successfully placed the 3,850-kg Chandrayaan-2 into the earth orbit about 16 minutes later.

The mission's success brought huge relief for ISRO scientists after the July 15 launch was called off just about an hour left following a technical glitch in the rocket.

The Rs 978 crore mission, that will mark a giant leap in India's space research and make it only the fourth country to have landed a rover on Moon, was rescheduled to Monday after scientists corrected the technical glitch in the three-stage rocket.

In a textbook launch, the towering GSLV-MkIII-M1 lifted off majestically from the second launchpad at the Satish Dhawan Space Centre here, over 100 km from Chennai, as the Indian Space Research Organisation scientists broke into jubilation.

"Chandrayaan-2 is unique because it will explore and perform studies on the south pole region of lunar terrain which is not explored and sampled by any past mission. This mission will offer new knowledge about the moon," Prime Minister Narendra Modi said in a congratulatory tweet.

Scientists led by ISRO chief K. Sivan watched the launch sequence in rapt attention and broke into applause after every key stage of the rockets flight which progressed precisely as programmed.

A visibly relieved Sivan, who announced the success of the mission, said, "It is the beginning of a historical journey of India towards the moon".

"We bounced back in flying colours after the earlier technical snag," he said about the glitch that made the space agency reschedule the Chandrayaan-2 launch from July 15 to Monday.

There will be 15 "very crucial manoeuvres" in the next one and half months before the satellite is brought around the moon, he said in his post-launch address from mission control centre.

"After that the D-Day will come and on that day we are going to experience 15 minutes of terror, to ensure the landing is safely near the South Pole," he added.

Read: How will Chandrayaan 2 launch work? A sneak peek

ISRO had last week called off the launch with just 56 minutes of the countdown left, a decision that was later hailed by space experts as a prudent measure not to risk the mission.

After taking remedial action based on an analysis carried out by a team set up to look into the snag, the space agency announced the rescheduled lift-off four days ago, indicating the confidence of the scientists which stood vindicated with the successful launch.

"Chandrayaan 2 is ready to take a billion dreams to the moon now stronger than ever before! Join us for the launch on Monday 22 July, 2019 at 2:43 PM IST," ISRO had tweeted on July 18 while announcing the rescheduled launch.

Chandrayaan-2 comes 11 years after ISRO's successful first lunar mission Chandrayaan-1 which scripted history by making more than 3,400 orbits around the Moon and was operational for 312 days till August 29, 2009.

Chandrayaan-2, a three-component spacecraft comprising an orbiter, lander and a rover, will undergo 15 crucial manoeuvres before landing on the Moon, expected by the first week of September.

Scientists would make a soft landing of the lander in the South Pole region of the moon where no country has gone so far.

Billed as the most complex and prestigious mission undertaken by ISRO since its inception, Chandrayaan-2 will make India the fourth country to soft land a rover on the lunar surface after Russia, the United States and China.

From here onwards, the mission will undergo a series of manoeuvres by scientists to carry out different phases of the mission over the next 48 days.

Subsequent to the rescheduling of the launch, the space agency has tweaked the orbital phases, increasing Earth-bound phase to 23 days as against 17 days planned originally.

At the end of the Earth-bound phase, the orbit of the spacecraft will be finally raised to over 1.05 lakh km before nudging it into the Lunar Transfer Trajectory taking it to the proximity of Moon in the next two days.

Then gradually over the next few days it will be brought to 100 X 100 km circular orbit when the lander will separate and after another few days of orbiting it will make a soft landing at a chosen place on the Lunar surface.

The soft landing of the lander—Vikram carrying rover Pragyan, one of the toughest phases of the mission and described by the ISRO chief as "15 minutes of terror (filled moments), would be attempted between September 6-8.

"Chandrayaan-2 is the next leap in technology as we attempt to soft land close to South Pole of Moon. The soft landing is extremely complex and we will experience approximately 15 minutes of terror," Sivan had said.

The mission, which carries a total of 13 payloads, including three from the Europe, two from the US and one Bulgaria, seeks to improve understanding of the moon which could lead to discoveries that will benefit India and humanity as a whole.

A Laser Retroreflector Array (LRA) of US space agency NASA is among the payloads and is aimed at understanding dynamics of Earths moon system and deriving clues on Lunar interior.

According to ISRO, the lunar South Pole is an interesting surface area which remains in shadow than North Pole.

There is a possibility of the presence of water in permanently shadowed areas around it, the agency said, adding craters in the South Pole region have cold traps and contain fossil record of the early solar system.

The lander Vikram, named after father of Indian space research programme Dr Vikram A Sarabhai, carrying the rover Pragyan, will be landed in a high plain between two craters at a latitude of about 70 degrees South of the moon.

Then the 27-kg Pragyan meaning wisdom in Sanskrit and a six-wheeled robotic vehicle, will set out on its job of collecting information on lunar surface.

A safe site free of hazards for landing would be decided based on pictures sent back by the camera onboard the lander and after touchdown the rover will carry out experiments for 14 Earth days, equals one Lunar Day.

The launch was witnessed by nearly 5,000 people who were accommodated at a viewing gallery, located a few kms from the launchpad, thrown open to the public by the ISRO in May last.