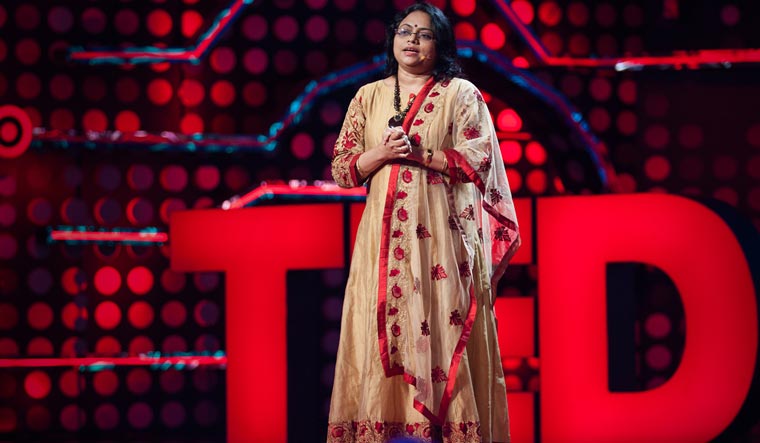 A simple girl from a small city who on stage transformed into this amazing confident woman, meant to conquer. This is how Ekta Viiveck Verma describes Ritu Karidhal, mission director for Chandrayaan-2, India's second lunar exploration mission.

Verma and Karidhal both spent their formative years in Lucknow. When they met in 2015 in Hyderabad, the Lucknow connect helped form an immediate bond. Verma is a core member of the organising team for TEDxHyderabad at which Karidhal was a speaker.

In that talk, which earned her a standing ovation, Karidhal subtly addressed the many criticisms that investment in space research draws. She spoke of the “cross-pollination between fields” where innovations in one field stimulate revolutionary changes in another, perhaps completely unrelated, field. The example she chose effortlessly straddled space and the everyday and between genders. She spoke of an algorithm developed for a space programme that when used with X-Ray images helps in better detection of the early stages of breast cancer.

Such a divergence also marked Karidhal's years at the St Anjani’s Public School in Lucknow’s Rajajipuram area. The school's present manager, Taru Saxena, who was her junior at St Anjani's, remembers that Karidhal discharged her duties as a school monitor as effortlessly as she tackled science. “She would consistently win the district science championship. Her fire, zeal and inquisitiveness were apparent even then,” says Saxena.

The other memory Saxena has of Karidhal is of her emotional nature. “She was very attached to the science teachers and cried when she had to leave school in 1987,” she says. The change was prompted by the fact that the school then had classes only till class eight.

At Karidhal's next school, Navyug Kanya Vidyalaya, where she studied from classes nine to 12, Indu Agarwal was the mathematics teacher. "She was a good student, but no one could have predicted the heights she would conquer. Despite studying in an ordinary government school, through sheer hard work, she rose spectacularly. She is an example of how far honest effort can get you,” Agarwal told THE WEEK.

Karidhal, like many top scientists at the Indian Space Research Organisation, has not needed the tag of affiliation to a supposed premier institution to prove her worth—a fact that many of those who knew her in Lucknow say is her biggest achievement.

Karidhal's next institution was the Mahila Vidyalaya PG College from where she did her BSc degree, before moving on to Lucknow University (LU) for a master's degree in science.

Poonam Jayant Singh, now a scientist at the National Bureau of Fish Genetic Resources at Lucknow, was Karidhal's classmate in school and during BSc. "She was a very simple, hardworking girl. Chemistry was a common subject and she once took my notes. Those were not the days of mobile phones, so we just met when we would bump into each other,” says Singh.

“She should give us a party to the moon. It feels so good to see her leading such an important mission,” says Singh who has lost touch with Karidhal since.

Unassuming and hardworking are two adjectives one hears repeatedly from those who knew Karidhal in her Lucknow years.

Manisha Gupta, her physics teacher at LU, remembers a moment of crisis in Karidhal's life when she was selected by ISRO while doing her first year of PhD. “She was very keen on research and so [was] in a dilemma when selected by ISRO. I told her that she must not let go of the opportunity,” says Gupta.

During the six months that Karidhal put into her research at LU, Karidhal also had a part-time lecturer position. “In research, generally six months are just enough to know your subject well. But she was so sincere and hardworking that in that time she had done enough work to publish a paper,” says Gupta.

Years later, when the two met in Bangalore, Karidhal, whose star was on the rise, remained as unassuming as Gupta’s initial memories of her.

Ekta Viiveck Verma says that Karidhal appeared somewhat nervous while waiting for her talk at Hyderabad. “My job was to ensure that speakers were comfortable. To calm her, I began asking her questions about herself. As soon as I discovered she was from Lucknow, we had so much to chat about. Later in the evening, people couldn’t stop wondering why we were giggling so much!” Verma said.

The two have remained friends since. “She is a lovely, God-fearing, devoted mother and wife. As a friend, she is very easy to talk to and our friendship isn't based on calling each other every day,” says Verma.

As Karidhal prepares for one of the most important take-offs of her professional life, many of those who knew her in Lucknow will be applauding her journey to the moon.

The latest issue of THE WEEK, which has hit the stands, covers in detail preparations for the launch of Chandrayaan-2 and future plans of ISRO.