India's second moon mission, Chandrayaan-2, will be launched on July 15 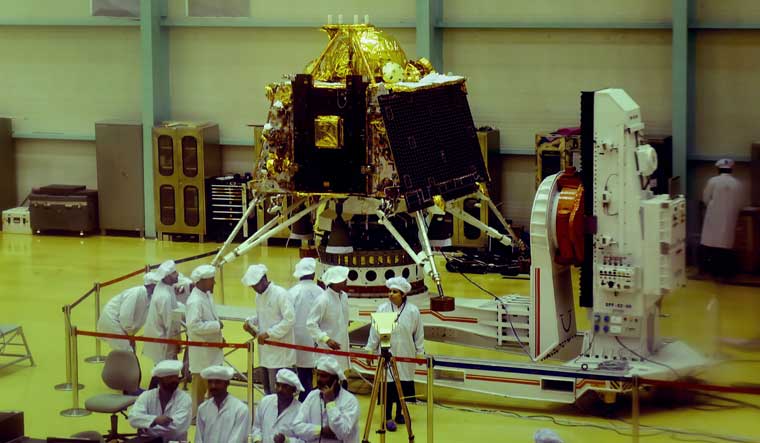 ISRO personnel work on the orbiter vehicle of Chandrayaan-2 at ISRO Satellite Integration and test establishment (ISITE), in Bengaluru | PTI

Indian Space Research Organisation on Wednesday announced that India's second moon mission, Chandrayaan-2, will be launched on July 15 at 2.51am from Satish Dhawan Space Centre at Sriharikota in Andhra Pradesh. ISRO chairman Dr K. Sivan termed the mission as one of the most challenging space mission the country has ever undertaken. All the required tests including the module and the system tests have been completed, and the spacecraft will be packed and transported from Bengaluru to Sriharikota in the next few days. Chandrayaan-2 mission will have an orbiter, lander and rover, and will carry 14 scientific payloads. The lander and the rover is expected to land on the moon on September 6 or 7.

“We have left no stone unturned and we are confident of a successful soft landing on the moon. The different manoeuvres have to be successfully completed before the lander and the rover lands on the south pole region of the moon. All these manoeuvres make the mission very challenging as ours will be the first spacecraft to land on the moon's south polar region and the last few minutes before its touchdown will be a new thing for ISRO, which we have never attempted before,” said Sivan. The total satellite cost of the mission is Rs 603 crore and the launch vehicle cost is Rs 375 crore. ISRO has also partnered with the industry and the academia for this mission.

Interestingly, the lander onboard Chandrayaan-2 has been named as Vikram after Dr Vikram Sarabhai and will use advanced propulsion systems to attempt India's first solo landing on the moon. The rover has been named as Pragyan. Chandrayaan-2 will be launched by the GSLV Mk-III launcher that weighs as much as 640 tonnes with the complete payload and is almost equivalent to 640 hatchback cars stacked on top of each other.

The spacecraft will undergo many different manoeuvres before reaching the moon on September 6 or 7. After the take-off, the first stage will involve the separation of Chandrayaan-2 integrated module from GSLV Mk-III followed by the completion of five liquid engine burns then followed by a Trans Lunar Injection. It will then enter into the moon's sphere of influence and would be inserted into a lunar orbit. This will again be followed with the separation of Vikram lander from the orbiter and the commencement of the powered descent phase. Finally, there will be initiation of terminal landing phases and the completion of soft landing. Once the soft landing is complete, the rover Pragyan will carry scientific experiments on the moon.

“The moon is around 384,400 kilometres from the earth surface. In case we undertake a straight journey, it will take around 5 days for a spacecraft to reach the moon at a single stretch. However, we will follow the most optimum way and will undertake different steps, and will raise the orbit of the spacecraft in a slow manner,” explained Sivan.

There are many reasons why ISRO is aiming a soft landing at the southern region of the moon. “There are not many craters on the southern part of the moon and it has a nearly flat surface which will pave the way for a smooth soft landing. Besides this, there is also good solar light available and this will be helpful to power the system,” remarked Sivan.

Both the lander and the rover will have a lifespan of one lunar day (14 earth days) whereas the orbiter will circle around the moon for a year. Chandrayaan-2 is also carrying a NASA payload which will be a small instrument to measure the distance between the lander and earth.