'Success of Chandrayaan-2 depends on accurate manoeuvres near moon' 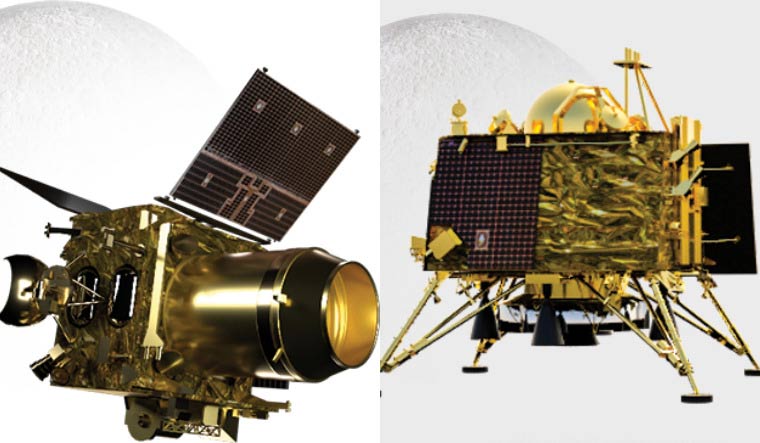 A collage of the Chandryaan's orbiter (left) and lander | ISRO

As Chandrayaan-2 gets ready for a second launch attempt at 2.43pm on July 22 from the Satish Dhawan Space Centre at Sriharikota, the mission will have to undertake accurate manoeuvres, especially during its later phase when it nears the moon's orbit before attempting a landing on the lunar surface.

There would be hardly any scope of error during this phase, as some space technology experts pointed out. Post the lift-off from Sriharikota on July 22, the GSLV will put the Chandrayaan-2 orbiter into a highly elliptical orbit from which the spacecraft will have to fire its on-board thrusters to get on course with the moon. This will involve multiple thrust burns where the propulsion systems will be turned off and on to adjust the trajectory of the spacecraft.

The main challenge will emerge when the spacecraft will approach the moon's orbit. “Once the spacecraft is approaching the moon, the propulsion system has to fire at the right time to be able to be captured around the lunar orbit. If it doesn’t, then either the craft can crash onto the moon or completely miss the moon and wander into outer space,” explained Narayan Prasad, co-founder and chief operations officer of Satsearch.

“Making the spacecraft reach the moon and to make it captured around the lunar orbit was demonstrated by Chandrayaan-1 and therefore it can be said that ISRO has this capability. The next phase is the lunar insertion. This is where the propulsion system fires the spacecraft into the lunar surface. There are also on-board systems like inertial measurement units, altitude measurement instruments and actuators to maintain the right orientation. All the systems will have to work extremely well to achieve this. The control laws and the understanding of Physics required for this is the real challenge. This is also something that ISRO will be trying out for the first time,” Prasad elaborated.

Prasad, a space expert who is currently based out of Germany, further feels that once the lander is safely injected onto the lunar surface, the critical aspect—and, again, a novel technology that ISRO will perhaps be testing for the first time in space—is the communication relay between the rover to the lander to the orbiting spacecraft, which then will talk to the stations on Earth.

“So, you have this complex communication relay to be working well to be able to be sure of getting all the payload data from the instruments and to be able to monitor the health of not just the craft orbiting the moon but also the lander and the rover on the surface. So, broadly, the complexities of the mission will be the insertion of the spacecraft on the lunar surface after being in lunar orbit and the reliable communications relay that needs to be established between the different vehicles once the rover separates from the lander and the lander separates from the orbiter,” Prasad told THE WEEK.

Many experts are also of the view that it would be interesting to see how Chandrayaan-2 overcomes complex challenges, which then would also highlight the prowess of the ISRO scientists. Soft landing and surviving the extreme environment on the moon would be the most challenging part of the mission where lot of factors will need to be considered.

“Accurately incorporating local gravity variation on the moon in its descent trajectory, landing at the right landscape to avoid a communication blackout and autonomous landing with perfect unison of liquid engine throttling will be complex manoeuvres that Chandrayaan-2 will need to do. Besides this, firing the engines close to the lunar surface could cause black flow of lunar dust into the engine of the spacecraft besides extreme temperature variations. The 14-day lunar day and night causes extreme temperature variations on the moon from +127 degree Celsius to -173 degree Celsius. Deep vacuum surrounding will make it very harsh to operate on the lunar surface,” noted Pawan Kumar Chandana, a space expert and the CEO of Skyroot Aerospace Pvt. Ltd.

“Chandrayaan-2 will do a series of trans-lunar injection (TLI) burns to go to the vicinity of the moon’s orbit. There is very less margin for error in these burns and will have to be done with utmost accuracy.” Chandana told THE WEEK.

Academic experts such as Dr. Dibyendu Nandi also agrees that the final phase of the Chandrayaan-2 mission would be the most challenging and the margin of error would be very less. Nandi is professor, Department of Physical Sciences and Center of Excellence in Space Sciences India, Indian Institute of Science Education and Research (IISER), Kolkata.

“One of the most challenging phases of the mission is to make a soft landing of the Vikram lander on the lunar surface with the Pragyan rover inside it. This is the first time that a landing is being attempted on the unexplored South Polar region of the moon by any space agency. ISRO is attempting such a soft landing of an instrument for the first time in its history and this is, by far, the most difficult and challenging aspect of this mission in my opinion. For this landing to be successful, the lander has to separate from the orbiter and perform a series of breaking manoeuvres to reduce speed for a soft touchdown,” said Nandi.

Nandi, an astrophysicist, is however also of the opinion that, in its scope, Chandrayaan-2 is a great space observatory with multiple instruments and components that must interact and function together in complex ways for the overall mission to be successful.

“The technological and scientific gains from attempting such an ambitious mission is expected to have rich dividends for furthering our space-reliant society. Let us not forget that what started off as a fledgling organisation with sounding rocket experiments to study the ionosphere has now evolved into a space agency that supports telecommunications, weather forecasting, navigational and agricultural needs of the nation,” contended Nandi.