The Toofani: Before Rafale, IAF flew another French ‘storm’ fighter 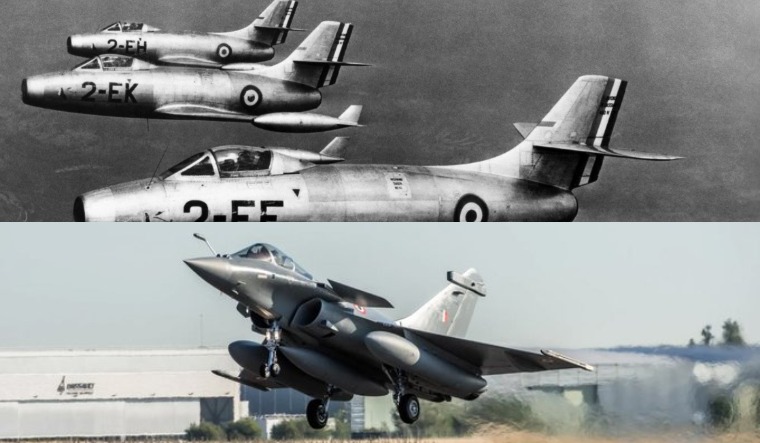 With the first batch of five Rafale fighters for the Indian Air Force taking off from France on Monday, much analysis is being done on the quantum leap in capability the aircraft will bring to India.

In addition to being one of the most formidable combat aircraft in operation today, the Rafale continues the long tradition of the Indian Air Force's dependence on fighters built in France.

The reliable Mirage-2000, the 'star' of the Kargil war and the Balakot air strike, was purchased from France in the 1980s, while the ground-attack Jaguar, another important Indian Air Force jet, was jointly designed by France and the UK.

One of the meanings of the word Rafale in French is 'squall', a localised storm. And storms have a symbolic importance in the India-France defence relationship.

The Rafale will open a new chapter in India-France defence ties, a relationship, which arguably took off in 1953 when the Indian Air Force inducted the Dassault 'Ouragan' fighter. The Ouragan—French for hurricane—was the first mass-produced fighter aircraft built by France after the Second World War.

Design work on the Ouragan began in 1947 and the first aircraft flew in 1949, a tremendous achievement for a country that had been ravaged by German occupation in the Second World War.

The Ouragan had a 'stovepipe' design with its air intake in the nose and low-mounted wings. It was equipped with a single British Rolls Royce ‘Nene’ engine. The Ouragan had an armament of four 20mm guns and could carry up to two 450kg bombs under its wings.

The deal with the Indian Air Force in 1953 is significant as it was the first export of French combat aircraft in around two decades. "On June 25, India ordered 71 Ouragans, which they renamed Toofani (Typhoons). The order was later raised to 113 aircraft," The Dassault Aviation website states.

The Ouragan was also exported to Israel, which used the aircraft to devastating effect as both as ground-attack platform and fighter in the 1956 joint invasion of Egypt with France and the UK. Israel even used the Ouragan in the Six-Day War of 1967.

The Toofani started being withdrawn from Indian Air Force service from 1965, meaning it served as a front-line fighter for little over a decade. The Toofani, which flew slower than sound, entered service at a time of rapid technological advancement in aircraft design. By the 1960s, supersonic aircraft were being offered for export and the Toofani's limited, size range and bomb load offered little advantage.

The progress in technology can be gauged from the fact that the Toofani had a maximum take-off weight of 7.9 tonnes; the Rafale can carry over nine tonnes of fuel and weapons under its wings and fuselage!

PS: Interestingly, the Indian Navy also operated a French aircraft that was named after a wind. The Breguet Alize carrier-based anti-submarine aircraft was used on the Indian Navy's first aircraft carrier, the INS Vikrant. The Alize, which means trade wind, saw action in the 1971 Bangladesh Liberation War.