‘Both beauty and beast’: 1st 5 Rafale jets for IAF take off from France

The five aircraft are expected to halt in the UAE, reach Ambala on Wednesday 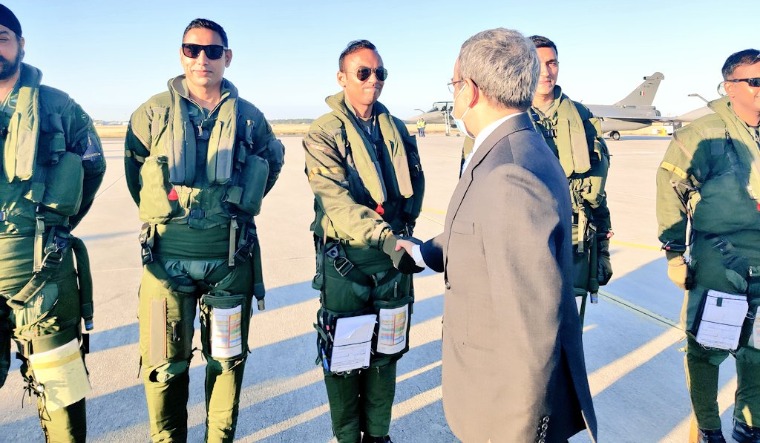 India's Ambassador to France Jawed Ashraf was present at the departure of the Rafale fighters. Ashraf interacted with the pilots. In a brief video uploaded by the Indian Embassy, Ashraf said "Our Air Force pilots tell us these are extremely swift, nimble, very versatile and deadly aircraft. They are both beauty and beast. They are superb flying machines being flown by the best pilots in the world."

Ashraf also thanked the French government and French Air Force for the assistance in training and preparation of the Rafale fighters for departure.

The aircraft are likely to arrive at Air Force Station, Ambala, on July 29. No 17 Squadron, the “Golden Arrows”, is being raised to fly the Rafale jets.

The Narendra Modi government had announced a deal to buy 36 Rafale fighters in 2015, with a formal contract inked a year later. Delivery of the aircraft was delayed on account of the COVID-19 pandemic. However, France agreed to India's request to send more aircraft to India in the first batch amid the surge in tension with China over Ladakh.

The Indian Air Force has announced its intentions to make the aircraft fully operational on their arrival in India and could possibly deploy them on the border with China.

The first Rafale fighter for the Indian Air Force was handed over in a ceremony in presence of Defence Minister Rajnath Singh in October last year. The delivery of all 36 aircraft is scheduled to be completed by the end of 2021.

The Rafale is the first new combat aircraft design to be inducted into the Indian Air Force since the Russian Su-30 fighter arrived in 1997. The indigenous Tejas Light Combat Aircraft was inducted in 2016.