Temple to honour DMK leader Karunanidhi to be built in TN 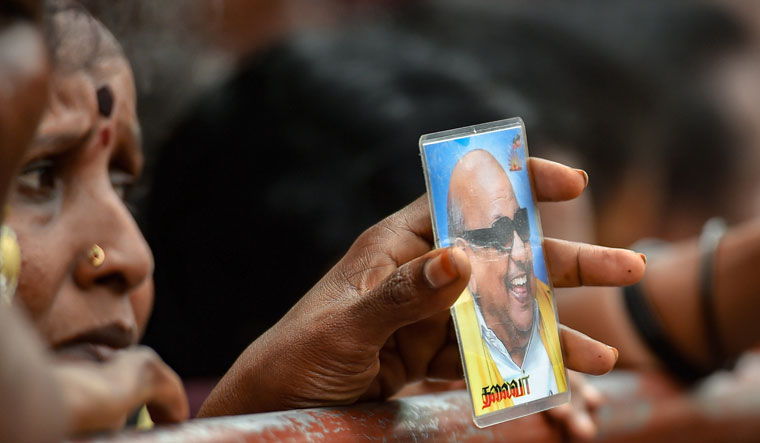 A temple is to be built in honour of late DMK patriarch M Karunanidhi, a self-proclaimed atheist, by people of a Scheduled Caste sub-sect at a village near Namakkal, recognising his contribution in carving out separate reservation for them in Tamil Nadu.

The 'bhoomi puja' (ground breaking) ceremony for the Rs 30 lakh temple, to be built in association with the local DMK women's wing functionaries, was held on Sunday at Kuchikadu village, about 37 km from here.

The initiative is a "mark of thanksgiving to Kalaignar (as Karunanidhi was popularly known," for earmarking three per cent quota in government jobs and education for the Arunthathiyars as part of the reservation for SCs during the DMK regime a decade ago.

Bhagyam and Meenakshi of Kuchikadu told reporters that the estimated cost of building the temple, to come up on a piece of land donated by a group of the village residents, was about Rs 30 lakh.

Arunthathiyar community people of the village in association with women's wing functionaries performed 'bhoomi puja; for the shrine, Bhagyam said adding "we regard Kalaignar as our family (clan) deity for providing us reservation."

"As a mark of our gratitude, we are buidling temple for Kalaignar, we build temple for Gods expecting that Almighty will do good for us; for Kalaignar we are doing this for what he has already done to our community," Meenakshi said.

The legislation envisages a sub-quota of three per cent (in education and jobs) to Arunthathiyars within the 18 per cent set apart for the Scheduled Castes.

Arunthathiyars include the castes of Arunthathiyar, Chakkiliyan, Madari, Madiga, Pagadai, Thoti and Adi Andhra in the list of SCs.