Why Karunanidhi continues to be an influencer in Tamil Nadu politics 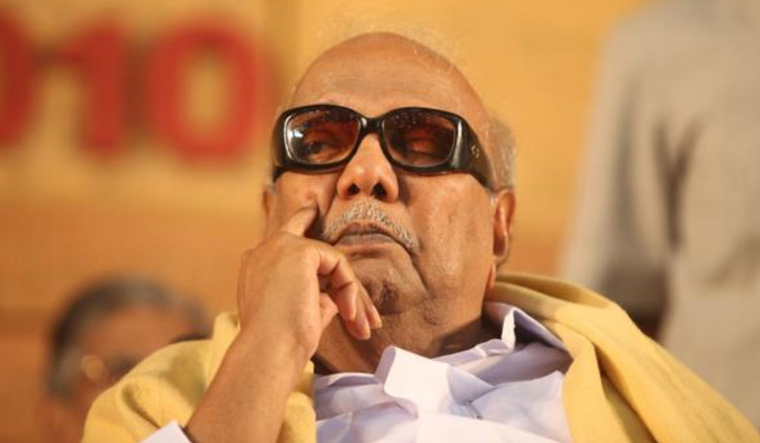 On August 5, as the entire country was chanting Jai Shri Ram and hailing Prime Minister Narendra Modi for laying the foundation stone for Ram temple in Ayodhya, Tamil Nadu was praising Ravana–the villain of the Ramayana. The Dravidian land was replaying one of the old audio bytes of DMK’s former leader M. Karunanidhi. “Was Lord Ram an engineer? In which engineering college did he study? There is no historic evidence to say that Ram Setu bridge existed.”

Yes, even two years after his death, Karunanidhi continues to keep the Hindutva forces on their toes. The former chief minister's relevance holds good because, as it was during his regime in 1989 social security measures were introduced in the state.

Though Karunanidhi was friendly to everyone including the Brahmins and even had all of them around him every time, the late leader was a symbol of action.

The backward caste reservation and the setting up of A.N. Sattanathan Commission in 1970 had sown the seeds of reservation, though it was later increased from 31 per cent to 50 per cent by MGR and then to 69 per cent by Jayalalithaa. In 1970, he brought in a law which allowed any trained person, irrespective of caste, to become a temple priest. He symbolized Tamil pride—by opening Valluvar Kottam in Chennai, building Thiruvalluvar statue in Kanyakumari next to the Vivekananda rock and getting the classical language status for Tamil language.

“More than any other time in the recent history, as the ascendancy of Brahminical forces are reaching new heights day in and day out, the relevance of Karunanidhi is gaining strength. In spite of all his shortcomings, today he represents, though he is not alive, the voice of the most backward community people,” points out senior journalist R Mani.

The DMK has launched a virtual rally to celebrate their leader. “His political heir and son M.K. Stalin has taken up the daunting task of taking Karunanidhi’s legacy forward because Hindutva forces have launched an unprecedented all round assault on the secular fabric of the country, which is felt in Tamil Nadu more than any other part of the country because of the state’s rock solid social justice foundations,” adds Mani.

On Karunanidhi's second death anniversary, DMK President M.K. Stalin has vowed to take forward the party to the seat of power for the sixth time. In an open letter to the cadre, Stalin asked party cadre to bring party back to power in 2021. Recalling the initiatives undertaken by his father for the welfare of Tamil Nadu, Stalin said: “At a time when the country’s federal system is under threat, the rights of states are taken away and some divisive forces are indulging in diversionary tactics, we need the presence of Kalaignar amongst us, like never before”.