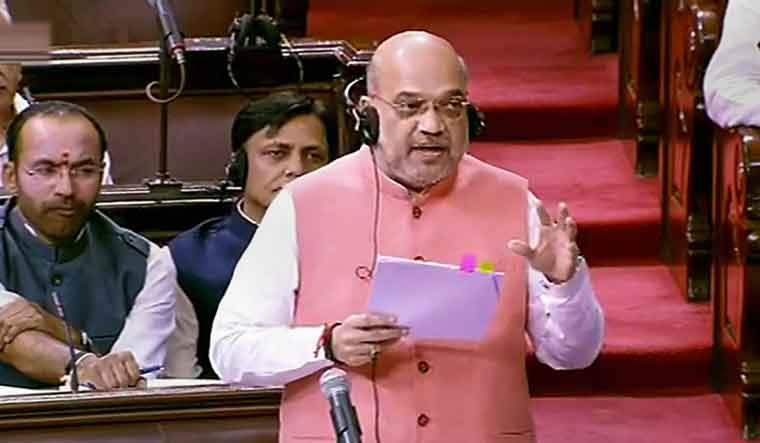 Home Minister Amit Shah, in his Rajya Sabha address, reiterated former prime minister Atal Bihari Vajpayee's 'Jamhuriyat, Kashmiriyat, Insaniyat' line on Kashmir (peace, Kashmir for Kashmiris, and humanity). "Vajpayee had said that solution of Kashmir's problem should be in 'Jamhuriyat, Kashmiriyat and Insaniyat'. I reiterate today that the Modi-led government is also working on Atalji's path," he said, reported ANI. He further added that Kashmir will always remain an integral part of India.

Home Minister Amit Shah presented two bills related to Jammu and Kashmir in Rajya Sabha on Monday. While one was the Jammu and Kashmir and Reservation (Amendment) Bill, the second one proposed the extension of president's rule in the state by six months. The House is currently discussing the statutory resolution for extension of president’s rule, with Amit Shah set to speak on the topic in the Rajya Sabha at 7pm on Monday.

"I have brought the proposal to extend by six months the president's rule in Jammu and Kashmir which is ending tomorrow," said Amit Shah in Rajya Sabha on Monday. The Jammu and Kashmir Reservation (Amendment) Bill that will provide three per cent reservations in educational institutions and government jobs to those living within 10km of the international border (IB) along the Line of Control (LoC).

President's rule was first imposed in Jammu and Kashmir on January 3 and is due to end on July 2. Opposition parties have also reportedly backed Amit Shah's bill. Samajwadi Party (SP) leader Ram Gopal Yadav said in Rajya Sabha on Monday that the party would support the extension by six months of the President's rule in the state.

Shah had on Friday said assembly elections in the state will be held in a democratic, free and fair manner as soon as the Election Commission announces the dates. He had moved a statutory resolution in the Lok Sabha to extend President's Rule in the state for another six months with effect from July 3, which was passed by the Lower House.

Shah had also said Article 370 of the Constitution, which extends special status to Jammu and Kashmir, is "temporary in nature" and "not permanent".