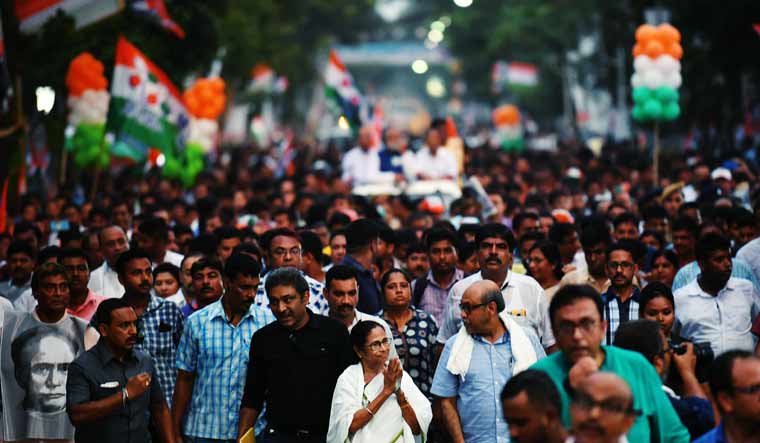 In first such action in India's electoral history, the Election Commission on Wednesday ordered campaigning in nine West Bengal constituencies to end at 10 pm on Thursday, a day before its scheduled deadline, in the wake of violence between BJP and TMC workers in Kolkata.

In a hurriedly-convened press conference, Deputy Election Commissioner Chandra Bhushan Kumar said it was for the first time that such an action has been taken using constitutional powers of the poll panel.

"This is for the first time such a measure has been taken using the EC's constitutional powers. But this is not going to be the last," Kumar said, referring to curtailment of campaigning period.

The EC also expressed "deep anguish" over the vandalisation of the bust and hope that the culprits will be arrested soon.

The EC invoked Article 324 of the Constitution to curtail the campaigning for the last phase of the election on May 19.

The order on curtailment of the campaigning was signed by Chief Election Commissioner Sunil Arora and fellow commissioners Ashok Lavasa and Sushil Chandra. The vandalisation of Vidyasagar's bust and clashes during Shah's road show in Kolkata on Tuesday triggered a fierce blame game between BJP and the Trinamool Congress.

Shah, at a press conference in New Delhi, alleged that Mamata Banerjee's TMC was involved in vandalising the bust and unleashing violence during his roadshow in Kolkata on Tuesday as part of a "conspiracy" to blame the BJP.

On its part, the TMC released videos to claim that "BJP goons" damaged the statue of Vidyasagar and said the videos not only establish what the saffron party did, but proved that Shah is a "liar" and a "dhokebaaz" (betrayer).