Gehlot in damage-control mode after blaming Pilot for Jodhpur loss 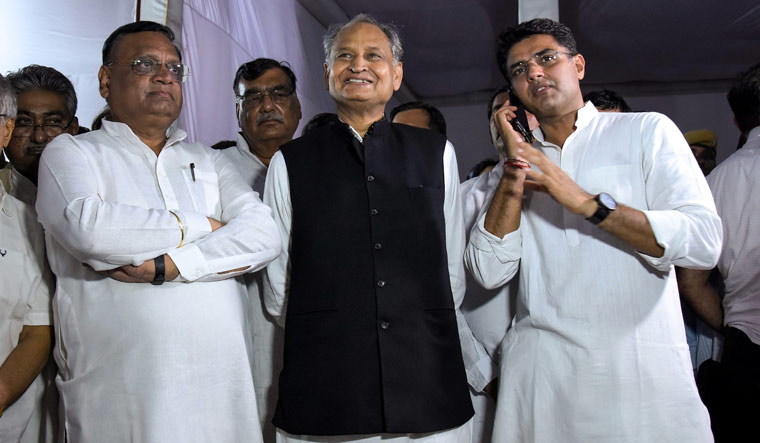 The gloves are off in Rajasthan Congress. After being blamed for the drubbing the Congress received in the Lok Sabha elections, Chief Minister Ashok Gehlot said that his bete noire, Deputy Chief Minister Sachin Pilot, should own responsibility for at least the defeat in Jodhpur, where Gehlot's son Vaibhav was fielded.

The Congress failed to win even one of the 25 Lok Sabha seats in the Rajasthan, less than six months after it won the assembly elections in December, 2018. “Sachin Pilot had said that the Congress will win Jodhpur with a huge majority, that all the six MLAs are ours and we have carried out an excellent campaign. So, I feel, Pilot Sahab should take responsibility for at least that seat. There ought to be a post mortem to find out why we did not win the Jodhpur seat,” Gehlot said in an interview to a TV channel.

However, as the interview went viral, Gehlot tweeted that he was being quoted out of context. He posted a clip from the interview and stated alongside, "This was reply to some questions during interview... Some sections of the media are making unnecessary issue out of the context".

The chief minister was responding to a question on Pilot, who is also the state Congress president, having given the guarantee in the run-up to the elections that Jodhpur will be won by the party. He, however, immediately added that when the party has lost all 25 seats in the state, it is neither for the chief minister nor for the PCC chief to take responsibility for the electoral debacle. “It is a collective responsibility,” he said.

It is worth noting that Jodhpur is recognised as Gehlot's stronghold, and he is an MLA from Sardarpura assembly segment in the constituency. Vaibhav lost the election by a mammoth margin of 2.74 lakh votes to Union minister Gajendra Singh Shekhawat. The Congress failed to establish a lead even in Gehlot senior's own seat Sardarpura.

Gehlot's comments have to be seen in the context of the clamour in the Rajasthan unit demanding accountability be fixed for the defeat. The questions being raised about the party's humiliating defeat in the Lok Sabha polls just months after it won the assembly elections are being perceived as being critical of Gehlot's leadership. Pilot has not responded to Gehlot's interview, but has expressed surprise at his comments.

The chorus of voices seeking accountability for the defeat gathered steam after party chief Rahul Gandhi, at the Congress Working Committee meeting called to discuss the reasons for the Lok Sabha rout, hit out at senior leaders for putting their sons before the party's interests. And it was interpreted that among the leaders in question was Gehlot, whose son made his electoral debut from Jodhpur.

Gehlot's critics were quick to claim that he had invested majority of his time and effort on the campaign in Jodhpur, and this was at the cost of the other constituencies in Rajasthan. The Gehlot camp responded by bringing out a factsheet of the chief minister's campaign during the Lok Sabha polls, according to which of the 104 rallies that he addressed in the state, only 11 were in Jodhpur. It was also pointed out by them that the Congress failed to win in other states, too, where it was expected to do well.

Amidst the open rift in the faction-ridden Rajasthan Congress following the poll whitewash, both Gehlot and Pilot were in Delhi in a bid to meet Rahul and explain their side of the story to him. However, it is learnt that they failed to meet Rahul, who had gone into a shell after declaring in the CWC meeting that he wants to step down as the party chief owning responsibility for the election defeat, and had separate meetings with Congress General Secretary Priyanka Gandhi Vadra at Rahul's residence.

The Pilot camp maintains that he had led the Congress to the victory in the assembly elections just a few months back, prior to which he had ensured the party's win in the Lok Sabha bypoll in Alwar and Ajmer. It is felt that he got a raw deal when he was not made the chief minister after the party won the state polls, unseating the Vasundhara Raje-government. Pilot's hardwork and sustained campaign against the Raje establishment since he was named Rajasthan PCC chief in 2013, when the party was reduced to just 21 out of the 200 seats in the state assembly, is alluded to.