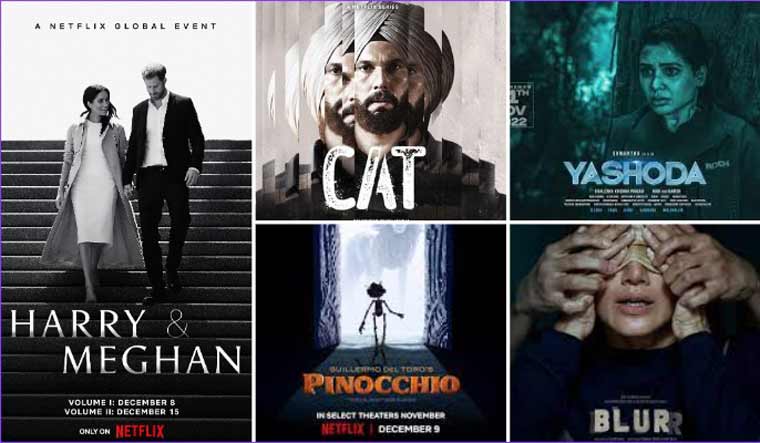 In the second week of December, a few thrilling releases await us. Netflix docuseries Harry & Meghan is the most high-profile release this week. Here is a look at all the movies and shows arriving on various streaming platforms.

Taapsee Pannu-starrer psychological thriller is having a direct-to-digital release. Also starring Gulshan Devaiah, the film revolves around Taapsee's character Gayatri who is slowly losing her sight whilst trying to investigate the death of her twin sister. Taapsee was last seen in time travel thriller Dobaaraa.

The crime thriller series starring Randeep Hooda is set in the backdrop of Punjab hinterlands. It follows the story of an innocent man, who is thrown into a drug trafficking conspiracy between gang lords, cops and political powers. Balwinder Singh Janjua who has previously penned films such as Saand Ki Aankh and Mubarakan, has co-directed the show with Rupinder Chahal and Jimmy Singh.

The first three episodes of the much-talked-about docuseries will arrive this week. The documentary delves into Prince Harry and Meghan Markle's marriage and their controversial decision to leave the royal family. Besides Harry and Meghan, the series will feature interviews with their friends and 'royal family experts'.

The campus comedy-drama released in theatres in October. Directed by Anubhuti Kashyap, the Ayushmann Khuranna-starrer revolves around a story of a budding doctor who ends up enrolling himself in gynaecology for post-graduation due to lack of a seat in his desirable subject. The film also stars Rakul Preet Singh and Shefali Shah.

The Samantha Ruth Prabhu-starrer thriller received positive reviews when it released in theatres recently. Directed by Hareesh Narayan and K Hari Shankar, the plot revolves around a woman who agrees to join a surrogacy program out of desperation to find her missing sister. Things start to go haywire when revelations about the high-end surrogate facility come to light. Samantha had also received praises for her action sequences in the film which also features Unni Mukundan, Varalakshmi Sarathkumar, Sampath Raj and Murali Sharma.

Filmmaker Ashwiny Iyer Tiwari's debut web series, Faadu revolves around the relationship between the characters essayed by Pavail Gulati and Saiyami Kher. Faadu features Gulati as Abhay, an angry poet and dreamer who aspires to reach his goals faster than time. Kher plays the role of Manjiri, a poetess who has a different philosophy about life.

In this stop-motion musical adaptation of children's classic, Oscar-winning director Guillermo del Toro reinvents the story of the wooden toy that was brought to life. Along with elements from the original story, del Toro's movie will explore more angles and darker themes. Pinocchio features a star-studded cast of voice actors with Gregory Mann as Pinocchio and David Bradley as Geppetto.

Malayalam thriller Roy, starring Suraj Venjaramoodu, revolves around his titular character who is in search of his missing wife. The mystery drama directed by Sunil Ibrahim, also features Shine Tom Chacko as a cop.