Blaming govt is useless as slowdown due to more than just noteban and GST: Roy 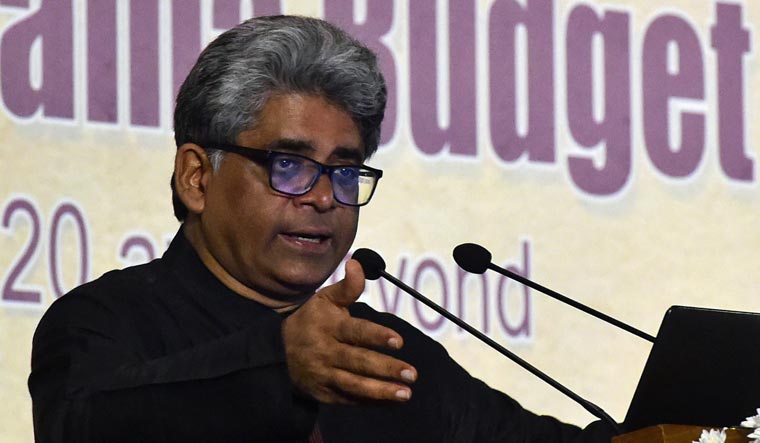 Tax reforms must make the tax system simpler, so people may pay their taxes with clarity about why they are paying them, said eminent economist Rathin Roy on February 6, while speaking about the new provisions for income tax in the union budget presented by Finance Minister Nirmala Sitharaman.

He observed that the tax reforms presented in this budget, however, had only added to the confusion around income tax.

Roy was delivering the 21st Malayala Manorama Budget Lecture in Kochi on February 6. The series was started by the Malayalam newspaper to encourage informed discussions about the Union budget among the public.

"It is my contention that the reason we are unable to collect taxes year after year to the extent we want to collect them is [that] our system is complicated, cumbersome, difficult to administer and therefore extremely inefficient," said Roy, director of National Institute of Public Finance and Policy, Delhi.

He had begun his 46-minute lecture saying that the budget could not offer a panacea to the economic slowdown because the Central government has, for a long time, been "severely structurally constrained".

The structural constraint can be explained in three bullet points, said Roy. "[The first is that] year after year, the Central government has not been able to collect the taxes that it says it will collect. And the shortfalls are large. Secondly, the government has for some time been relying on disinvestment to finance its budget. But, just like taxes, year after year, the government is simply not able to disinvest to the extent it wants to." The third problem, Roy said, is that more than 50 per cent of government spending is committed expenditure such as pensions and interest payments on debts.

Roy said that he disagrees with his fellow economists who maintained, before the budget announcement, that the government should increase its fiscal deficit and spend more. "I was a fairly lone voice, maybe [there were] three of us, trying to explain to my professional colleagues that the government will borrow more, but it will not be able to spend more," he said. "Because the fiscal deficit has gone up—from 3.3 per cent [of GDP] that was budgeted to 3.8 per cent. Massive increase. But that 0.5 per cent increase is not even equal to the shortfall in taxes (0.7 per cent). Disinvestment has fallen short by 0.2 per cent. Total shortfall is 0.9 per cent. So, every single rupee of the fiscal deficit has gone to plug this hole in tax revenues. Not one penny has gone for increased expenditure."

Even worse, he said, was that the increase in fiscal deficit (0.5 per cent) and non-tax revenue (0.14 per cent) combined was only 0.64 per cent of the GDP, compared with a shortfall of 0.9 per cent. This forced the government to cut total expenditure “in a recession year”.

"Government did borrow, but it did not borrow to increase expenditure, because it could not," he added. "Because what it borrowed was not even enough to cover the shortfall in tax revenue. So, in addition to borrowing, the government had to cut expenditure." So, he said, we were left with a contracting budget, but a higher fiscal deficit.

So, if the government was simply unable to increase expenditure because of structural issues, what could be the solution to the current economic crisis? Roy said that any further fall in the growth rate of the economy from the current situation of 4.8 per cent would spell disaster. But, he does not feel that India is facing that scenario.

"Because, for the growth rate to fall any further, you would have to see [things like] people earning salaries losing their jobs in large measures, a collapse of agriculture and a further collapse of exports. I do not see all these things happening." Roy added that he was reasonably confident that the growth rate would improve, if not in the next two quarters, then certainly by September.

"But, the question is how much it will rise by," he said. "Suppose it goes till 6 per cent and stagnates. Then what? For this country to grow and for there to be employment and participation of citizens in economic activity, we need to grow by 7 per cent on average over 10 years. Next year, if we do not grow by 7 per cent, the five-year average will fall below 7 per cent."

Every year that the country grows by less than 7 per cent, he said, makes problems such as unemployment worse. "So, the question to ask is how we get back to 7 per cent growth," he said.

Roy maintained that blaming the government for the economic slowdown is useless.

"The economy is much bigger than the government," he said. "Everyone says things like demonetisation or GST [as reasons for the slowdown]. These one-factor things will not affect [the economy]. [We also hear] it is because of the bank crisis. The bank crisis was not caused just by the government of India. So, we need to have a conversation about the fall in growth rate and in that conversation, we need to worry about what the private sector is doing, what consumers are doing and of course, what the government is doing. He added that the government is not a "fire engine to come and rescue your cat which has fallen in a well".

Roy said that things that were powering the economy are losing their power to boost the growth rate. "The leading indicators of the Indian economy are automobiles, FMCG and aviation," said Roy. "That game is over. Other things will have to grow in this country. [Things] that are consumed by a wider section of society. At least people who are in the minimum wage."

People who are on minimum wage do not spend a large proportion of their income on FMCG and they are more dependent on the railways, he said. "So, we need to switch the demand composition of the economy towards things that all Indians who earn the minimum wage consume," said Roy. "That would be food, which is in a mess; low-cost housing, in which the prime minister has made a wonderful start [that] we need to scale up; health and education, and textiles."

Roy concluded saying that at least two-thirds of the required 7 per cent growth should come from health, education, affordable housing, textiles and a square meal. "That, broad bases the demand [and] protects us.

In the vote of thanks, THE WEEK's senior news editor Stanley Thomas said that Roy was a keen observer of a country still trying to meet the basic needs of a large number of its people. He added that Roy had not only raised concerns but had also offered solutions.