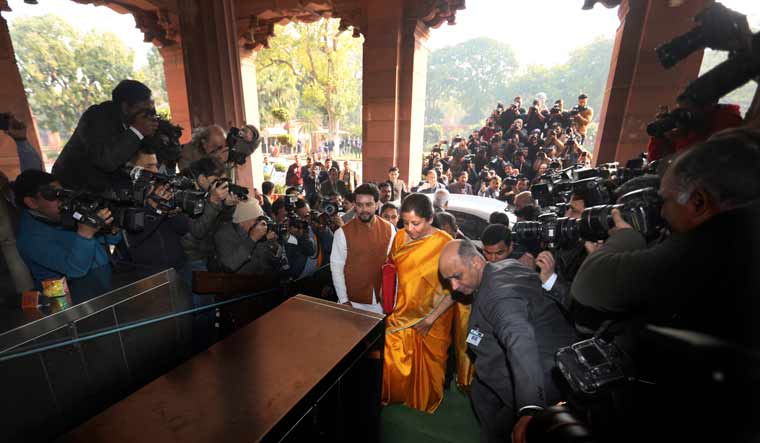 Finance Minister Nirmala Sitharaman on Saturday presented the first full budget of the second term of the Narendra Modi government, proposing huge packages for agriculture and infrastructure development, while also announcing lower income tax regime for individuals, in a bid to boost demand and lift a sluggish economy.

However, with few specific measures to stimulate some of the battered sectors of the economy like automobiles and real estate (barring affordable housing), the budget got a big thumbs down from equity markets. The benchmark BSE Sensex plunged 988 points or 2.4 per cent to close at 39,735.53 points and the wider NSE Nifty 50 was down 318 points or 2.7 per cent to 11,643.80 points.

India’s economy has sharply slowed in the past 18 months, with the GDP growth tumbling from 8.2 per cent in the April-June quarter of 2018-19 to just 4.5 per cent in the July-September quarter of 2019-20. While private investment had already been sluggish, a slowdown in consumption accelerated the fall in the economic growth.

In this backdrop, it was widely expected that the government would announce a slew of stimulus measures to revive the economy. However, with direct tax as well as Goods and Service Tax collections missing targets, it was always going to be a tight walk to either pump-prime the economy or focus on fiscal consolidation.

The finance minister has tried to address the pain points in key sectors like agriculture, enhancing healthcare facilities and more importantly, it announced a supposedly simpler new income tax regime for individuals.

A huge focus of the budget was on the farm sector, which provides employment for over half of India’s population while also contributing to around 15 per cent of the country’s GDP.

“Prosperity to farmers can be ensured by making farming competitive. For this, farm markets need to be liberalised. Distortions in farm and livestock markets need to be removed. Purchase of farm produce, logistics and agri-services need copious investments,” said Sitharaman.

An allocation of Rs 2.83 lakh crore has been made for financial year 2020-21 for agriculture and allied activities, irrigation and rural development. Some of the key initiatives included expanding a scheme to provide 20 lakh farmers to set up standalone solar pumps and a scheme to enable farmers to set up solar power generation capacity on their fallow/barren lands and sell it to the grid, which will be operationalised. The government will provide viability gap funding for setting up of efficient warehouses at taluka level and refrigerated coaches in express and freight trains, which will help in quick and efficient supply of perishables goods. It will also look at comprehensive measures for 100 water stressed districts.

Elsewhere, around Rs 69,000 crore has been allocated to the healthcare sector. The government aims to set up more hospitals under public-private partnership mode in smaller towns to expand the list of 20,000 empanelled hospitals under the PM Jan Arogya Yojana. An allocation of Rs 11,500 crore has been made towards the Jal Jeevan Mission where the aim is to provide piped water supply to all households.

The government has also talked of a new education policy that will be announced soon. Also, to increase the employability of students, about 150 higher educational institutions will start apprenticeship embedded degree or diploma courses by March 2021. To fill the shortage of qualified doctors, there is a proposal to attach a medical college to existing district hospitals.

To boost development of industry and commerce, government has allocated Rs 27,300 crore for 2020-21. The government aims to announce a scheme to encourage manufacturing of electronics, including mobile phones and semi-conductor packaging in India. It will also launch a new scheme to achieve export credit disbursement.

It's also looking at giving a boost to the startup ecosystem by providing early stage funding, including a seed fund to support ideation and development.

In a bid to speed up infrastructure development, the government would look to accelerate development of highways, which will include 2,500 km of access controlled highways, 9,000 km of economic corridors, 2,000 km of strategic highways and 2,000 coastal roads. Elsewhere 100 more airports are proposed to be developed to support its Udaan scheme.

However, the real estate sector was disappointed.

He said the sector's key demands like allowing restructuring of loans, increasing limit of Rs 45 lakh for affordable housing and scrapping of capital gains on sale of properties were not addressed.

The government had already announced corporate tax cuts last September in a bid to boost investment climate. It has now done away with the dividend distribution tax (DDT), which will now be be taxed at the hands of the investor.

While Sitharaman said the move would provide significant relief to individual tax payers, experts are not too convinced. People may save more in the new regime.

“The shift to a simplified scheme of personal income tax is another welcome move as it removes distortionary influences in the individual’s savings choices even though the actual tax savings may not be significant for those who were availing deductions and exemptions,” said V.P. Nandakumar, MD and CEO of Manappuam Finance.

Therefore, how much the tax cuts help in driving consumers to spend more is uncertain for now.

“The new direct taxes complicate the situation more than they resolved and would contribute a little surplus in the hands of the people,” said Raghvendra Nath, MD, Ladderup Wealth Management.

Furthermore, the government has raised import duties on several items in a bid to protect micro, small and medium enterprises and boost manufacturing and assembly in India.

“Labour intensive sectors in MSME are critical for employment generation. Cheap and low-quality imports are impediment to their growth,” said Sitharaman.

So duties on footwear, imported furniture and toys have been increased. Duty on imported fans and compressors used in air conditioners and refrigerators, as well as imported medical equipment has also been increased.

While it may well boost Make in India over the medium to long term, people will have to pay more for goods in the interim.

“The duty increase on certain components like compressors and motors and in some cases on finished goods, will help to further develop the manufacturing ecosystem in the country in the long-term. However, the move is expected to result in some price escalation in the short-run, on products like refrigerators, ACs, coolers, washing machines, air purifier and chest freezers,” said Kamal Nandi, president of CEAMA and business head at Godrej Appliances.

The government already had limited fiscal room to boost spending in the wake of the GST shortfall. Not surprisingly, the finance minister revised fiscal deficit target for 2019-2020 to 3.8 per cent of the GDP from 3.3 per cent. For the next financial year, it's pegged at 3.5 per cent.

“This expenditure increase, coupled with the income tax cuts, does not seem to suggest a large fiscal stimulus that the current slowdown perhaps warranted. Of course, the fiscal space to do that was limited to begin with,” said Abheek Barua, chief economist at HDFC Bank.

The tax exemption for sovereign wealth funds on their infrastructure investments should also help bring in more foreign direct investment in the long-term.

The LIC IPO will be clearly a big thing and will be keenly eyed by marketmen.

“The intention of an IPO of LIC will be a big positive for corporate governance and transparency and will open up one more avenue for fund raising for the government over the years. To privatise a small bank like IDBI bank is a step in the right direction where the government is clearly signaling its intention to move out of areas, which can be run well by the private sector,”said Krishna Kumar Karwa, MD of Emkay Global Financial Services.

However, it's pertinent to note that the government is set to fall well short of divestment receipts for the year ending March 2020. It had estimated to raise Rs 1.05 lakh crore via disinvestment, but those estimates have now been revised to Rs 65,000 crore.

“The disinvestment target needs to be monitored carefully as government has huge planned expenditure in FY21. Any shortfall will impact fiscal deficit target for 2020-21,” said Arun Singh, chief economist at Dun and Bradstreet India.

Equity markets tanked on Saturday, in a clear signal that investors were not enthused with the budget announcement.

“The government has made the decision in today’s budget to stay on the path of fiscal consolidation. This choice, while prudent, raises downside risks to growth,” said Vetri Subramaniam, group president and head of equity at UTI Asset Management.

“The alternative tax system discourages investments, which market participants do not seem to be comfortable with,” he added.

Overall, the budget has tried to strike a balance with allocating funds in key areas, while also keeping the fiscal deficit in check. No big stimulus means there may not be any instant boost to the economy, but a gradual improvement in the economy is seen, say experts.