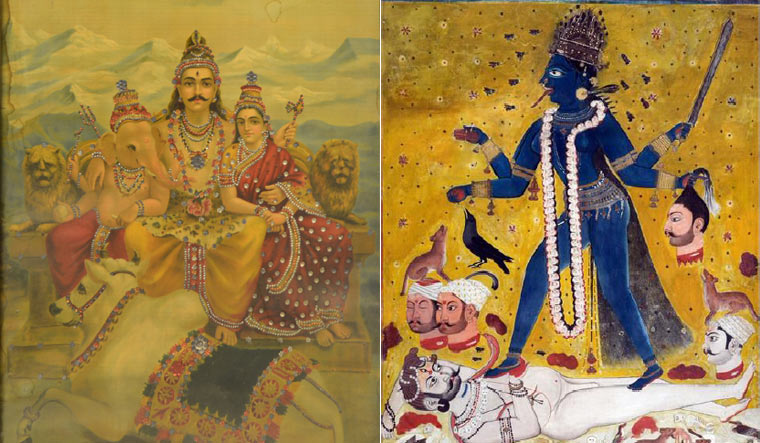 How will you really appreciate a painting of a spotted cat greedily holding a prawn in its mouth? At best, an art gallery visitor will be informed that the image belongs to the Kalighat school of painting from 19th century West Bengal, with information on its geography, date, medium and dimensions. There might be some sense of context if the visitor knows the title of the art exhibition or the gallery to which it is assigned; in this case, it could just as well be labelled and underserved as 'folk art'.

But sample this as a gallery text next to the cat-and-fish painting and feel heartily enlightened: " A recurring motif in Kalighat painting, the cat eating a prawn represents a hypocritical mendicant or sage —the bidal-tapasvi— who has renounced the world yet continues to indulge in worldly pleasures, and who's apparent commitment to the yogi's path is a sham, a mere cover for his sensual appetites as a bhogi." The note then goes on the explain how Kalighat painters (who plied their trade in the vicinity of the Kali temple along the banks of the Ganga) critiqued the life and manners of the rich and famous in 19th century Calcutta. And how this influential set constantly straddled traditional values and modern, aspirational behaviour.

In the exhibition The Sacred Everyday: Embracing The Risk of Difference, commissioned for the Serendipity Art Festival in Goa this year, the sacred and the profane, the divine and the domestic effortlessly intersect and commune. The incredibly comprehensive exhibition seeks to present the plurality of religious traditions in India and how they have never existed as monolithic, exclusionary doctrines. Especially relevant in our time of growing intolerance and communal polarization. There is calendar art, popular prints, shadow puppets theatre, masks, liturgical furniture, and "sacred geometry" as religious art. Drawn from 13 individual, family, foundation and public collections, a mind-boggling 200 art objects are displayed at the Adil Shah Palace, a spectacular art space between old Panjim and the still, sweeping Mandovi river. While the gilded paintings and artefacts line the white walls in seamless rectangles from one room to another— with a segment on miniature paintings displayed at the Church of Santa Monica in Old Goa---your eyes can never waver from the wall texts accompanying the art. You seek them out. You want to gobble them all in even though, sometimes, it might be a bit too long and densely populated.

With such an exhaustive mandate to fulfil, where viewers flit between paintings of Gram Devtas of Goa to Kamadhenu (the wish-granting cow) of the Trichinopoly album, Dakini Devi to Raja Ravi Varma's Vishnu Vahana Garuda, it is these expertly crafted wall texts, as prominently displayed as the artworks, that come to your rescue. In the deft curatorial hands of art critic and cultural theorist Ranjit Hoskote, the words hung on the walls are essential reading, not just for their educative or insightful value but for the way their inspire renewed scrutiny of otherwise everyday images. The exhibition is not exactly premised on contemporary art which can afford to eschew superfluous information, for viewing abstract installations is a more subjective experience. "In The Sacred Everyday, I work with adjacency and surprise as key devices, as when I place the Buraq, the Kamadhenu, and the Buraq-Kamadhenu in alignment. Or when I place Raja Ravi Varma’s Vishnu mounted on the mythic eagle Garuda next to a popular print from Sehwan showing Lal Shahbaaz Kalandar on his fabled king falcon. Such moments in an exhibition require context, further illumination or elaboration. Hence the need for texts, " says Hoskote on the guiding idea behind the copious wall texts for this "transhistorical" exhibition.

And art emanating from religious iconographies, rituals and mythic narratives does require explaining. The calendar art on Ka'aba Sharif and Sri Ganesha goes on to explain the significance of the centre of global Islam and the revered deity of the Hindu pantheon, respectively. But they also add this crucial piece of information: the Ka'aba is depicted by a Hindu calendar artist S.Chopra and the portrait of Ganesha is made by Muslim calendar artist Qamar Naqvi. Or how the Issanama ('story of Jesus') series —mounted in a church, inspired by the Hamzanama and painted by Rajasthani artist Manish Soni in the Mughal, Rajput, Pahari and Safavid styles— points out that "Christianity, and the human reality of the Christ narrative, must look eastward to its point of origin."The material and the works presented in this exhibition are at once familiar and strange. The Sacred Everyday has a driving political purpose – to resist the divisive and polarizing forces that have injected toxicity into our public sphere and shared social space, by demonstrating how syncretic, confluential and diverse our culture has in fact been for centuries," says Hoskote, reinforcing the significance of the exhibition at this point in time.

Last month, an American artist at The Met in New York attached her own wall labels next to paintings by doyens like Balthus, Paul Gauguin and Pablo Picasso, calling out their misogyny and abuse of power. Is there is a need for more authentic and revisionist wall texts in Indian art galleries as well? Since museums have a public mandate, Hoskote believes they bear additional responsibility for this change unlike private galleries who are free to choose how much or how little they want to display as wall text. "We do not have to wait for artists to lead the way. This criticality should be a distributed one in the museum domain – curators, administrators, theorists, and educators all have a responsibility to serve here," he adds.