You have to politicise art: T.M. Krishna 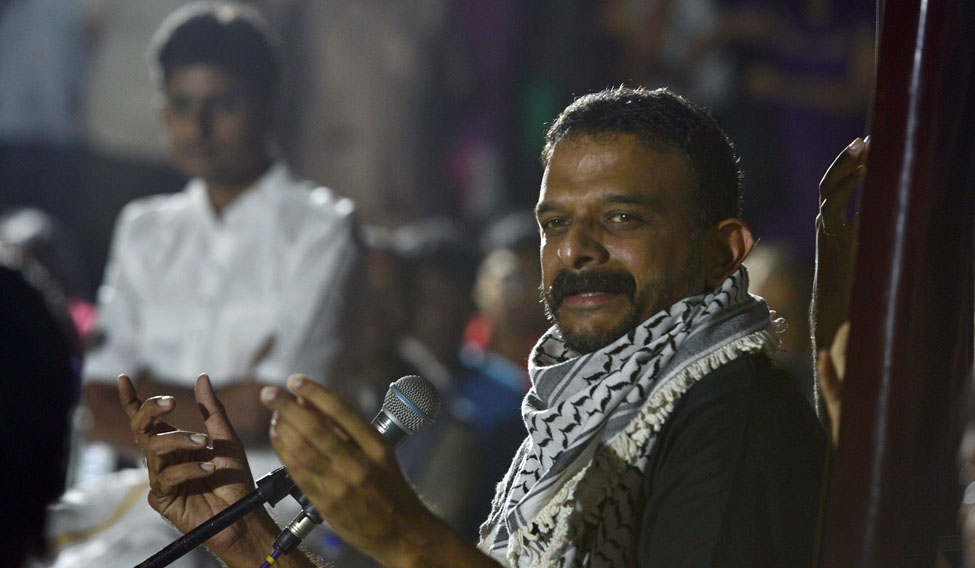 The vizha is an idea, not bound to a geographic location

Three years ago, musician T.M. Krishna, in a Facebook post, announced that he would not be singing in the December music season. He wrote, “I am unable to reconcile my musical journey with that of the December season”. In 2016, he was awarded the Ramon Magsaysay Award under the 'Emergent Leadership' category, very rare for a Carnatic musician. The award committee hailed him for “showing that music can indeed be a deeply transformative force in personal lives and society”. He is a strong voice of dissent in the world of Carnatic music and does not mince his words. Edited excerpts from an interview:

First, I did not do it alone. Four years ago, it was just a thought of what would happen if we did a festival in a different context. This was the simple idea. But I didn't do much about it because of my lack of idea of different contexts. That is when I met Saravanan, from Urur-Olcott Kuppam, and Nityanand Jayaraman. From our discussion, we came up with the idea of the fisherfolk community and the larger Chennai community coming together. We thought of creating a space where people from different walks of life, from different sections of the society, from different cultural backgrounds, can come together in a fishing village, and witness various art forms in an equalising space. This changes the context of art. From that it developed, and now the vizha has volunteers from across the city and from outside the city.

Was choosing Urur a conscious decision?

No, Urur came because the village was very welcoming to the idea and Nityanand's office is in Urur kuppam (fishing village). And when we spoke about it, Saravanan (one of the main organiser who is also from Urur village) said “Ingaye panlame” (we can do it here). So, that's how Urur and Olcott kuppam became the partner. The village is very important. There is a misconception brewing that they are just the hosts. No, they are the curators, it's their festival.

The media has time and again portrayed the vizha as taking “Carnatic music to slums”. How do you see that?

No, that is something I don't agree with. And there is a lovely piece that Saravanan himself wrote. It is something we all should introspect. For every art form, it is about negotiating the complexities, and it is about taking art to all spaces.

The vizha is not a competition to margazhi festival?

No, a lot of people who go for kutcheries and margazhi  festival come for our vizha, too. Yesterday, we saw a very interesting gathering [in Raga Sudha Hall], a very unusual mix of people. People from Mylapore who normally come to the Raga Sudha Hall and sit for kutcheris, young dudes who never knew where Raga Sudha Hall was in their life time, people and children from Urur and Olcott. That is the whole idea. We are not competing with anything. The idea is, everybody comes to the space, and cultural exchange happens. Hopefully, some transformation can happen.

Was performing in public spaces a conscious decision?

Absolutely, after the first two years, the vizha became an idea. It is not bound to a geographic location. It is also an idea about what art can do in society. The next step was to take it to other places in the city. Public spaces, where all kind of people come. The moment we change the location of an art form, everything changes; the art form changes, the artist changes, the audience changes, and the experience changes. The most fascinating thing about being in a bus or a railway station is that you are completely vulnerable, which means you are opening yourself up to the art, and audiences are free while experiencing it. Also, in any kind of social transformation, that's what we hope for. The freedom in receiving people and accepting people. I think public spaces have a huge role to play in the way we interact with each other. We performed in buses, which ends in Besant Nagar [where Urur and Olcott are located]. We must also say that the government officials have been extremely supportive.

As an artist, how do you see the interaction between different art forms?

I think it is very essential. It is absolutely imperative. But, it rarely happens. That is because every art is completely engrossed in itself. If every art form has to enrich itself, artists have to enrich themselves. They have to come into contact with life. When I say life, I mean life beyond the boundaries that we draw around us. Which is walking down the street, talking to all kinds of people, listening to all kinds of music, and to be able to do all this without being judgemental. The problem with artists is that we are so conditioned by our own art that we judge every other. This is also a reflection of the society. In a way, art reflects exactly what we are as human beings. So, we have to break this paradigm, which means we have to experience different art forms. Sometimes, this doesn't happen naturally. That is why things like Urur-Olcott Kuppam Vizha are very important, because it puts you in a situation where you will experience other things. Perhaps it will be transformative, change a little part of you.

And the vizha is very outspoken about its politics.

One of the things, and I speak for myself, is that every volunteer in this vizha have their own ideas. That has been a very lovely thing. The point of views have been very different. What they get from the vizha is very different. And this has been a very live space for discussion. As I see it, you have to politicise art. Unfortunately, politics has derived some wrong connotations in today's world. Politics is who we are. Electoral politics is actually the worst representation of it. Therefore, the UOKV does not hide behind any kind of sanitisation. The complexities of whatever is played is played out.

It is vocal about social and environmental issues, too.

After the flood, it would have been incredibly insensitive for us to go around having a vizha, without recognising the tragedy that had happened. That time we all got together and felicitated all the fisherfolk who helped in the recovery, we honoured the workers. The point is art must respond to the environment. How each art form responds has completely to do with that aesthetics of that form. To put it bluntly, to hide away from it is not art.

What about the performances this time?

We are exploring multiple spaces within the vizha. One is performing in sabhas [in Mylapore], which we started last year. It has grown, and we are all moved by it. And the main vizha will happen in the beach. Another important thing the village has been trying to do is to create a fish market and use it for performances every month. The point is every space is a cultural space. The place of economics is also a cultural space. A space stays alive only when it is cultural, not when it is just purely economic. This is also to invite more people to the village to buy fish. There is both economics and art involved in this.

This discourse we started as a simple art festival has grown, and we know that many discourses are interwoven. We are also discussing with the villagers as to how they want it. Do they want a permanent structure? The involvement of different people over the years has increased. And, this has happened with a lot of engagement. We are all moving slowly and we are learning in the process.

Your thoughts on The Casteless Collective started by director Pa Ranjith?

It is a fabulous idea. I am completely on Ranjith's side on this one. People who tell us not to bring caste into art are blind to the fact that caste does exist in art. Only the privileged has the luxury to say that there is no caste. I think it is a brilliant idea and I think calling it the “casteless collective” is political, and I am glad it is political. It is a great initiative. Glad that so many conversations and initiatives are happening. In the last one year, there have been so many discourses, even if people don't agree with it. The very fact that they have to respond to Ranjith itself says something. I am glad that it happened.