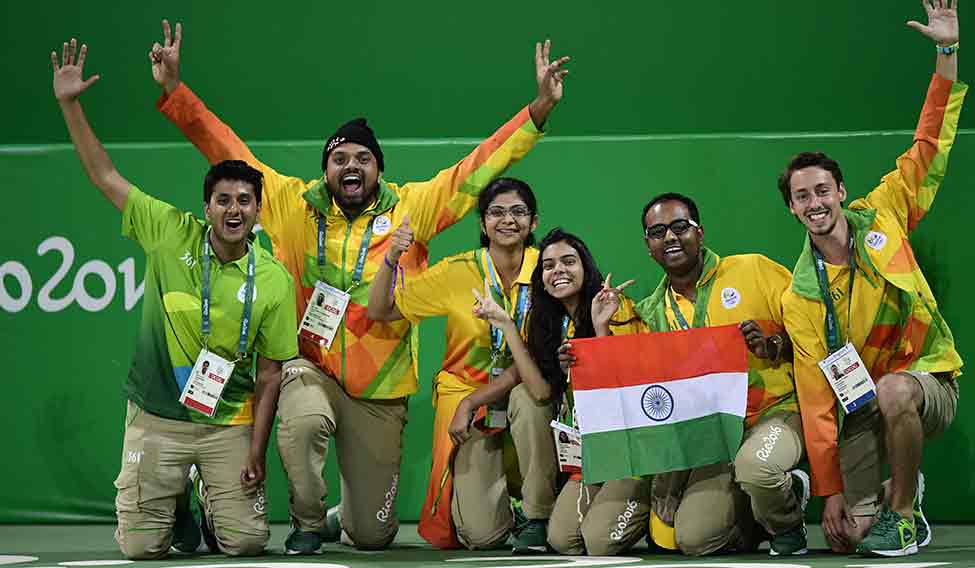 All [Indian] volunteers THE WEEK met agreed about Rio’s charm and about the warmth of the average Brazilian | R.S. Gopan

Indian volunteers: From shaking hands with the French president to crowdfunding a ticket to Rio

The doubles match between Sania Mirza-Prarthana Thombare and Shuai Zhang-Shuai Peng was yo-yoing between India and China. The tall boy was excited, hopping up and down on the sidelines. He would look up to the stands, where Sachin Tendulkar sat. And, then back to the scoreboard, and then go back to cheering the Indian side. And, he is not alone. India has sent “around 40 volunteers” to Rio.

Four years ago, when his sister Uma volunteered at London 2012, Shyam Datye did not think he would be doing the same in Rio 2016. But, her going was the beginning. The 21-year-old Chembur boy has just finished his BCom from R.A. Podar College, and what better way to spend college break! “I am really excited that my assignment is in Olympic Park [the main venue],” he said.

Cheering the Indian side with Datye was Caspar Moritz Henke, 22, from Germany. “Shyam and I are brothers,” he said. In 2014, Moritz was an exchange student at Mumbai’s Ruia College, and he stayed with the Datyes. “We applied together. Perhaps, I am more of an Indian entry at Rio, than German,” quipped Moritz. There is one more reason for him to be counted as an Indian entry—he studied Indology at Bonn University.

When Datye went as an exchange student to Germany, he stayed close to the Moritzes. Both families are very close now, and Moritz intends to come to India for “our sister’s wedding”. Uma, now an HR professional, is getting married.

Volunteers at the Olympics have to pay for their travel and stay. They get a volunteer kit—coats, shorts, caps, t-shirts, backpacks, shoes and Games literature—and an opportunity to rub shoulders with the most elite athletes in the world. This year’s beautiful kit is by 361 Degrees, a California-based sports label. 361 Degrees has supplied more than one lakh uniforms to Rio 2016.

Sandeep Sekharamantri, 30, an engineer with Shell in Doha, Qatar, works in the main press centre. “I used to volunteer for the UN and other organisations in Doha,” said the Hyderabadi. “I saw the call to volunteer here accidentally and grabbed the opportunity. It has been amazing. Meeting [footballer] Ronaldo, meeting members of the Indian contingent whom you have seen only on TV. International athletes walking by like normal people!” Perhaps, the only thing he misses is his family; wife Makarajyothi and daughter Srirasagna, 2, are in Doha. But, then, there is always Skype.

Nisha George, 34, and Ajay Thomas John, 34, are going to Peru once Rio 2016 winds down. The Chennai-based couple got inspired when Nisha’s former boss, John Burroughs, volunteered at London 2012. Nisha works for HP and Ajay for indiaproperty.com. “We applied in August 2014,” said Ajay. “Then, there was a group discussion over a conference call. We were 12 in that group, and the topic was, Which venue would you pick for football matches, and why.”

Among the many marvellous moments in Rio, Ajay says, meeting Tendulkar was the best. Nisha works with the accreditation team and Ajay is at Pavilion 3 at Rio Centro, the table tennis venue. In fact, Ajay & Co were the only ones cheering for the Indian table tennis side. And, after the game, a grateful A. Sharath Kamal went over and shook hands with all of them.

Chennai-girl Aditi Bharat, 23, crowdfunded her Rio dream through gofundme.com, a US-based site. An alumna of Stella Maris College, Chennai, she is doing her MSc in human resources management at Georgetown University, US.

“I was looking to travel to Rio when I saw the volunteering option,” said the bubbly Aditi. “And, once I got through, I put up the request on gofundme and shared it on social media. I didn’t want my parents to pay for this.” The smallest donation she got was $5 and the biggest was $100; her appeal was for $2,000 and she collected around $1,500. Aditi works at Rio Centro complex.

All volunteers THE WEEK met agreed about Rio’s charm and about the warmth of the average Brazilian. The problem most faced is the language. After one is taught that English is linguistic currency worldwide, Rio comes as a shock. Very few people speak anything other than Portuguese. So, Indian volunteers mostly work in administrative and international sections.

The most interesting experience THE WEEK heard was from Sandeep. “I was supposed to work with the Qatar Olympic Committee, but by the time I found my way there, someone else had taken that spot,” he said. “So, I was asked to go help the lone Brazilian at the guest accreditation desk.” Guest accreditations are for walk-ins; regular accreditations have to be applied for much in advance.

Sandeep continued: “So, we had finished work for the day and were winding up, when two Frenchmen walked up and said it was important that they get their accreditation cards. I don’t speak French, but I understood ‘important’. And, one man looked familiar. I asked him for his passport to process the form, and the name said Francois Hollande!” The French president was in town to pitch for Paris 2024. Sandeep helped the delegation get their cards, and was there when they gave their pitch. The proof of all that is pinned to the green ribbon of his accreditation card—a rectangular delegation pin that screams Paris 2024.