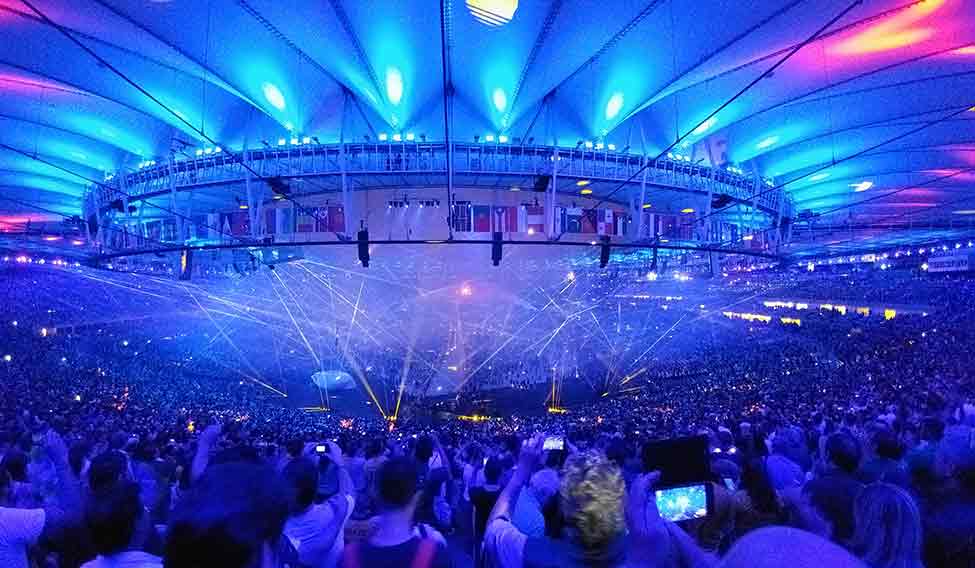 Maracana Stadium thrumming with energy and excitement during the opening ceremony.

The first weekend at the Olympics brought heartbreak. Then came a little solace. But India still awaits redemption

So, this is what it is like to live inside a rainbow! Anyone who was present for the Olympics opening ceremony at the Maracana stadium would have felt that way. The mecca of football was thrumming with energy, excitement and music. It was also drowning—in colours, in litres of SKOL beer and in thousands of toned bodies.

And, Brazilian philosophy was on display throughout. The fitness element came through with parkour players hurdling their way through a digital cityscape. Body beautiful was supermodel Gisele Bundchen doing her last catwalk. And, music! What better sample of the bossa nova can you get than The Girl from Ipanema? “Tall and tan and young and lovely/ The girl from Ipanema goes walking/ And when she passes,/ each one she passes/ Goes ‘A-a-a-h’...”

It was not just all dance and song. It was a statement. An alternative to the popular narrative. Climate change was featured prominently. The 14-Bis biplane that took to the air in the middle of the show paid tribute to Brazilian aviation pioneer Alberto Santos-Dumont. Many Brazilians believe that he, and not the Wright brothers, was the first to fly an airplane.

Then, there was the king of the curve, Oscar Niemeyer. The stage was a tribute to the late architect and so were the projected drawings on the floor when Bundchen walked in. Would India have a Charles Correa tribute on such a stage? 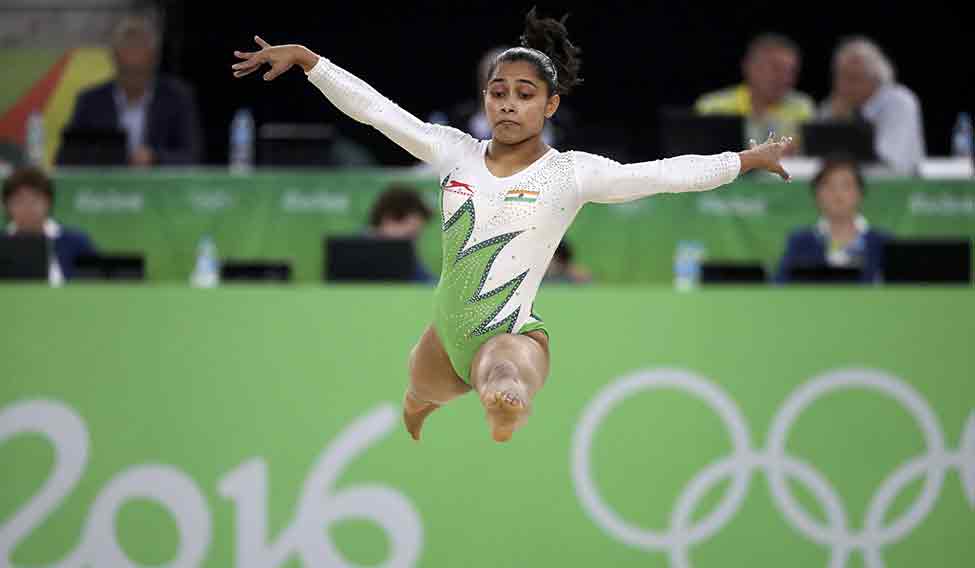 “It is not the right angle that attracts me,” Niemeyer famously said. “Neither does the hard, inﬂexible, man-made straight line. What attracts me is the free-form, sensual curve. The curve that I find on the mountains of my country, its winding river courses, the clouds in the sky, the body of the woman I love.” An architect being so sensuous and lyrical! He sang praises to his country, his muse. And, a grateful Brazil paid tribute at the greatest party it has ever thrown.

The land of football greats kept every one of them away when it came to lighting the torch. There were reports that Pele had been invited to the ceremony, but he opted out citing ill health. The honour eventually went to those who did the country proud in Olympic sports: tennis ace Gustavo Kuerten, “The Queen” of basketball Hortência Maria de Fátima Marcari and the tragic hero of the Athens 2004 marathon Vanderlei de Lima. The dapper Indian contingent got its share of whistles and applause, and then it was on to heartbreak weekend.

The archers had skipped the opening ceremony to focus on their events. In the men’s individual ranking round, Atanu Das survived an initial scare to come back strongly. The sole male Indian archer scored 683 out of 720 to finish fifth. He kept hopes flickering as he cleared the next round on August 9, too, to enter the round of 16.

The women—Deepika Kumari, Laxmirani Majhi and Bombayla Devi—fared poorly in the women’s team ranking round. Hopes were raised when they defeated Colombia to enter the quarterfinals, but the Russians got the better of them.

In the women’s individual ranking round, Deepika finished 20th, Bombayla 24th and Laxmirani 43rd. On August 8, Laxmirani was knocked out by Russia’s Alexandra Longova (1-7). However, a day later, Bombayla fought hard and made it to the pre-quarters.

Saturday, August 6, was a glum day for the contingent. The only pieces of good news were Dattu Baban Bhokanal finishing third in the heats of the men’s single sculls and entering the quarterfinals (in which he finished fourth on August 9), Jitu Rai’s eighth place finish in the 10m air-pistol event and the men’s hockey team’s first win, against Ireland.

In the women’s 10m air-rifle event, Apurvi Chandela finished 34th and rookie Ayonika Paul 47th. Paul’s father later told the media that she was crushed by the pressure. The gold in the event—the first of the 31st Games—went to Virginia Thrasher, 19, of the US.

Paes was visibly dejected, having to finish his Olympic swan song on this note. And, while Prarthana crumbled under pressure in the tight match, Sania defended her before the media. She asked the press to go easy on the rookie who had given her best. Sachin Tendulkar, in a leg brace, had attended the women’s match, and offered reassuring words to Prarthana’s parents and sister.

The men’s hockey team began well by defeating Ireland 3-2. India took the lead by scoring the first two goals (V. Raghunath at 15:00 and Rupinder Pal Singh at 26:36). Rupinder added one more at 48:45 to seal the game. In their second match, against world champions Germany, India narrowly lost (1-2) when Christopher Ruhr scored the winning goal in the 59th minute—with the just 3.1 seconds to go for the hooter. India’s sole goal was scored off a penalty corner by Rupinder. Some balm for the soul came as India beat Argentina 2-1, thanks to clinical strikes by Kothajit Singh and Chinglenana Singh, and superb saves by skipper P.R. Sreejesh. The women drew their first match (Japan, 2-2), but lost their second (Great Britain, 0-3) and third (Australia, 1-6). 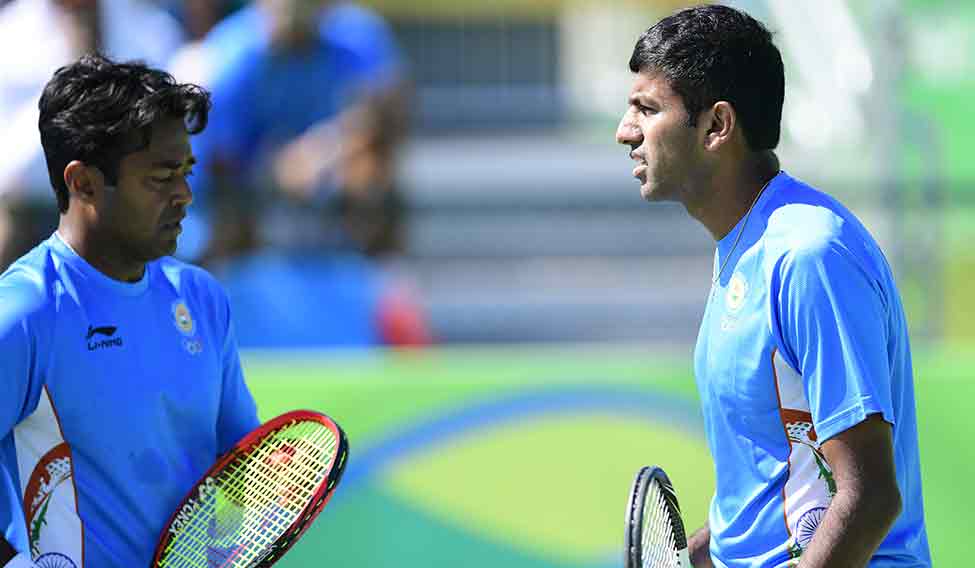 Leander Paes and Rohan Bopanna crashed out in their first round on August 6. Paes was visibly dejected, having to finish his Olympic swansong on this note | R.S. Gopan

The swimming slate was wiped clean when both Sajan Prakash and Shivani Katariya failed to make the semifinals. And, the same happened with the table tennis team—Mouma Das, Manika Batra, Soumyajit Ghosh and A. Sharath Kamal. In the 48kg weightlifting, Saikhom Mirabai Chanu failed to lift her weight and, thus, ended her campaign.

A WhatsApp message nearly gave a heart attack to some of us at Rio: “Congratulations! First gold medal. Flying angel Dipa Karmakar wins gold.” After a heart-stopping moment, everyone opened mailboxes and checked the day’s schedule. The contingent schedule is usually mailed the previous evening by V. Krishnaswamy, the effcient press attache. And, gymnastics was not even on the schedule! Then, the laughs came. Dipa, who hails from Tripura, had won the vaults gold at the test event in Rio in April. It was Rio that got everyone confused. Then, the Twitterati went berserk. It took some time for the rumour wave to die down. But, the reaction to the message shows how much the nation is counting on Dipa, who entered the finals of the vault. Similar was the excitement when Vikas Krishnan opened India's boxing show with a power-packed victory over America's Charles Conwell, and entered the round of 16 in the 75kg category.

The next big hope was Jitu Rai in the 50m air-pistol, his pet event. But he was way off the mark on August 9, and failed to qualify.

During the 10m air-pistol event on August 6, the crowd at the Olympic Shooting Centre in the Deodoro Stadium was wild and rooting for local boy Felipe Almeida Wu, top-ranker in the category. “Whoo, Whoo, Whoo…,” they chanted during the breaks. The 24-year-old army man was the hot choice for the gold. In between, when Wu took position, a non-Brazilian blew a vuvuzela and the crowd went mad. Men piled on to the vuvuzela man and volunteers came running to break the fight.

A tight competition saw India’s Gurpreet Singh failing to clear the qualification round. Jitu Rai had shot impressively in the qualifiers, finishing sixth in a field of 46. But, he could not keep the same momentum in the finals, where he had a poor start which carried on to the end. Among the final eight, he was the first to bow out.

The positioning of the final three was in the air till the last shot. “Every shot matters,” boomed the announcer. In the penultimate shot, Wu had the edge. But, with the last shot, Vietnam’s Hoang Xuan Vinh bagged the gold. It was Vietnam’s first Olympic gold ever. Wu finished second, earning Brazil its first medal in Rio 2016 and its first shooting medal since 1920. The bronze went to China’s Pang Wei; he had taken the gold in Beijing 2008. Title defender and world record holder Jin Jong-oh of South Korea finished fifth.

The other big heartbreak was Abhinav Bindra finishing fourth in the 10m men’s air-rifle event, missing the bronze by a whisker. India’s sole individual gold medallist had said earlier that he would retire after Rio.

All in all, it has been mostly heartbreak in Rio for the Indian contingent. But then, India remembers its athletes in four-year intervals—Asian Games, Commonwealth Games and the Olympics—and then it wants them to do the country proud. It does not work that way, does it? Our athletes fight against the lack of a sporting culture. For example, a Brazilian official who spoke to THE WEEK said that the Narsingh Yadav episode “sounded like a telenovela story” to him! So, a top 8 or top 4 showing is nothing to scoff at. 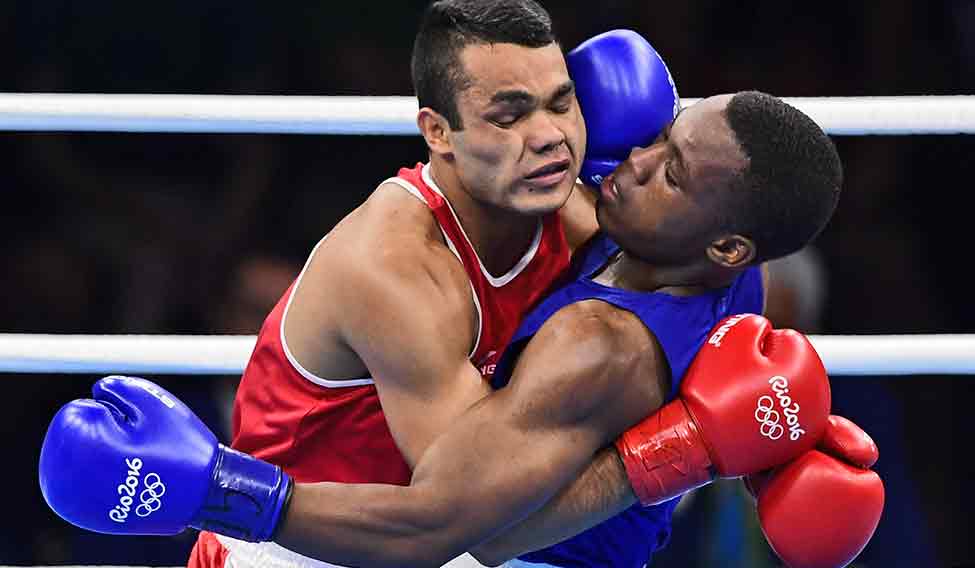 Vikas Krishnan (in red) opened India's boxing show with a power-packed victory over America's Charles Conwell, and entered the round of 16 | R.S. Gopan

Vijay Goel, Union minister of state for youth affairs and sports, who met the media at the Games Village, said, “Abhinav’s loss was not bad luck, but tough luck. So was the 60th minute goal by Germany. And, Dipa has done things we did not dream of. Yes, we have sent the largest contingent ever. But, the need of the day is to have a culture of sport. To qualify itself is a big thing, and it is a beginning.”

Goel said his ministry had put up ten huge screens in Delhi to beam the Olympics 24x7. “Let children see and be inspired,” he said.

Goel agreed with Indian Olympic Association officials and the media that language was an issue in Rio. Reportedly, no one in the Indian contingent speaks Portuguese. And, old hands say Rio 2016 is nowhere as organised as Beijing 2008 or London 2012. For example, the shooting range is 44km from Olympic Park, which houses most venues and the main press centre. And, the cumbersome security checks have irked both spectators and officials.

Raw sewage floating near Olympic Park did not help the image of the Games and its host. Neither did the bizarre incident in which a Brazilian man, who claimed to be a Russian consulate employee (denied by Russia), shot dead a hoodlum who tried to carjack him on the opening day. Or that News Corp photographer Brett Costello was robbed of photographic gear worth $40,000. The thief was later caught, when he walked into the main press centre wearing Costello’s numbered jacket issued by the International Olympics Committee!