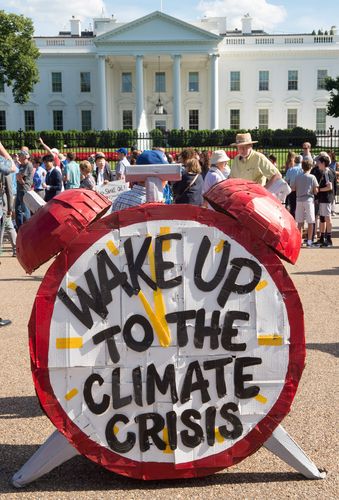 Out of time: A demonstration in front of the White House, objecting to Trump’s decision to withdraw from Paris accord | AFP

Donald Trump’s decision to withdraw from the Paris Climate Agreement to “protect the United States of America and its citizens” against a “draconian” and “bad” accord was met with universal condemnation. French President Emmanuel Macron called it “a mistake”, and to further snub Trump, he invited scientists, engineers, entrepreneurs and committed citizens to work in France to search for solutions for climate change. South Africa termed the US move as an abdication of global responsibility and damaging to multilateralism. Prime Minister Narendra Modi was even more blunt when he said “it would be a morally criminal act for the world not to do its part on climate change”. These reactions reflect the betrayal and frustration of the global community with the US on climate change issues.

The US has always been a “problem” country on climate change. It has, over the past 25 years, diluted the UN Framework Convention on Climate Change to reduce its own responsibilities and of other developed countries to solve climate change. In 1997, it first diluted the emission reduction commitments of developed countries under the Kyoto Protocol, and then refused to ratify it saying that countries such as China and India were not reducing emissions, and hence, it would not participate in a “flawed” protocol.

The Paris Agreement, similarly, was designed for and pushed by the US for its own convenience. As the US didn’t do its part to solve the climate problem, it pushed for an agreement which was a ‘common minimum denominator’. The ‘minimum’ being what the US wanted to do.

• The Agreement was made voluntary, non-legally binding and non-punitive to bypass the US senate. Contrary to what Trump said, the US has no mandatory commitments under the Paris Agreement.

• To ‘facilitate’ US participation, for the first time, almost all countries pledged emissions reduction, even when a majority of them had not contributed to climate change.

So, by and large, the Paris Agreement was for the US and by the US. Still the US walked away from it. This is a tight slap on the faces of the leaders of the remaining 194 countries who had agreed to the whims and fancies of the US to ensure its participation.

The US is historically the largest polluter of climate. It is responsible for one-fourth of the carbon stock in the atmosphere. It has one of the highest per capita emissions. It has already exhausted its ‘carbon budget’. Still, under Trump, the emissions of the US are likely to go up. This is bad news simply because without the US taking responsibility for reducing its share of emissions, the world cannot keep warming “well below 2°C”, which is the key objective of the Paris Agreement.

One of the unintended consequences of Trump’s decision is that it has unified the world in its support of climate change. This is an opportunity to strengthen the Paris Agreement. For this, the remaining 194 signatories will have to do the following:

1. Mollycoddling the US has not worked. So, they should not agree to renegotiate Paris Agreement to reduce the commitments of the US.

3. The rules of the Paris Agreement are being negotiated. These rules must be framed in a way that the agreement is made stronger and ambitious. This should include punitive measures, including economic and trade sanctions, to ensure that countries such as the US don’t walk away from their ‘fair and equitable’ responsibilities. Other countries must also step up their commitment to cut emissions.

The bottom line is, the US must be persuaded to join the Paris Agreement. And, when it joins, it must do so to fulfil its obligation based on fairness and equity, like every other country. After all, with 5 per cent of the world population, the US cannot be allowed to jeopardise the lives and livelihood of the remaining 95 per cent.

The writer is deputy director general, Centre for Science and Environment.