'Udanpirappe' review: An uneven drama with too many plots, no emotions

Jyotika's 50th film is about the bond between siblings 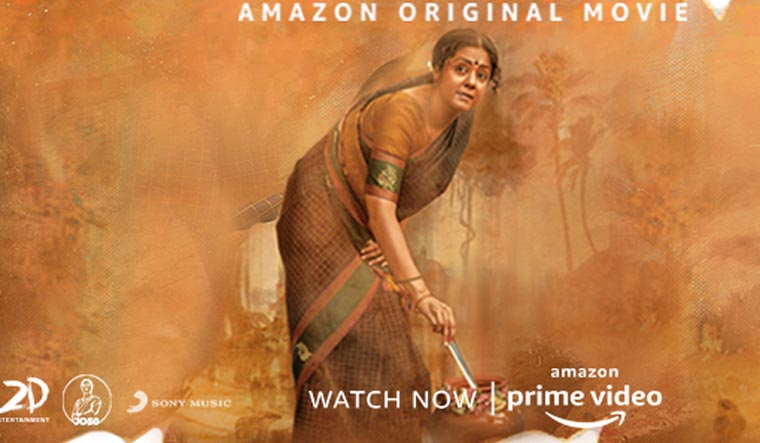 Tamil cinema is not new to stories talking about the bond between siblings.

Right from the days of legendary actors Sivaji Ganesan and Savitri in Paasamalar to director Bharathi Raja’s Kizhakku Seemaiyiley (starring Vijayakumar and Radhika) to the recent Kadaikutty Singham (starring Karthi) or Namma Veetu Pillai (starring Siva Karthikeyan), the love and affection shared by brother and sister have kindled emotions in the audience. Udanpirappe, Jyotika’s 50th film, as the name suggests is the bond between brother and sister, having all the family conflicts, sentiments, reunion and so forth.

The film is set in Vengaivasal, a small town in Pudukottai. As the film opens, three boys are seen chasing each other, while the first boy escapes, the second boy accidentally falls into a well and the third boy also jumps in to save him. What happens to them is unknown.

Then the characters of the film, Vairavan (played by Sasikumar) and Sargunam (played by Samuthirakkani) are introduced. And then as a temple priest laments that the main deity in the temple has gone missing, Mathangi (played by Jyotika) comes out of a slushy pond with the deity. The background music beats up high as she raises and walks out with the deity.

Mathangi and Vairavan are siblings. Mathangi’s husband, Sargunam, is a schoolteacher who is a law-abiding citizen. Vairavan, an influential person in the village, is a righteous but hot-headed person.

Mathangi plays a woman of a great standing, who hopes for reunion of two loved ones—her brother and husband—who are caught in an ideological battle. Why the two families got split and reunite is the plot of the story. But the plot has several sub-plots, with a poorly written screenplay. There are many dialogues that talk against the patriarchal societal system practices even in 2021.

For instance, Mathangi, all of a sudden, goes into a hospital only to save a woman who is admitted for childbirth and pawns her mangal sutra to pay the hospital bill. Then she says, thaali sentimentlam paakra nerama ithu. And in yet another scene, she is portrayed as a progressive woman, when she refuses to marry her daughter to her brother’s son, saying it is her wish. And when the village heads and relatives ask Vairavan to go for a second marriage because he doesn’t have children through his wife, he refuses.

But all these progressive statements are lost in the sub-plots, making them confusing and clumsy. The central plot, which is the bond shared between Jyotika and Sasikumar, gets lost as there is not enough punch to make the audience relate to the emotions. Again the reason for the two families falling apart is also not stressed upon as expected. A personal loss makes Sargunam walk away from his brother-in-law, which he believes happened because of Vairavan’s influence. The director fails to entertain the audience, when Vairavan walks into the betrothal scene to get his son engaged with Mathangi’s daughter. Here, Deepa Shankar’s dialogues and emotions fail to touch us. Then, Vairavan’s son Vivek, is yet another character who doesn’t carry any expression on his face.

Meanwhile, the audience will definitely have a question on why Samuthirakkani always plays the role of a teacher in most films. And the chemistry shared between Sargunam and Mathangi, as husband and wife, doesn’t impress you. And the brother-sister bonding too, doesn’t impress, as Jyotika’s action and voice do not go together. And the film, while it talks progressiveness, fails to talk about benevolence. The role played by actor Soori as Pakkadi is the one character who holds up the feudal mindset practised by the dominant family in the village. Pakkadi is the servant since his childhood days in the family and remains the same, even after 15 years, when the children in the family grow up and the two families look to reunite.

Udanpirappe is the second film rolled out by Suriya’s 2D entertainment, with Jyotika in the lead. This may be her 50th film and the passionate actor, after her comeback to Tamil cinema in recent years, has been attempting to do character and women-centric roles. But before doing Udanpirappe, both the director and Jyotika could have watched Radhika’s performance in Kizhakku Seemaiyiley to express how a sister, in a village, yearns to get reunited with her brother, despite her husband’s opposition.