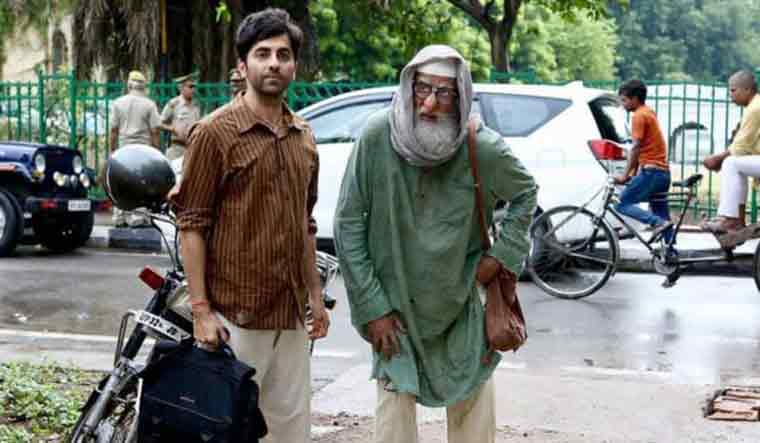 Early on in Gulabo Sitabo, a hunchbacked Mirza (Amitabh Bachchan) with a protruding nose is seen hankering for money. He steals the electric bulbs, bicycle bell and pickle jar from his own house, or rather the house he believes he owns, and from the people who inhabit this large mansion—Fatima Mahal—and pawns them for a pittance. The co-inhabitants of the mansion aren’t Mirza’s relatives, but tenants, five families, who have been in the house for so many years that their rents are meagre amounts that don’t go beyond Rs 30 to Rs 70.

The tenant paying the lowest rent is a young man, aggrieved with the realities of his life. Baankey (Ayushmann Khurrana), having lost his father at a tender age, is burdened with the responsibilities of his three younger sisters—the youngest in Class 3 and the eldest in her final year of graduation—and a widowed mother. The only source of income is from a humble flourmill he runs. Weighed down by life, his defences are always on; always ready to take on a fight. Here’s a young man who has turned bitter because of the circumstances in his life. The frustration shows in his body language, in the resentment he holds towards Mirza every time he is asked to pay the rent, which is almost always pending.

There is constant bickering and bantering between Baankey and Mirza for something that either of them has no claim over. It is Mirza’s wife, Fatima Begum (a sparkly Farrukh Jafar), 17 years older than him, who is the legal heir of the house. Unwell most of the time, it’s her zest for life that keeps her going. The love between the couple is almost lost, with Mirza’s one-dimensional approach to life. The only dream he has harboured is of owning the house. Fatima may need the help of a walker to move, but holds her own, never letting Mirza dominate and often asking him to stay away.

This is where things get interesting for this Shoojit Sircar-directed film, written by Juhi Chaturvedi (including screenplay and dialogue). It keeps its focus on a dilapidated old structure in Lucknow (the Nawabi city is epitomised in the film with utmost love), but often traverses finer nuances. In a delicate manner, it dissects the power balance in a marriage (Is it ever about the gender?). Chaturvedi triumphs in etching her female characters—from Fatima Begum to Guddo (Shristi Shrivastava), Baankey’s sister, who often ruptures his male high-handedness—who are never compromised or taken for granted in a film headlined by two male stars.

Gulabo Sitabo brings to the fore the age-old fight of ownership and responsibilities between landlords and tenants. In this case, there are too many claimants to the space and almost nobody readily available to take the responsibility of a structure wearing down with time. Things only get more complicated with Mirza involving a lawyer (Brijendra Kala as Christopher Clark) and Baankey giving in to a lucrative proposal by an Archaeological Survey of India official (Vijay Raaz as Gyanesh Mishra). They both manoeuvre their own plans, often misleading the two men in the thick of things. With Clark and Mishra, there is a sly commentary on the existent system, the capitalistic society that cares for nobody and is often manipulative in nature.

But that is where Gulabo Sitabo loses the plot a bit. It packs in so much that it is difficult to figure out what’s the point it is trying to make, or is it trying to make a point at all. It seems a bit of a stretch and a slight distraction. But Chaturvedi’s whimsical characters and stunning visuals (by cinematographer Avik Mukhopadhyay) clubbed with Shantanu Moitra’s music that mounts on the folk flavour, it’s difficult to lose attention.

In an interview with THE WEEK earlier, Sircar promised, “one would have a smile on their face throughout the film”. He wasn’t wrong. But then, he also evokes many emotions. The moving shots of the desolate mansion towards the end of the film bring a lump in the throat. And then, as it closes, there is this realisation how nothing lasts—neither the youthfulness nor the material possessions. It’s the people who do, and it’s a bad idea to lose them to greed.