Kirby's response to the reporter did not explicitly mention India 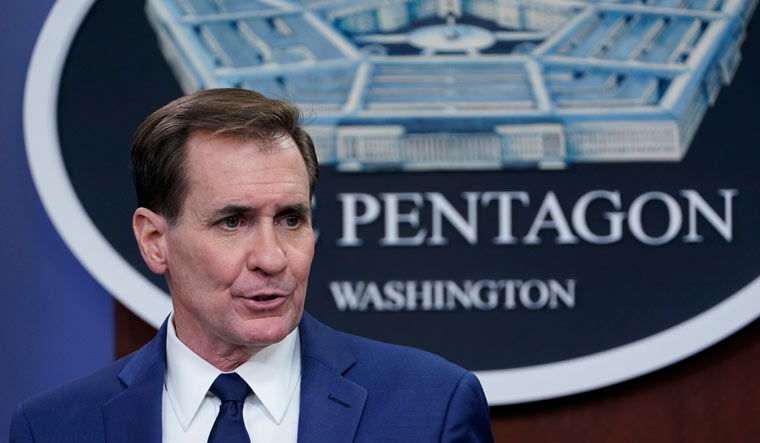 Hours after India's ministry of external affairs announced that it had conveyed concerns to the US over a US Navy warship entering India's exclusive economic zone (EEZ), the Pentagon was questioned about the incident.

The MEA statement came after the US Navy's 7th Fleet announced that the USS John Paul Jones, a destroyer, had passed through an EEZ in the Lakshadweep Islands without seeking India's consent.

#Breaking: #Pentagon Press Sec John Kirby in resp to a question on #USNavy ship #USSJohnPaulJones in #Indian #EEZ says it was an "innocent passage" that was normal operation "consistent with international law" & part of "responsibility to uphold freedom of navigation" #India #USA pic.twitter.com/VDFs6Mx1Vc

At a briefing on Friday, Pentagon chief spokesman John Kirby was asked about the incident by a Bloomberg reporter. The reporter asked Kirby whether the Pentagon believed the "destroyer was within its rights in the EEZ... do you have any message for India?" The questions and Kirby's response can be seen from 4.5 minutes on a video uploaded by PBS.

Although the reporter mentioned India's foreign ministry and India, Kirby's response to the reporter did not explicitly mention India. Apparently reading from a prepared text, Kirby said, "What I can tell you is that the USS John Paul Jones... asserted navigational rights and freedoms in the vicinity of the Republic of the Maldives by conducting innocent passage through its territorial sea in normal operations within its exclusive economic zone without requesting prior permission."

When another reporter sought clarity on the "US reaction to India's concerns", Kirby said, "I won't speak to specific communication with India on this" and reiterated the reference to the Maldives. Kirby noted that such navigation mission were not "against a nation-state," but "for a principal".

On the same day as the passage through the EEZ in Lakshadweep, the John Paul Jones had undertaken the same exercise in the "vicinity of the Republic of the Maldives". The 7th Fleet issued similarly worded releases for both incidents. Kirby's response appeared similar to the 7th Fleet statement issued for the Maldives incident.

That 7th Fleet statement said, “USS John Paul Jones (DDG 53) asserted navigational rights and freedoms in the vicinity of the Republic of the Maldives by conducting innocent passage through its territorial sea and normal operations within its exclusive economic zone without requesting prior permission, consistent with international law.”