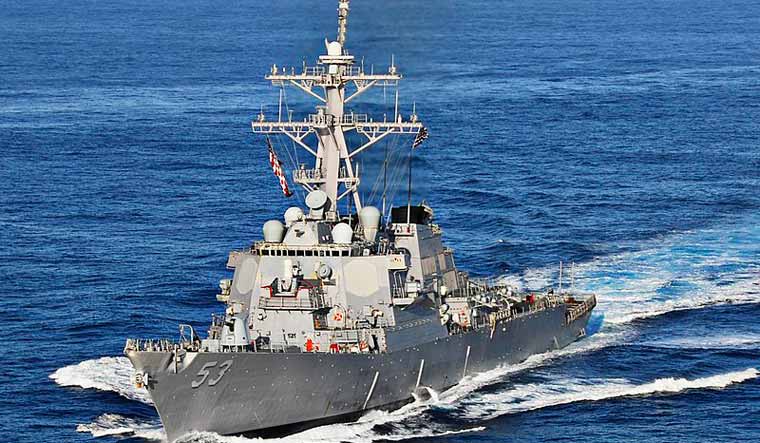 In a surprising move, the US Navy's 7th Fleet announced that one of its warships conducted a 'freedom of navigation' operation near the Lakshadweep Islands on Wednesday without requesting India's prior consent.

The 7th Fleet is headquartered in Japan. In a statement issued on April 7, the 7th Fleet stated the warship, USS John Paul Jones, "asserted navigational rights and freedoms approximately 130 nautical miles west of the Lakshadweep Islands, inside India’s exclusive economic zone, without requesting India’s prior consent, consistent with international law. India requires prior consent for military exercises or manoeuvres in its exclusive economic zone or continental shelf, a claim inconsistent with international law. This freedom of navigation operation (FONOP) upheld the rights, freedoms, and lawful uses of the sea recognised in international law by challenging India’s excessive maritime claims".

Interestingly, the USS John Paul Jones undertook a freedom of navigation operation in the vicinity of the Maldives on the same day. The Maldives lie about 717km from Lakshadweep.

The US Navy and its allies such as Australia have made numerous navigation exercises in disputed areas of the South China Sea claimed by China in recent years. NATO member states have also conducted similar exercises in the Black Sea and near Crimea to send a message to Russia.

The 7th Fleet press release claimed the US Navy conducts “routine and regular Freedom of Navigation Operations (FONOPs), as we have done in the past and will continue to in the future. FONOPs are not about one country, nor are they about making political statements."

A US Navy document on freedom of navigation operations in the South China Sea claimed, "The United States challenges excessive maritime claims around the world regardless of the identity of the claimant. The international law of the sea as reflected in the 1982 Law of the Sea Convention provides for certain rights and freedoms and other lawful uses of the sea to all nations."

Not surprisingly, the US Navy statement has caused a stir in India. Former Indian Navy chief admiral Arun Prakash termed the 7th Fleet statement as ironic.

Prakash tweeted, "There is irony here. While India ratified UN Law of the Seas in 1995, the US has failed to do it so far. For the 7th Fleet to carry out FoN missions in Indian EEZ in violation of our domestic law is bad enough. But publicising it? USN please switch on IFF!" Prakash was referring to the interrogation-friend or foe system, which is used by warships and aircraft to identify and communicate with friendly forces.

Prakash also wondered about what was the "message for India" from the exercise. "FoN ops by USN ships (ineffective as they may be) in South China Sea, are meant to convey a message to China that the putative EEZ around the artificial SCS islands is an “excessive maritime claim.” But what is the 7th Fleet message for India?" Prakash tweeted.