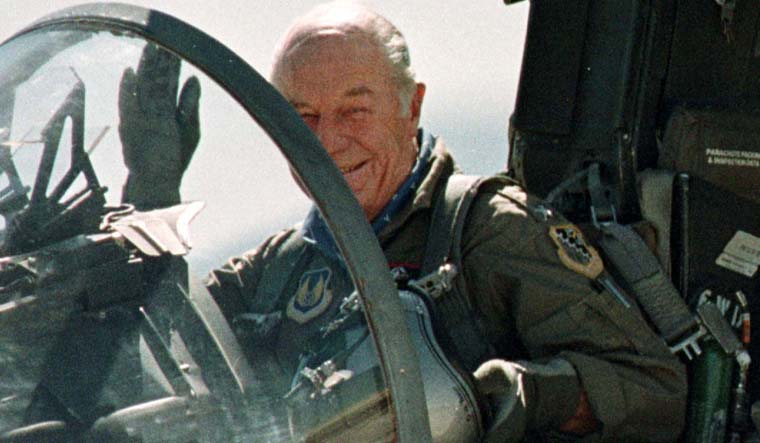 Chuck Yeager, an icon of aviation history, has died at the age of 97, his family informed on Monday night. Yeager, an ace of the Second World War who shot down 13 German fighter aircraft, was the first man to fly over the speed of sound. Yeager flew the first supersonic flight in 1947.

Chuck Yeager's wife, Victoria Yeager, informed on his official Twitter handle," It is w/ profound sorrow, I must tell you that my life love General Chuck Yeager passed just before 9pm ET. An incredible life well lived, America’s greatest Pilot, & a legacy of strength, adventure, & patriotism will be remembered forever."

Yeager was born in West Virginia in 1923 and enlisted in the US Army Air Corps (later US Air Force) in September 1941.

A US Air Force biography of Yeager notes, "During World War II, General Yeager distinguished himself in aerial combat over France and Germany during the years 1943-1945 by shooting down 13 enemy aircraft, five on one mission, including one of Germany's first jet fighters. On March 5, 1944, he was shot down over German-occupied France but escaped capture when elements of the French Maquis helped him to reach the safety of the Spanish border."

Though a senior officer of the US Air Force during the Vietnam War, Yeager flew 127 missions during the conflict in the South-East Asian nation in 1966.

Following the supersonic flight, Chuck Yeager achieved legendary status even as he continued in US Air Force service until 1975 when he retired with rank of brigadier-general. Yeager was even one of the subjects of a book, The Right Stuff, which was later made into a movie in 1983.

Yeager was head of the US military assistance mission in Pakistan during the 1971 war. During the war, an Indian Air Force mission to strike the Pakistani base of Chaklala destroyed a small passenger aircraft that was assigned by the Pentagon to Yeager. The incident left Yeager bitter and critical of the Indian action for decades.

Yeager continued to insist on Twitter for years Pakistan had won the 1971 war and Pakistan Air Force pilots were better than Indian ones.

The pilot who destroyed Yeager's plane was retired Indian Navy chief admiral Arun Prakash. Prakash was then an exchange pilot with the Indian Air Force.

Prakash paid tribute to Yeager on Twitter, stating, “A WW II fighter ace, Vietnam veteran & superb test pilot, ‘Chuck’ Yeager’s name will be up there in the aviation Hall of Fame forever. His stubborn pro-PAF bias, has to be seen in light of his appointment as Military Adviser in US Embassy, Islamabad, during the 1971 war.”