1971 war: How an Indian Navy pilot made America’s ‘supersonic man’ mad at Indira 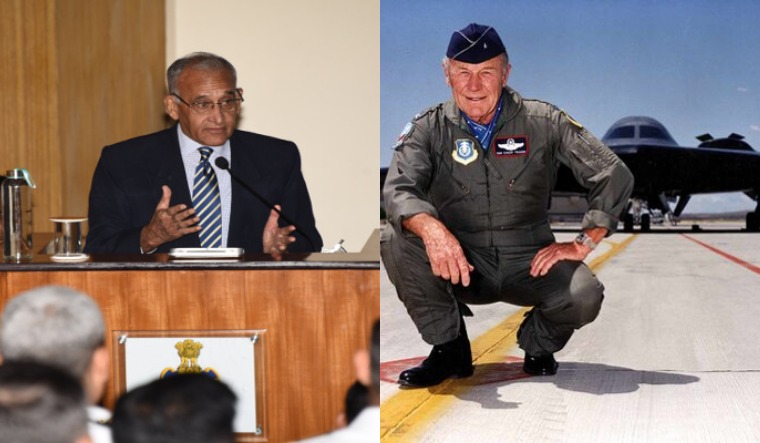 For followers of aviation history, the name Chuck Yeager evokes as much awe as Sachin Tendulkar does for cricket buffs or Elon Musk for EV enthusiasts. Yeager, a US fighter pilot, was an ace of the Second World War, shooting down 13 German aircraft. Yeager then went on to become the first man to fly over the speed of sound, when he flew the experimental Bell X-1 aircraft in October 1947. Yeager continued in service in the US Air Force until 1975. Yeager even flew combat missions over Vietnam during the early phase of the war in that country.

A star of TV commercials and the subject of books and even a movie, Yeager remains a 'living legend'. Yeager has an interesting connection to the 1971 India-Pakistan war… a connection that involves an Indian pilot, who would rise to become chief of the Indian Navy.

Yeager was deputed by the US Air Force in 1971 to head the US Military Advisory Group in Pakistan, which aimed to train Islamabad's military and account for US equipment sold there.

Arun Prakash, who took over as chief of the Indian Navy in 2004, was at the time of the 1971 war an exchange pilot with the Indian Air Force. Prakash was flying the British-supplied Hawker Hunter strike aircraft. A Pakistan Air Force attack on Indian airbases on December 3, 1971, had led to the start of war. On the next day, Prakash and his unit were tasked with attacking the Pakistan Air Force base at Chaklala, near Islamabad. Writing in Vayu Aerospace Magazine in 2007, Prakash said he fired the Hunter's guns on a C-130 Hercules transport aircraft and a "light aircraft" at the airbase. The C-130 was a UN aircraft.

It turned out that the light aircraft, a Beechcraft passenger plane, was assigned for Yeager by the Pentagon. The incident was described in an article in The Washington Monthly in October 1985, titled The Right Stuff In the Wrong Place, by Edward C. Ingraham. Ingraham was a US diplomat in Pakistan at the time.

Right Stuff was the name of a book on legendary test pilots, including Yeager, which was made into a movie of the same name in 1983.

The Beechcraft was assigned by the Pentagon to Yeager "to help keep track of the occasional pieces of American military equipment that sporadically showed up in the country," The Washington Monthly said. Following the incident, Yeager became furious. Ingraham wrote, "His [Yeager’s] voice resounding through the embassy, he proclaimed that the Indian pilot not only knew exactly what he was doing but had been specifically instructed by [Indian prime minister] Indira Gandhi to blast Yeager’s plane". "Yeager informed me that anyone dumb enough not to know a deliberate attack on the American flag when he saw one had no business wearing his country’s uniform," Ingraham wrote.

While Yeager kept a low profile for the rest of the 1971 war, he interrogated Indian pilots who had been shot down. Ingraham claimed there was speculation Yeager played a more active role in helping Pakistan. "A Pakistani businessman, son of a senior general, told me excitedly that Yeager had moved into the big air force base at Peshawar and was personally directing the grateful Pakistanis in deploying their fighter squadrons against the Indians. Another swore that he had seen Yeager emerge from a just-landed jet fighter at the Peshawar base," Ingraham wrote.

However, M. Kaiser Tufail, a retired Pakistan Air Force commodore and a strategic analyst, downplays Yeager's role in the 1971 war. In response to a column by Prakash in The Print in 2018, Tufail wrote,

"About Chuck Yeager, all I have to say is that he was a big mouth and a braggart… All he did was to fly a couple of sorties on the Sabre in Peshawar, due to his friendship with Air Mshl Rahim, both having a penchant for hunting and fine Scotch.”

It appeared decades later, Yeager could not forget the destruction of his aircraft in 1971. Yeager has repeatedly tweeted that Pakistan won the 1971 war as India did not annex it. He even claimed the Beechcraft had been used to rescue Indian pilots who had been shot down.

Q: What did u think of Pakistan pilots? A: When I was there in 1971-73, they were the best. They kicked the Indians butt!

Yeager has been an admirer of Pakistani pilots. In 2015, he tweeted in response to a query, “When I was there in 1971-73, they were the best. They kicked the Indians butt!”