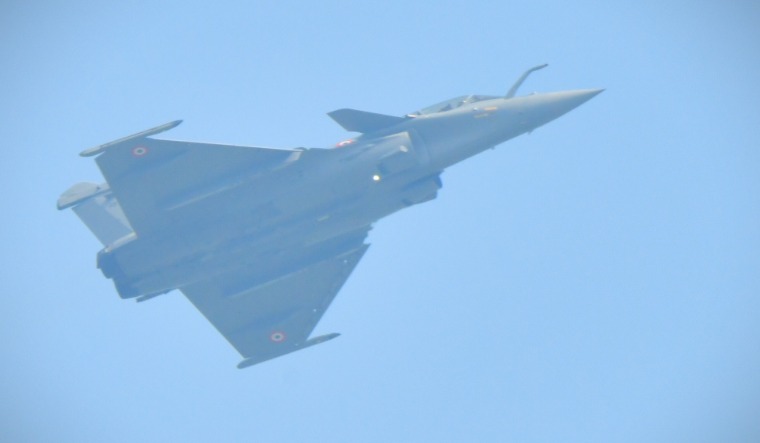 Defence Minister Rajnath Singh touted the 'game-changing' capabilities of the Rafale as he spoke at the formal induction of the French fighter into the Indian Air Force at Ambala on Thursday. Singh and his French counterpart, Florence Parly, highlighted the Rafale's capabilities and its combat record.

However, a noted Pakistani strategic commentator, who is also a retired fighter pilot, has argued the "immediate impact" of the Rafale on the Indian Air Force's capabilities is "simply over-hyped".

Writing in Pakistan Politico, a Pakistani magazine, Tufail noted, "the inadequacy of IAF’s Su-30MKI and MiG-29 twin-engine fighters in the air superiority role led to the decision to acquire the Rafale, ostensibly a more modern and capable multi-role fighter". Both the Su-30MKI and MiG-29 are Russian-designed fighters.

The Su-30MKI is numerically the most important aircraft in the Indian Air Force, with over 250 units in service, while the MiG-29 has undergone an upgrade to give it enhanced multirole capabilities. The Indian Air Force operates over 60 MiG-29 fighters.

Tufail acknowledged both the Su-30MKI and MiG-29 were "highly manoeuvrable in a visual dogfight", but "they seem to have shortcomings in network-centric, beyond-visual-range (BVR) combat". Tufail alleged the Su-30MKI jets that participated in the aerial skirmish with Pakistan Air Force jets over Jammu and Kashmir in February 2019 lacked datalinks to exchange information securely and their radars were unable to lock on to "two dozen PAF fighters". The Indian Air Force had stated Pakistani F-16 fighters fired AMRAAM air-to-air missiles in the skirmish.

"While a definitive conclusion about the shortcomings of the Su-30 fire-control radar and missiles cannot be made on the basis of a single engagement, it is clear that they are not at par with the PAF F-16/AMRAAM combo," Tufail wrote in Pakistan Politico. “The IAF was aware of these limitations of the Russian fighters, which is why it had initiated measures for the acquisition of Western multi-role combat aircraft instead of more Su-30s, as far back as 2012,” Tufail wrote.

Tufail noted the Rafale, JF-17 and F-16 had comparable performance in a turning dogfight, where the aircraft's capability to turn quickly is a decisive factor.

A key capability that the Rafale brings to the Indian Air Force is the Meteor long-range air-to-air missile, which has a range in excess of 150km. The Meteor uses a 'ramjet' engine, allowing it to have powered flight to the point of impact, unlike earlier air-to-air missiles that rely on rocket engines, which only burn for specific period. The ramjet engine gives the Meteor a significantly higher 'no escape zone', the zone in which a target aircraft cannot use manoeuvrability or speed to evade a missile strike.

Tufail noted the Pakistan Air Force was set to acquire the Chinese-made PL-15 air-to-air missile for its JF-17 fighters. Experts have estimated the PL-15, which is significantly longer than the Meteor, has a range in excess of 200km. US officials have cited the development of the PL-15 as an argument for the US military to have a new long-range air-to-air missile.

Tufail argued, " It must… be remembered that it will be at least two years before the Rafale achieves anything close to full operational capability." He claimed the Pakistan Air Force has operated the F-16 for 37 years and the JF-17 for a decade. "These combat-proven PAF fighters are fully integrated with the air defence system, and are mutually data-linked, alongside all AEW (airborne early warning) and ground sensors.  Such capabilities are not achieved overnight, and it will be several years before the Rafales can be considered a threat in any real sense. Any immediate impact of the Rafale on IAF’s air power capabilities is, thus, simply over-hyped."