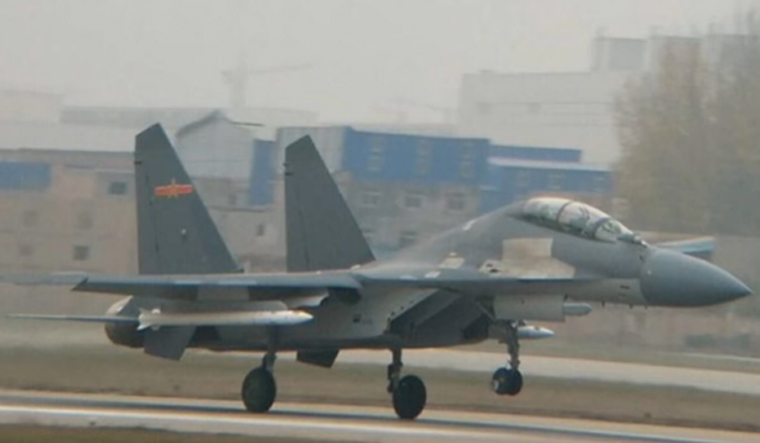 The Global Times reported that footage of the PL-15 missile being carried on the J-11B had been shown on China Central Television.

The PL-15 missile, which is a radar-guided weapon, is touted as having a greater range than contemporary systems like the US-built AMRAAM, used in the recent India-Pakistan skirmishes, and the Russian R-77, which is in service with the Indian Air Force. The AIM-120D variant of the AMRAAM is thought to have range of about 100 miles (approximately 160km).

According to a report published by the International Institute for Strategic Studies in early 2018, the PL-15 “would be the most capable air-to-air missile in the PLAAF inventory.”

Multiple images of the PL-15 have circulated since 2015 even as the Chinese government and media have kept silence about the project. The PL-15 missile came into prominence in 2015 when Herbert J. Carlisle, the then head of the US Air Force’s combat command, spoke about the weapon at an event in Washington. Carlisle was quoted by Flight International as saying outmatching the PL-15 missile was an “exceedingly high priority” for the US Air Force.

While precise figures are unavailable, experts have estimated the PL-15 missile to have a range in excess of 200km. In early 2017, Chinese media reported about the test of an unnamed air-to-air missile, with a range of up to 400km, with the weapon’s description matching the PL-15. In July 2017, Aviation International News reported the PL-15 missile had been test-fired in September 2015.

With a length of over 4metres, the PL-15 is significantly longer than the AMRAAM and has a powerful radar and rocket motor. Military experts in China and overseas claim the primary role of the PL-15 may be to destroy ‘high-value’ targets such as airborne early-warning aircraft and aerial refuelling aircraft, which could decisively handicap adversaries such as the US in a conflict in the Pacific.

The PL-15 uses a conventional rocket motor, unlike the European-origin MBDA Meteor missile, which will arm the Indian Air Force’s fleet of Rafale fighters. The Meteor uses an air-breathing ramjet motor and has greater manoeuvrability as it approaches a target when compared with rocket-propelled missiles. The Meteor has a stated range of "well in excess of 100km" according to its manufacturers, but is also smaller in length than the PL-15. Therefore, China watchers have argued the PL-15 may have greater range than the Meteor on account of its higher fuel capacity.

The Global Times report stated the PL-15 missile had been deployed on China’s J-20 stealth fighter, the single-engine J-10 and the J-16 fighter-bomber, which is derived from Russian SU-27, also the basis for the Indian Air Force’s SU-30MKI.

Global Times quoted a military expert as saying the deployment of the PL-15 on the J-11B fighter showed “the technology of the PL-15 has matured, so it can now be put on a variety of platforms”. The J-11B is a Chinese-built variant of the SU-27 and the People’s Liberation Army Air Force is thought to operate over 200 of these fighters.