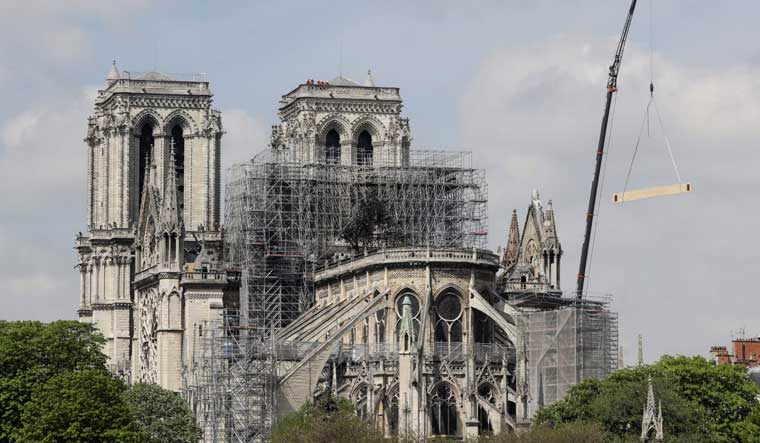 Fire fighters at work on top of a tower of Notre-Dame Cathedral, as a crane lifts up construction material | AFP

Generous donations have been pouring in from various people, including billionaires and magnates, around the world to rebuild the Notre-Dame Cathedral, which was partially destroyed after a massive fire tore through the structure on Monday. It is estimated that nearly USD 1 billion has already been raised for the cause.

Multi-million dollar companies including Apple, Chanel, Dior and L'Oreal have come forward with generous donations besides parishioners and ordinary worshippers. Since the fire, over USD 990 million has been raised, as per presidential cultural heritage envoy Stephane Bern.

Billionaire Bernard Arnault and his LVMH luxury conglomerate also pledged the same amount to the restoration of the 850-year-old Gothic landmark.

French President Emmanuel Macron has set a deadline of five years to complete the restoration of the Notre-Dame Cathedral. However, the deadline has struck many as unrealistic. It is estimated that it could take 2-5 years just to secure the cathedral. Moreover, the 2024 Olympics is scheduled to be held in Paris and is expected to be made into a major showcase.

France also said that it would invite architects from around the world to submit designs for replacing the spire of Notre-Dame cathedral.

Firefighters are reportedly still examining the extent of the damage after the fire collapsed the spire and the roof of the 850-year-old structure. No casualties have been reported in the fire after firefighters and church officials evacuated people from the cathedral.

Investigators said the cause of the accident may have been an accident related to the renovation work that the UNESCO world heritage landmark was undergoing.