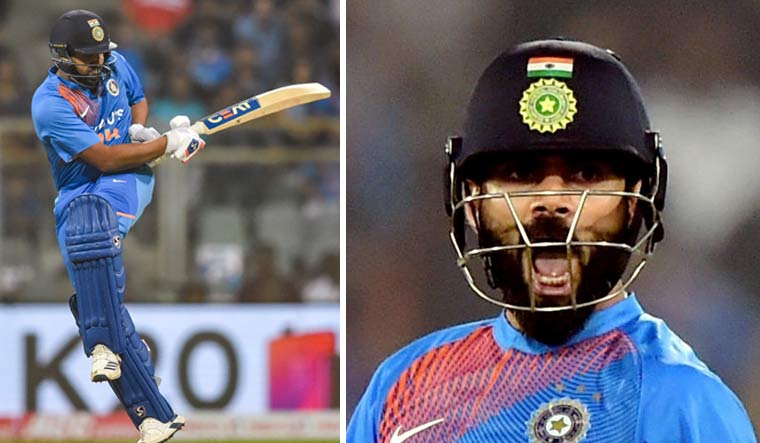 It was an innings of records for Indian batsman on Wednesday, as Rohit Sharma achieved his 400th international six, Virat Kohli smashed his 1,000th T20I run at home and K.L. Rahul along with Sharma set India's best first-wicket stand against West Indies in T20Is with a partnership of 135 runs in nearly 12 overs.

Making up for their uninspired performance on Monday, the Indian batsmen hit 19 fours and 16 sixes to set West Indies a target of 241 at the Wankhede Stadium in Mumbai.

India finished their innings at 240-3 with Rahul stopping short of a century at 91 runs and Kohli reaching 70 off 29 runs. If West Indies manage to beat this score, it will be the highest successful chase at Wankhede in T20Is.

Rishabh Pant fell for a duck soon after Sharma got out, prompting captain Kohli to step onto the crease. Within an over, Kohli knocked the ball into the boundary and became the first Indian cricketer to score 1,000 runs in T20Is played at home.

Rohit Sharma hit 71 off 34 balls, with six 4s and five 6s, putting India on track to set a tough target for West Indies to chase as the home team made good use of the batting-friendly pitch.

For Kohli, this is the latest in a string of records: The fastest batsman to score 10,000 runs in ODI, the most number of double centuries as a Test captain, the first cricketer to score 20,000 international runs in a decade, the most successful captain India has ever had.

Kohli is the world’s number one batsman in the ICC rankings in both Test and ODIs (as well as the first Indian to have a rating of above 890 points in Tests).

He is now just the third batsman internationally to achieve this feat, after New Zealand’s Martin Guptill and Colin Munro.

India and West Indies play a crucial decider match today at the legendary Wankhede Stadium in Mumbai, with the series level at 1-1 after West Indies made a strong comeback in the second T20I against a lacklustre Indian batting performance.

Kohli shined in the first game as his frustration from scoring no runs in the first half of the game converted into an anger that makes him a batsman to be feared, hitting 94 off 50 balls. The first T20 was marked by the intense staredowns between the captains of both sides, as Kieron Pollard tried desperately for Kohli’s wicket.

In the second T20I against West Indies, however, Kohli managed only 19 runs.

Pollard, too, will be eyeing records in today’s match. He is ten runs shy of crossing the 1,000-run-mark in T20Is (a feat achieved by four Windies batsmen before him). In addition, he is 56 runs shy of becoming the second-highest run-getter in T20s overall, taking the second spot from Brendon McCullum.

The number-one position for runs scored in T20s is held by ‘Universe Boss’ Chris Gayle, with 13,152 runs.