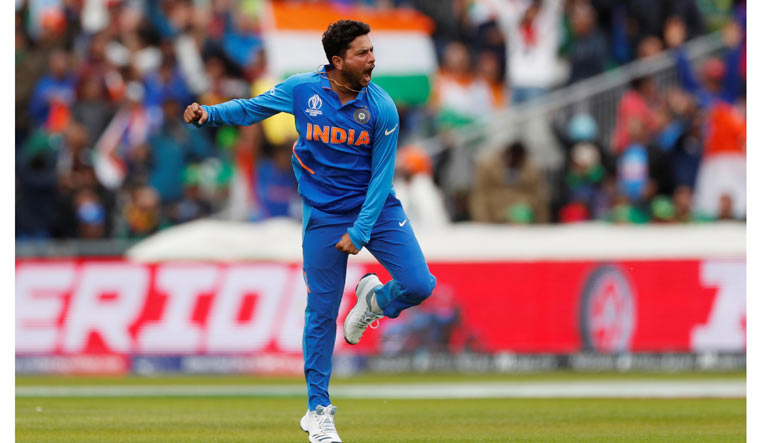 Kuldeep Yadav couldn’t restrain himself after his delivery to Babar Azam bamboozled the Pakistan batsman. The pump of the fists said it all. He followed it up with the wicket of another set batsman Fakhar Zaman. The ball was tossed up, flighted and ended up in the hands of Yuzvendra Chahal at short fine leg. Kuldeep had struck at the heart of the Pakistan batting lineup, getting its two main top order batsmen. Pakistan, chasing a massive 336 to win, had slipped to 126/3. Kuldeep’s double strike opened the floodgates as all-rounder Hardik Pandya then got into the act―ripping out the Pakistan middle order with the wickets of Mohammed Hafeez and Shoaib Malik in the space of two balls. India had Pakistan on the mat, the rain worsening their misery.

The 24-year-old wrist spinner from Kanpur had finally joined in on India’s World Cup party. His bowling figures before the match against Pakistan were 1-46 and 0-55 in the games against South Africa and Australia respectively. In both the matches, it was his bowling partner Yuzvendra Chahal who was more successful. Kuldeep, India’s mystery spinner, was getting there but wasn’t quite there yet.

Kuldeep had joy written over his face after the match. He said the wicket of Babar Azam was a perfect delivery for him. “That was a really good wicket―they were playing very well and rotating strike well too. That wicket was very crucial. It drifted and turned; any spinner would like that delivery, a proper spinning delivery, a Test delivery; deceiving the batsmen in air and forcing them to make a mistake.” He went back to the dressing room during the rain break and watched his delivery to Azam again.

India vice-captain Rohit Sharma said that Kuldeep is a bowler who has to be given a lot of confidence; the entire team was talking to him, reaffirming its faith in him.

“Kuldeep is someone who needs a lot of confidence before going into his spell. So as a team, we’ve been talking about him, how big a match-winner he’s been for us in the last year or so. He’s probably [played] 48 games and almost 90 wickets... That is almost two wickets per game. That’s a hell of a record for a spinner, and most of the wickets have come out of the sub-continent for him.

“He’s our match-winning bowler in that middle-over phase, and today also you saw how important those crucial wickets were. Both the batsmen were set.” 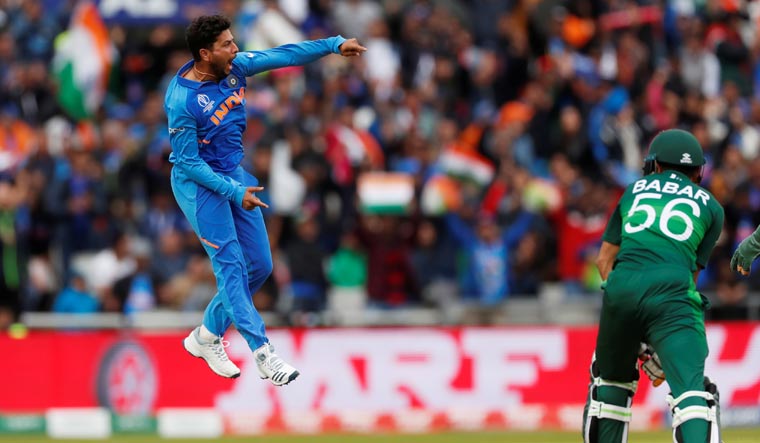 He was coming off a horrid Indian Premier League, in which he tasted little success, and being left out of the playing eleven in four matches. The gap between the IPL and the team’s departure for the World Cup was spent with his personal coach Kapil Dev Pandey during which Kuldeep trained with his academy mates. For coach Pandey, it was just about going back to basics and rediscovering his strengths.

“These things happen. I tried to make sure he did not sit and ponder over what happened in the IPL too much. I told him you have always bowled to take wickets not to be defensive. Your strength is to give flight, stick to your line and lengths, and that is what we trained for in our own nets. In the IPL, you have flat wickets and the pressure is always on the bowler so one should not take it to heart.” Free time between training at home was spent on listening to music, talking cricket and mentally relaxing going into the World Cup.

The efforts of Kuldeep’s coaches, teammates and his own to get back to taking important wickets have paid dividends in the match that generated the most pressure for India. “I never thought I lost my rhythm. It happens sometimes when you don’t pick wickets. I felt [in the] last three games, I was bowling really well. Against Australia―their batsmen were struggling to hit me. When that happens that shows a bowler is in his rhythm. In this game, too, rotation of ball and the deceiving batsmen in air is most important for any skipper and that’s what I loved. It’s my strength.”

This shows clearly that India’s ‘X’ factor has finally found his mojo. Going into the second part of the league phase, where India will be meeting teams such as England and West Indies always wary against spin, this is good news. Sitting in Kanpur, coach Kapil Dev Pandey, watching his ward putting all the lessons he learned before World Cup into practice, will be mighty pleased.