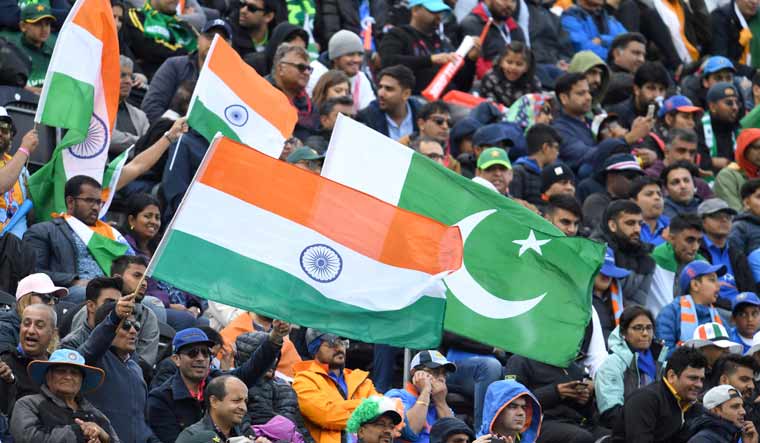 Pakistani batting legend Javed Miandad jumping up and down mocking Indian wicketkeeper Kiran More’s enthusiastic appealing in the 1992 World Cup match at Sydney; the duel between Pakistani opener Aamir Sohail and Indian pacer Venkatesh Prasad in the 1996 match in Bengaluru; Sachin Tendulkar’s six over point off Shoaib Akhtar’s express fast delivery.... Fans from India and Pakistan have lived and loved these unforgettable incidents which have spiced up India-Pakistan World Cup matches. They hang on to these memories, in hope of fresh ones at the epic face-off every four years at the biggest stage.

Indian fans easily outnumbered Pakistani supporters. The lines were drawn the moment they entered the trams and buses leading towards the Old Trafford on June 16. Music was playing loudly outside the stadium. The local man selling India and Pakistan flags made some quick bucks. The stage was set.

Yet, Sunday’s clash between the traditional rivals turned out to be a dud. What the 30,000 lucky fans, of the 7,00,000 who had applied for it, got was a one-sided affair. There was a 'yawning' gap between the men in blue and the men in green. Indians were athletic and sharp on the field; Pakistanis were anything but that. India won without any fuss, making it 7-0 in their favour in World Cup encounters so far.

Never once did it look like there will be verbal jousting. Maybe, a face-off between Mohammad Amir and Rohit Sharma. Or some reaction from Indian skipper Virat Kohli, who is always a live wire on field, reacting to everything that goes on in the middle. Nothing. Pakistan were a miserable sight. Even rain wouldn’t end their misery soon enough.

When Pakistan skipper Sarfaraz Ahmed was asked whether the fierce on-field rivalry between the two things was a thing of past, he simply said India are a far better team. “I think it's a special game. India handled [the pressure] well, that's why they won today. And previously too. No, I don't think it (rivalry) is dead. If you see in '90s, Pakistan was up ahead, but definitely at the moment, Indian team is better than Pakistan. That's why they win more matches.”

When asked about the rivalry, India vice-captain Rohit Sharma said, “Whenever we play against each other, it's always been like that. I don't know what it seems from the outside, but we are playing the game against another opposition. For us, it's pretty simple. We are here to win the game, not look at the opposition. Whether it's Australia, South Africa, England, or Pakistan, for us, it doesn't matter. We are here on a mission, and our focus is to make sure that we accomplish that mission. All the outside talk will keep happening, but for us, it's just to focus on the job at hand and make sure we get the job done at the end of the day."

With no bilateral cricket between the two countries but an occasional run-in during an ICC event or Asia Cup, the current Indian and Pakistani players barely have any bonding between them. Players of these two teams don’t even play in same Twenty20 cricket leagues. Indian cricket has moved ahead by leaps and bounds; Pakistan has no international cricket at home. Their domestic cricket is suffering.

In the past, the teams would still play each other at neutral venues. Players shared a common language, and interests in food, movies and music. Those were times when Imran Khan would fondly talk about Sunil Gavaskar; Wasim Akram and Ravi Shastri would spend time together off the field, Shahid Afridi would chat with Harbhajan Singh and Yuvraj Singh in team hotels. There is an obvious lack of deep friendship between the players of the two sides. Virat Kohli and company have a lifestyle very different from that of the current Pakistani players. There appears to be no common ground between the players of the respective teams. The gap there too, as in their cricket, is sadly too wide.