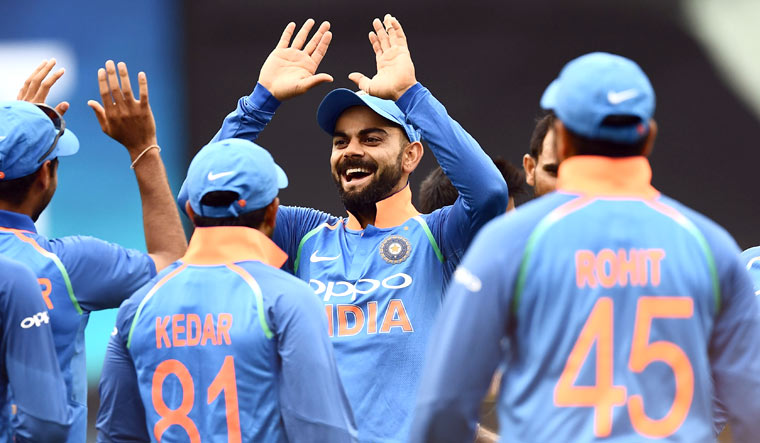 His manic consistency has already put him among the pantheon of greats but the World Cup in England will be Virat Kohli's hour of reckoning in his bid to create a lasting legacy as India's captain.

The first Indian captain to win a Test series on Australian soil, Kohli will be leading a team which has its own share of worries but is not short of game-changers, a must in a big ticket tournament.

Who bats at No 4? Is Kedar Jadhav good enough? Third pacer or an extra all-rounder? Kuldeep or Chahal or both? The World Cup will be much about Kohli, the captain as much as it is about Kohli, the batsman.

A World Cup victory will put Kohli in a league of his own and even those sceptical about his tactical nous, will have no other option but to grudgingly doff their hats at his heady achievements.

Without doubt, the Indian captain will hold the key during the seven-week period where he is expected to cross 11,000 runs and also add a few more hundreds to the 41 he has already has in his kitty.

With the pitches expected to be as flat as pancakes, Rohit Sharma's flamboyance may fetch him a few 'Daddy Hundreds', may be even a fourth double, if the vice-captain gets going.

And then there is Shikhar Dhawan, who has never put a foot wrong at the ICC events since his international debut and would like the record to remain unblemished.

The trouble starts after this point, something that Men In Blue have not exactly been able to paper over despite fabulous show from the top three on more occasions.

The number four slot has been a topic of discussion after Ambati Rayudu failed to inspire confidence and the maverick Rishabh Pant was left out of the squad defying logic.

Even the explanations given by the chairman of selectors MSK Prasad and skipper Kohli about Dinesh Karthik's experience under pressure wasn't a convincing enough reason.

Save his 8-ball-29 in the Nidahas T20 final against Bangladesh, Karthik in his stop-start 14-year international career has hardly done anything worth remembering.

Vijay Shankar, the man termed as the 'Three Dimensional' cricketer by Prasad or specialist opener K.L. Rahul could be the 'square peg in a round hole'.

ALSO READ: Why Rayudu and Pant failed to make it to India's World Cup team

Whoever is the choice, it will be more of an inspirational one rather than having any method to the madness as the 'Mad Max' Pant waits in the wings.

Mahendra Singh Dhoni's final World Cup campaign will be an emotional one for his legion of fans but a strike-rate in 70s and inability to force the pace on a consistent basis between 35th and 50th over will keep opposition teams interested.

During the IPL, Dhoni is known to target the young Indian bowlers during the death overs, using all his expertise, something he might find difficult against a Kagiso Rabada or a Pat Cummins or a Mohammed Aamir.

At No. 6 comes Kedar Jadhav, hopefully fit by the time India take on South Africa at Southampton on June 5.

The cheeky player that he is, Jadhav's below-par show in 14 IPL games is a cause of concern. At CSK, despite playing on conducive Chennai tracks, Jadhav wasn't bowled—partially due to his dodgy hamstring and partly due to success of Harbhajan Singh and Imran Tahir.

Hardik Pandya's multi-dimensional talent at No. 7 is expected to be put to good use during the tournament. His ability to produce big sixes at the death can change complexion of the game.

The Indian team management and the selectors in the past two years, invested heavily in wrist-spinners Kuldeep Yadav and Yuzvendra Chahal, who have got decent amount of success.

But the Australians during their last ODI series in India, were able to successfully decode the duo with Usman Khawaja and Aaron Finch showing the way in Ranchi while young Ashton Turner (not in the World Cup squad) followed suit in Mohali.

Kuldeep's poor IPL form has been an insult to the injury as he was the only World Cup-bound India player, who lost his place in an IPL playing XI due to poor form.

But there is Jasprit Bumrah, who in coming years, will perhaps be one of India's greatest match-winners.

Mohammed Shami's swing up-front and Bumrah's yorkers at the death make it a heady cocktail.

Out of nine league games, winning six could prove to be good enough to qualify for the semifinals for a team that has plenty of talent on offer.