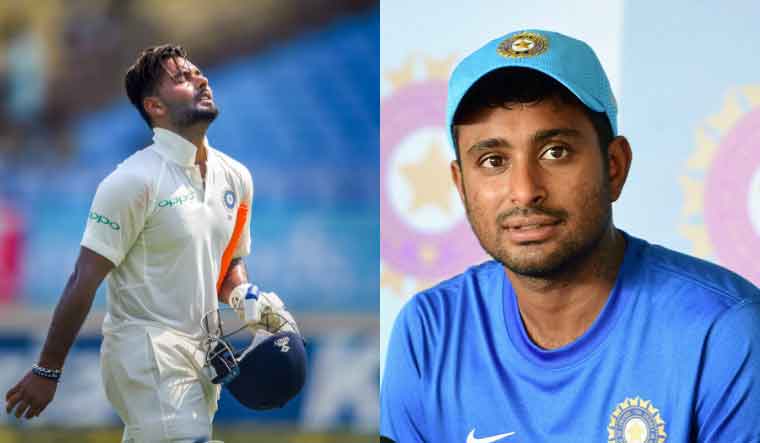 A combination picture of Rishabh Pant and Ambadi Rayudu | File

Monday, April 15, was a sombre day for Rishabh Pant. Post Delhi Capitals' win against Sunrisers Hyderabad, the exciting young wicket-keeper-cum-batsman decided to take a short detour home to be with his family in Dehradun before joining his teammates in Delhi next day. It was his father Rajendra Pant's death anniversary. Later that evening, news came in that he had missed the bus to England.

The national selectors decided to pick veteran Dinesh Karthik as the second wicket-keeper in the Indian squad. For Pant, this was so near, yet so far for the second time—he had missed the spot in the Champions Trophy bound squad in 2017.

The platitudes came in thick and fast. Just 21, there will be more chances, more world cups in future. His omission and subsequent explanation by M.S.K. Prasad, chairman of selectors of the senior national team, led to more questions being raised over his omission. The selectors, however, were unanimous in their choice. Experience, temperamant and lack of impetuousness underlined the Team India squad for the ICC Cricket World Cup beginning May 30 in England. The squad of 15 announced by chairman of selectors M.S.K. Prasad after a 90-minute long meeting at the board headquarters in Mumbai was all about caution and safety. Prasad and team decided not to choose the daring path.

Flash back to March, Indian skipper Virat Kohli was frank and forthright when he said after the India-Australia one day series that only the No. 4 slot in the batting line up was left to be decided in the World Cup bound squad. A month later, all-rounder Vijay Shankar was declared as the chosen one. The 28-year-old from Chennai, is just nine-ODIs-old, but he has, with his ability to bat, bowl and field, effectively pipped 33-year-old original claimant Ambati Rayudu to the post. Vijay Shankar's selection was widely welcomed—Kohli and coach Ravi Shastri's high praise of Shankar during the Australia-New Zealand ODI series a few months ago had clearly made him a serious contender for the No. 4 spot in a short span of time. But it was Pant's exclusion which made bigger news.

Prasad described it as a “balanced side”.

Former chairman of selectors and former India wicket-keeper Kiran More disagreed. “It is disappointing—Pant not being picked,” More told THE WEEK. "He is an impactful player, left-hander and there is no question about his wicket-keeping skills. If that was the case, how is he your Test wicket-keeper? He is keeping well. I would have taken a chance with Pant. [I] Think the selectors got confused a bit about who[m] to pick,” added More.

Pant, despite his success in England and Australia in red ball cricket, was given a chance to rove himself in the Australia ODI series at home. Reportedly, he was found to be still a “work in progress in white ball cricket” and had “some gaps” in his glovework in the shorter formats. What has not reportedly helped his cause is the manner in which he kept getting out during ODI and IPL matches, despite being told to put a price on his wicket.

In the Mumbai meeting, the selectors also reportedly discussed a lot of situational play—what if MSD got injured, who will be a safer keeper—Pant or Karthik? Who will be able to bat better with the tail? Dinesh Karthik outscored Pant on these grounds.

The selectors and the team management have reportedly been having “frank” talks over the last year or so regarding the exact shape of the world cup bound squad. The fact that most of the squad was settled had made their task easier. Both sides interacted regularly keeping in mind the format and conditions in mind. Also, the selectors were mindful of the fact that the squad was restricted to 15, unlike previous time where the strength was 16. This time there was no luxury of an extra batsman or bowler—"the focus was always on having an additional all-rounder along with Hardik Pandya,” said an informed source.

The thinking was that an all-rounder in the eleven would also give Kohli six bowling options, with the other five being three seamers plus all-rounder Hardik Pandya, a specialist spinner along side Kedar Jadhav's useful off breaks. The selectors, it appears, also kept in mind that having Vijay Shankar at the top meant Pandya coming in as low as No. 7, thereby adding depth to the line up. The lack of enough ODI games ahead of the world cup did not reportedly worry the selectors as he has spent two years in the India A set up with coach Rahul Dravid who has ensured the players are ready to take the plunge when thrust into the senior side.

Labelled the tournament's favourites, the Men in Blue's only big chink was the absence of a solid, regular No. 4. Rayudu, Shreyas Iyer, Manish Pandey and Ajinkya Rahane were few of the 11 options tried at this spot by the team management since Champions Trophy 2017.  Rayudu had a head start on the rest, with Kohli going as far as declaring the search having ended and announcing him to be the India number 4.

Between September 2018 and March this year, Rayudu played 21 matches, scored one centuy and four fifties. He was dismissed 20 times on a score below 25 in 2018. Shankar, the chairman of selectors reiterated, will start in the playing XI in the world cup. “We did give a few more chances to Rayudu, but what Vijay Shankar offers is three dimensions. Apart from his batting, he can bowl; if the conditions are suitable, overcast—which we might encounter in England—he might bowl a bit and he's a fantastic fielder,” Prasad said in the press conference.

THE WEEK understands that both Rayudu's temperament and refusal to play first-class cricket went against him. "He is also someone who flatters to decieve—that has been an issue right through his caeer. He did himself no favours by opting out of first-class cricket, too—you can't come in cold into a tournament like the world cup,” said the source.

But then it appears to be different strokes for different folks. Even Dhoni has not played any domestic cricket post February 2017. But then, he had featured in the Australia-New Zealand away series in January-February 2019.

Prasad also stated that the IPL form was not considered while making the final call. However, it is a fact that in opener K.L. Rahul's case, his return to runs and form during the ongoing IPL helped and eased the selectors' concerns. Rahul goes to England as third opener only even though Kohli vacated his spot for him in a few ODIs in few matches, but that is unlikely to happen in the world cup.