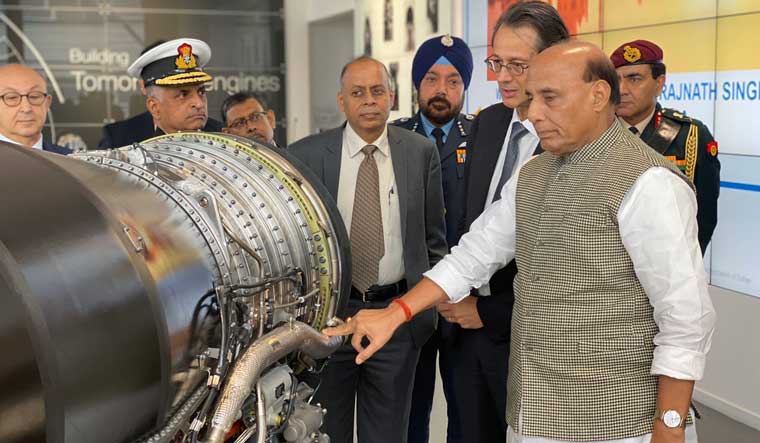 Defence Minister Rajnath Singh made what some would argue was a 'teaser' announcement on Saturday.

Rajnath told a meeting of the Federation of Indian Chambers of Commerce and Industry that during his talks with French Defence Minister Florence Parly, it was agreed that a major French company will produce “an engine” in India. Parly was in India on Friday.

“Yesterday, French defence minister agreed to build the engine with us, so far not made in India. A major French company will come to India and make the engine in strategic partnership with an Indian company,” Rajnath was quoted as saying by The Hindu.

Rajnath gave no details of the project. PTI reported people familiar with the development said the project will be focussed on the requirement for military helicopters that India plans to roll out in the next few years. But some reports said the statement was related to fighter engines.

The Hindu reported “A defence official observed that discussions have been on with Safran of France to develop the engine for the Advanced Medium Combat Aircraft (AMCA) and this was the same engine.” Safran is the largest manufacturer of military and civilian engines in France.

The AMCA is India's project to develop a stealth fighter. The first AMCA, a twin-engine aircraft, is expected to fly by 2025 and will be powered by the F414 engine, manufactured by GE of the US.

The DRDO had announced the use of the US engine would be an interim measure until India developed a higher-thrust power plant. The F414 has a thrust of over 90 kilonewton (kN), while the DRDO is looking to develop an engine with 110kN of thrust with foreign assistance. Higher thrust allows heavier take-off weights, enabling carriage of more fuel and weapons. It also endows an aircraft with greater manoeuvrability, a major advantage in aerial combat and evading anti-aircraft missiles.

On offer for long

Safran has made offers to develop a new engine with the DRDO for more than a decade. Initially, these efforts were linked to reviving the flagging Kaveri project, which aimed to develop a power plant for the Tejas fighter.

In 2018, days before a visit by French President Emmanuel Macron to India, a French newspaper reported Safran was offering its M88 turbofan engine to India to revive the Kaveri project. The M88 engine powers the Dassault Rafale, which is currently in Indian service. In fact, the joint statement by both countries after discussions between Macron and Prime Minister Narendra Modi said, “The leaders noted ongoing discussions between DRDO and SAFRAN on combat aircraft engine.”

The M88 versions currently in use on the Rafale have a maximum thrust of about 75kN. There have been reports Safran was looking for funding to develop a variant of the M88 with over 90KN of thrust, which would improve the take-off and flight characteristics of the Rafale, in particular at high altitudes and hot weather conditions. Some of these reports were notably linked to the UAE's requirements for the Rafale to carry a heavy payload of weapons. Interestingly, the UAE recently signed a deal to buy 80 Rafale jets, the largest export order for the fighter.

Developing and manufacturing a 'growth' variant of the M88 engine for India is expected to be beneficial for both countries. The DRDO would benefit from access to advanced technology and get a viable power plant for the AMCA and possibly the medium-weight fighter, a heavier variant of the Tejas.

A project to develop a version of the M88 will mean the type will generate revenue for Safran even as it works to develop a new engine with Germany's MTU for France's future stealth fighter. France intends to begin fielding the new stealth fighter—named système de combat aérien du futur (future air fighter system)—that would replace the Rafale from 2035.

According to Safran, the new engine for the future air fighter system will be more compact than the M88 while having greater thrust. It is also expected to use advanced materials that would have low heat signatures to preserve the aircraft's stealth characteristics.

Moreover, the development of an upgraded version of the M88 would help France amortise costs as it promotes sales of more Rafale jets to India. Parly had announced on her visit that France was ready to supply more Rafales to India and specifically mentioned an Indian Navy requirement for new aircraft. The Indian Air Force is currently eyeing purchase of 114 new aircraft and the Indian Navy hopes to buy 57 fighters. The Rafale is competing in both tenders, which would have a combined value of over $20 billion.