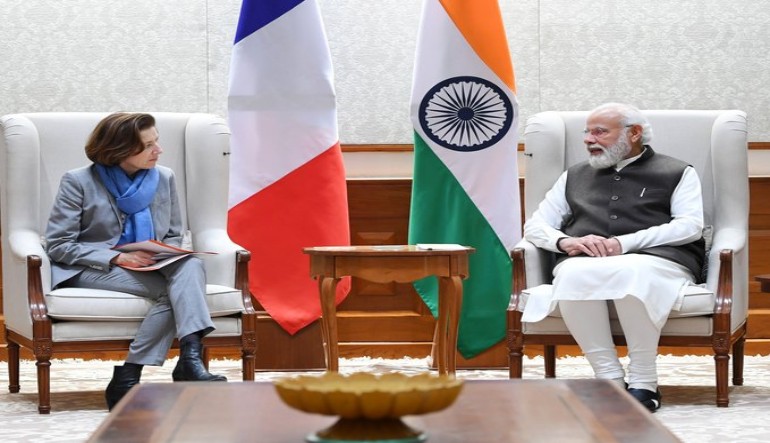 French Defence Minister Florence Parly landed in New Delhi on Thursday. This is the first ever high profile visit from the French government after the formation of security alliance (AUKUS), involving Australia, the UK and the US that had angered France.

France was upset over its exclusion from the alliance, and the cancellation of the France-Australia submarine contract.

It appears that France is now more keen to strengthen its ties with India as the foremost strategic partner in its policy towards the Indo-Pacific region.

Claiming that geography will not change because of AUKUS, Parly said on Friday, "France is an Indo-Pacific country. We want to develop very close multilateral relations.…India is at the centre of this strategy. We had developed very good relations with Australia, then Australia made its decision. I won't comment on that. It is very disappointing for us, but we will continue to be a major partner for all countries who want to develop the same strategy for the region."

"No one should consider themselves as entitled to bypass international maritime law," Parley said before attending the third India-France Annual Defence Dialogue with Defence Minister Rajnath Singh. The two countries have a ministerial level defence dialogue held annually since 2018.

A wide range of bilateral, regional, defence and defence industrial cooperation issues were discussed in the annual meeting, and both leaders reviewed the existing military-to-military cooperation, which has increased in spite of pandemic challenges, a ministry of defence official said.

"They discussed ways to increase defence cooperation in all domains," the official said.

Defence industrial cooperation was discussed with focus on future collaborations and co-production between the two countries. India is already building six Scorpene class submarine in collaboration with a French company.

Expressing her country’s willingness to offer India more Rafale fighter aircraft, she said there is a room for new developments. "We are ready to answer any additional needs or requests that can be made by India.We know that aircraft carrier (IAC Vikrant) will soon be delivered and aircraft are needed. So we are open and ready to provide any other Rafale if this is India's decision".

France has already delivered 33 out of 36 Rafale fighter jets, as part of a deal signed in September 2016 under the inter-governmental agreement. The remaining Rafales will be delivered by April 2022.

Parly had visited India in September 2020 to attend the formal induction ceremony of five Rafale aircraft at the Ambala airbase.

She said India and France need to work together to preserve access to global commons such as cyber, space, maritime and air domains. "We can see that these are areas of strategic competition and must ensure that they don’t become the new far west."