Aero India: Indigenous stealth fighter to initially use US engines 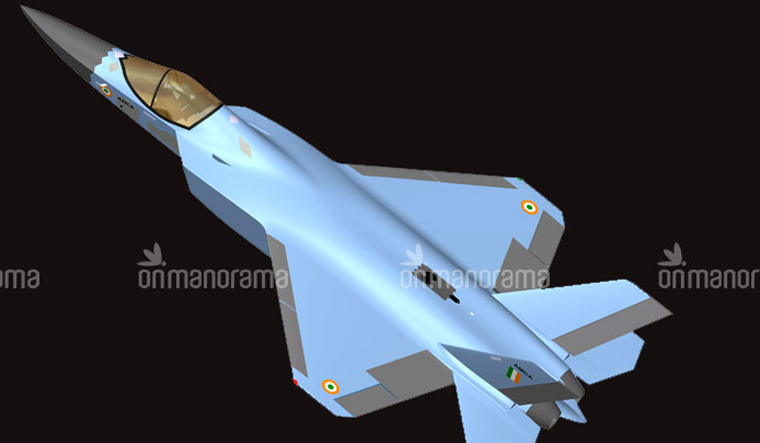 A model of the Advanced Medium Combat Aircraft | Via onmanorama

The Advanced Medium Combat Aircraft (AMCA) project of India has gone deep into the detail design phase now. Along with the Aeronautical Development Agency (ADA), hundreds of scientists spread across at least 20 labs of Defence Research and Development Organisation are now engrossed in critical work to find solutions to a number of next-generation technologies that need to be proven.

With the project definition phase (PDP) getting over in 2017, Onmanorama can confirm that scientists have already walked some distance designing the AMCA, India’s stealth fighter.

The AMCA will be propelled by a US-origin GE F414 engine with a thrust of over 90kN and this will be an interim step by the makers till a higher-thrust engine of 110kN is finalised. The F414 engine, set to power the Tejas Mk-II, will power AMCA as well, till India develops a 110kN engine, possibly in collaboration with a foreign partner.

The current plan is to fly AMCA with the F414 engine for the first six-seven years, in what the designers now term as an ‘interim engine’ for India’s fifth-generation stealth platform. While the design phase has already been sanctioned to commence activities, the final approval for AMCA from the government (Cabinet Committee on Security) is in process.

The plan is to build four prototypes and fly the first one before 2025, which is seven years from now.

The Indian Air Force (IAF) is said to be working out the exact numbers for this future fighter, while the AMCA Directorate at ADA is ensuring a robust foundation for this big-ticket desi project.

The feasibility study for the AMCA began in 2009 with an initial funding of Rs 90 crore. Last year, about Rs 400 crore came in for the detail design phase (DDP), which is expected to be completed in the next three years. Post that, the AMCA will get on to the crucial development phase: Flight testing and eventually certification.

With India finally ejecting out of jointly making the Fifth-Generation Fighter Aircraft (FGFA) with Russia, there was a stalemate over AMCA for a while and now the flight path seems to have cleared.

A full-scale model (1:1) of AMCA is being manufactured by VEM Technologies for stealth measurements.

DRDO is also displaying a scaled model of the Advanced Medium Combat Aircraft with audio-visual effects at Aero India 2019.

The 1:1 model will be taken to the Orange facility in Hyderabad or to Defence Laboratory, Jodhpur (DLJ), for testing the stealth features. DRDO’s Orange facility was opened in 2015 to test current and futuristic weapon systems under development.

The scientists need to measure stealth features on the modular model being developed by VEM Technologies. Modularity is provided, so that new stealth technologies can be immediately incorporated and validated on the model. Orange can provide radar cross section (RCS) measurements and the pylon system at the facility can lift payloads up to 35 tonnes.

“Earlier, you used to make an aircraft and then check its stealth features. Now, from design stage itself, stealth features are part of the optimisation. It was an afterthought earlier, but in a fifth-generation fighter, stealth gets priority,” the official said.

Scientists are hopeful of getting this 1:1 AMCA model ready for tests by the end of this year. Further optimisation of stealth features is under way. This is being done not only by scientists in DRDO and CSIR, but also many academic institutions including IISc in Bengaluru and various IITs.

“Stealth and aerodynamics don’t go hand in hand, so you have to guarantee some minimum performance and optimise for stealth,” the official said.

AMCA has been designed with multi-disciplinary optimisation (MDO) engineering route with stealth as an optimising parameter. (MDO brings in a number of engineering disciplines while finding solutions to complex problems.)

Detailed R&D on materials, paints and structures is being undertaken by various labs now. Study is also under way on flight control, avionics, aerodynamics, composite structure and general systems like brakes, hydraulics and fuels systems.

“We hope to have the first flight of AMCA before 2025 with all the stealth features being established by then. With reduced infrared (IR), we are working on the super-cruise abilities that give the aircraft capability to fly at supersonic speeds without the afterburner,” says the official.

“Parallel efforts to camouflage the aircraft to achieve visual and IR stealth will continue in the next few years,” adds the official.

As this Onmanorama Aero India 2019 special report jettisons into the web space, the AMCA back-room boys are initiating the full-scale engineering development (FSED) plans for AMCA.

India’s home-grown fighter programmes are on inspiring flightpath now, with the scientists gaining confidence in converting dreams into reality at a relatively faster pace. The lessons from LCA will probably act as a ready-reckoner.

(The writer is an independent aerospace and defence journalist, who blogs at Tarmak007 and tweets @writetake.)