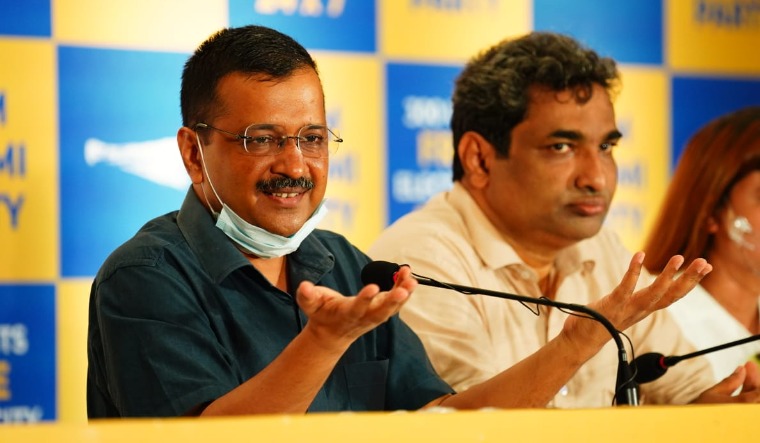 Aam Aadmi Party national convener Arvind Kejriwal on Wednesday said he felt "encouraged" as even opposition leaders are talking about his party, a day after Congress MLA Navjot Singh Sidhu tweeted that the AAP has always recognised his vision and work for Punjab. “Navjot Singh Sidhu? He is in Punjab. I am happy that AAP is doing such a good job that even opposition leaders are praising us. So, one feels encouraged about it,” the Delhi chief minister told reporters when asked about Sidhu's tweets. Kejriwal is on a two-day visit to Goa.

"Our opposition AAP has always recognised my vision & work for Punjab. Be it Before 2017- Beadbi, Drugs, Farmers Issues, Corruption & Power Crisis faced by People of Punjab raised by me or today as I present ‘Punjab Model’ It is clear they know - who is really fighting for Punjab," Sidhu said in a series of tweets. Sidhu's tweets came amid attempts by the Congress high command to resolve infighting in the party's Punjab unit and speculation that he may be appointed as the state unit president.

Kejriwal on Wednesday said each family in Goa will get up to 300 units of electricity free per month if AAP is voted to power in the state Assembly elections. Elections to the 40-member Goa Legislative Assembly are scheduled in February next year. “Every family will get up to 300 units per month free electricity,” Kejriwal told reporters in Panaji. “If people in Delhi can get free electricity, then why not free power for people in Goa?” Kejriwal asked.

Despite Goa being a power-surplus state, there are frequent power cuts in the coastal state, he added.

Kejriwal slammed MLAs who left Congress and other parties to join the BJP after the last Assembly elections in Goa. Going by the numbers, those who should have been in opposition are now ruling the state and those who should have been in power are now in the opposition, he added. “These MLAs who switched sides claimed that they were joining the BJP to get people’s work done. Did they do people's work as they claimed? Now people are saying that they switched sides for lure of money. People feel betrayed,” he said.

Thousands of Goans are claiming they will not vote for either BJP or Congress in the next elections, Kejriwal said. “Goa wants change. People want clean politics,” he said.